After I watched the video, "Blind Spot" (linked to here), I began re-reading this blog: Life After the Oil Crash. Of course I became aware of the issue of impending resource depletion upon first learning about the dangers of a changing climate, and the other greenhouse gas emissions that happen to kill trees, because they are closely related. I've called Peak Oil, along with the economic collapse, and climate change with environmental destruction, the great Trifucta although oddly enough, many people who are concerned about Peak Oil are sanguine about climate change, and vice versa. 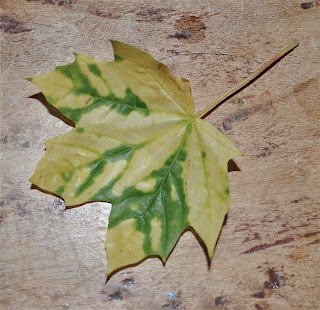 I guess, it's hard to panic about too many things at once. Life After Oil has an excellent explanation of how soon - and how violent - and why, the Oil Crash inevitably will occur. It's almost scarier than ecosystem collapse! So naturally, I highly recommend visiting and reading. Because...why not?
I have been meaning to photograph a particular Japanese maple, because it is a vivid example of the strange pigmentation of foliage this spring...and yesterday finally had a little time, just after the rain stopped. Like the leaf lacking chlorophyll above, this foliage is not properly photosynthesizing in the toxic atmosphere we have created by burning fuels. 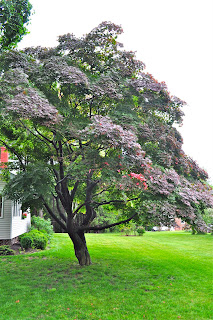 The layers exposed to sunlight are a distinctly different color than the leaves underneath, which could be because ozone is created when volatile organic compounds interact with UV radiation. 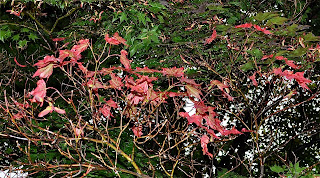 The leaves on this branch are stunted and bright red.

The closer I got, the more bizarre the layers of foliage became. 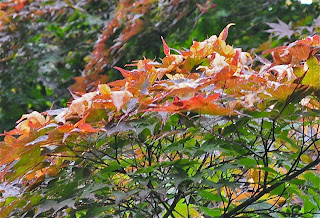 And then, I realized, that the uppermost levels look so light because the leaves are singed. 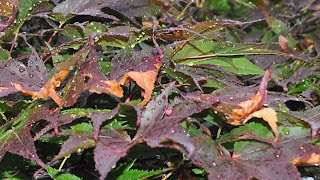 The tips and edges are burnt. 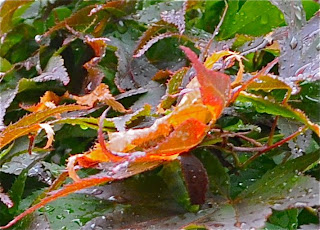 Under the canopy I got a good look at the trunk. 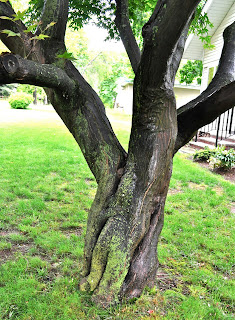 It is strewn with lichen, and the bark is splitting. 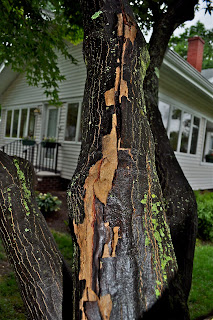 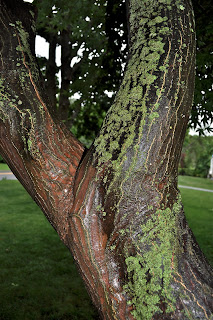 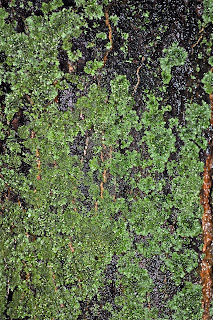 The hotter the temperature, the higher the level of ozone. As it is only May, I expect we will see very severe impacts on foliage as summer heats up in the months ahead. 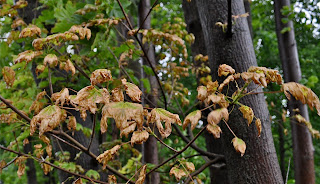 Even very young maples already display the symptoms of damage from exposure to atmospheric toxins. 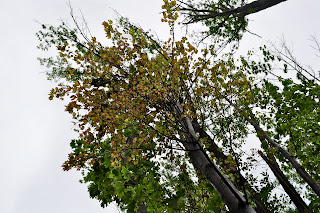 Wild cherry leaves are likewise turning brown. The same thing happened last year, but now it is markedly worse. It's obviously a rapid trend in a very bad direction. 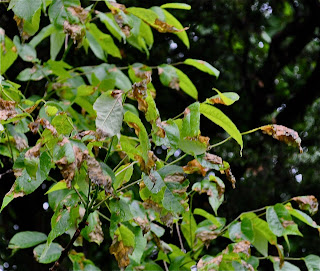 It was exciting to find a very large specimen of Laetiporus sulphureus. 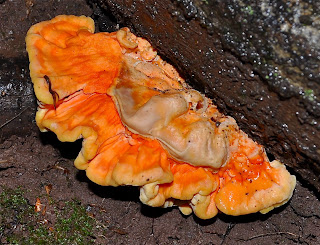 This is colloquially known as chicken of the woods. 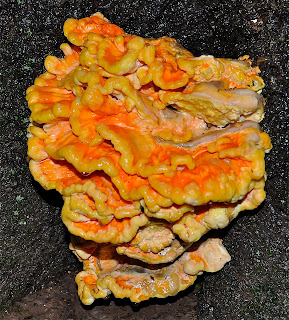 It is edible, but not nearly as delicious as chanterelles or morels. 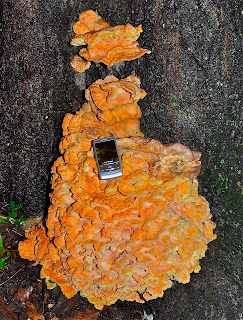 Such a great huge specimen, my cell phone is dwarfed by it. From wiki:

"This fungus causes a brown cubicle rot and embrittlement which in later stages ends in the collapse of the host tree, as it can no longer flex and bend in the wind." 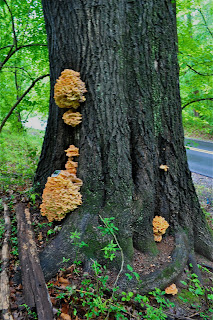 What a tremendous old oak! The idea of a world without trees is unimaginably bleak.
Posted by Gail Zawacki at 6:52 PM