Not for the first time, I have lately been accused of being too depressing, too negative...even, I have been labeled a doomer blog, at the bottom of this link! Although I am honored to be compared to the incomparable Doomer Report, I feel like this is kind of harsh. All I am trying to do is illuminate. 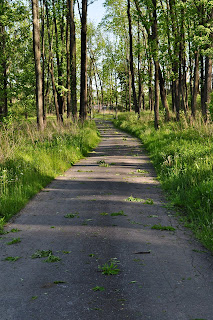 The driveway to Wit's End this weekend is a case in point. It's only the beginning of May, and yet clumps of leaves are falling off of the trees. Of course, there are some exquisite flowers blooming! 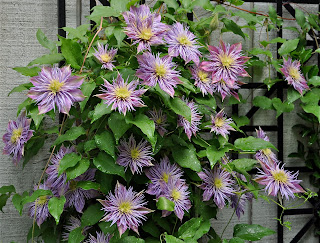 which, to the extent I can, I prefer to emphasize. 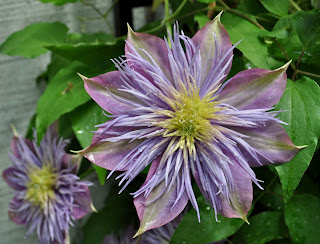 And I continue in my pursuit of birds. 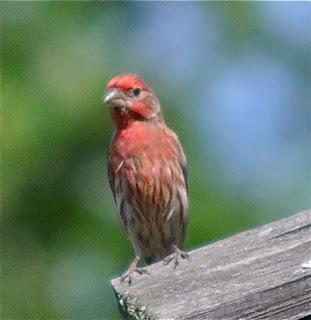 Okay, he looks annoyed...this one is collecting food for babies under the kitchen window. The honeysuckle is blooming 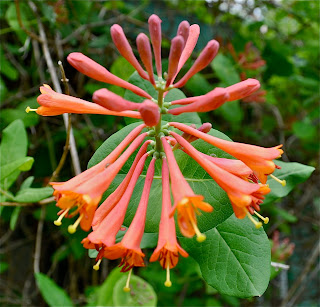 as are the iris 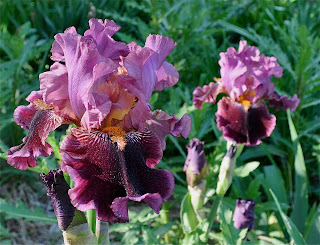 out in the woods, the wild phlox are in full glory

this batch seems to be mixed with iris 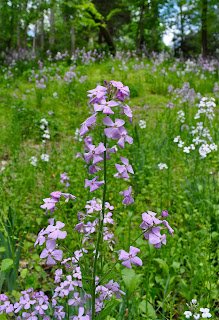 I don't know if it is a cultivated variety gone native? 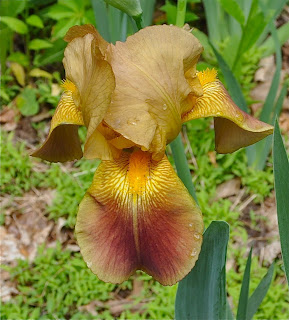 But NOW, we get to the usual doomy gloomy stuff. I try to limit my travels and so for the most part, I make observations from wherever I happen to be. Today, I was near this mall and decided to order some pad thai from a restaurant there, for dinner. For the ten minutes it took to prepare, I walked around the perimeter of the buildings, and snapped these pictures. 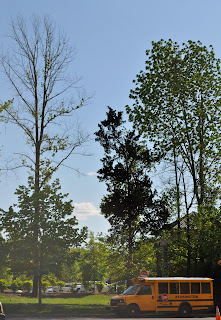 Every single tree is in terminal decline. 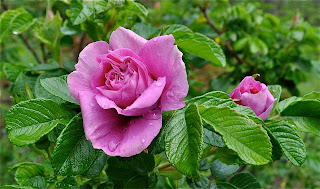 OKAY! I'll break it up with flowers from the garden. 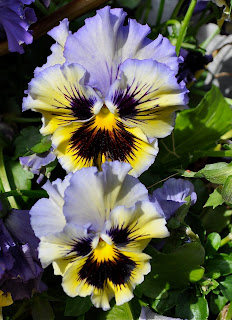 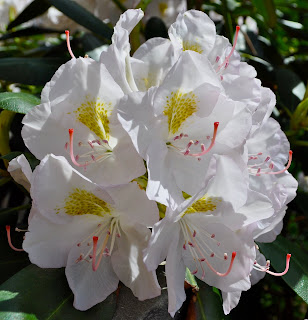 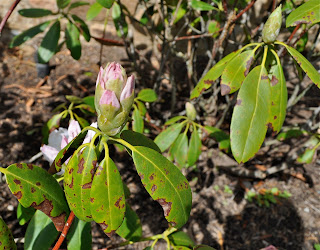 Except for the leaves, with the classic damage to stomata from exposure to toxic greenhouse gases. 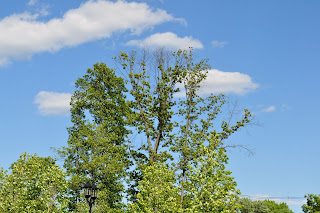 Treetops all around the parking lot 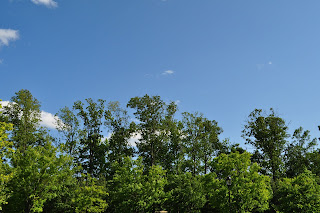 exhibit branches that are missing leaves 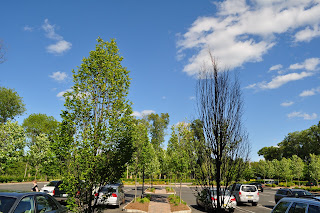 there are many with NO leaves 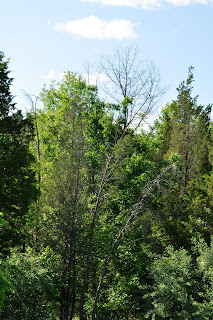 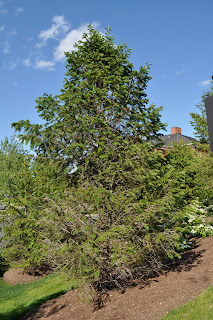 even the recently planted pines have seriously bare branches 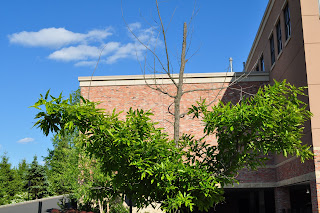 the entire center trunk of this tree has no leaves whatsoever 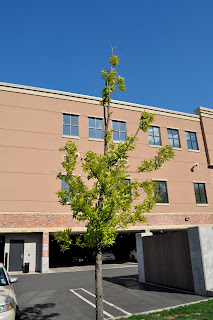 nor does this one 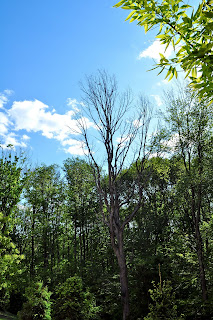 at this point I am just about around the entire complex 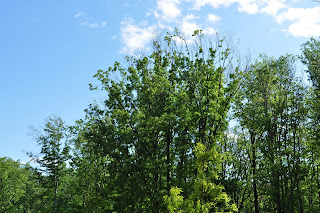 about to come back around to my car 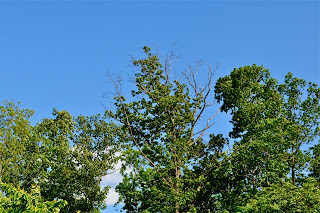 the compete route has been nothing but trees lacking leaves 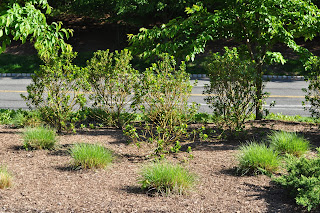 and evergreen shrubs that should be a wall of solid greenery 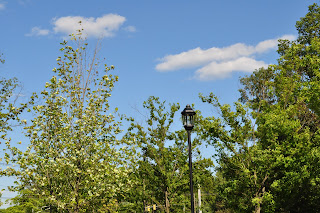 This microcosm of decline is replicated all over the state, and the East Coast 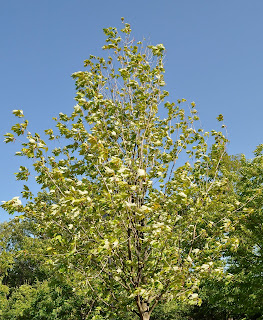 and the world. These limp leaves are representative of every other place on earth that is being compromised 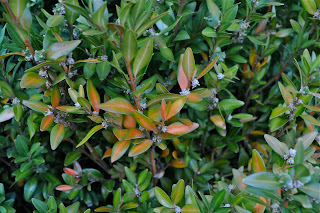 by toxic greenhouse gases. Ah! The apple tree has some babies. It's NOT TOO LATE. Let's stop emitting poisons, even if it means living in a teepee! Isn't that better than starving to death?? 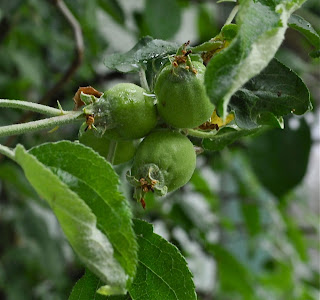 I'm starting to come around to the idea that things are so bad, that the elite are probably preparing. Rather than make any rational steps to mitigate the looming disasters from climate change, pollution, habitat destruction and resource extraction, the powers that be appear to be gobbling up as much as they can, enriching themselves through an ongoing, extreme stratification of wealth. It could be they are stupid, or it could be they realize there is no saving of much of humanity and so they are garnering as much for themselves as they can while they can get away with it.
Who are these elite? I don't know, I'm certainly not one of them. I should think some of the top military, for sure.
Now to this mix of dangers, add in market sceptics food inflation and
stories like this one about doomsday shelters for multi-millionaires make me wonder! 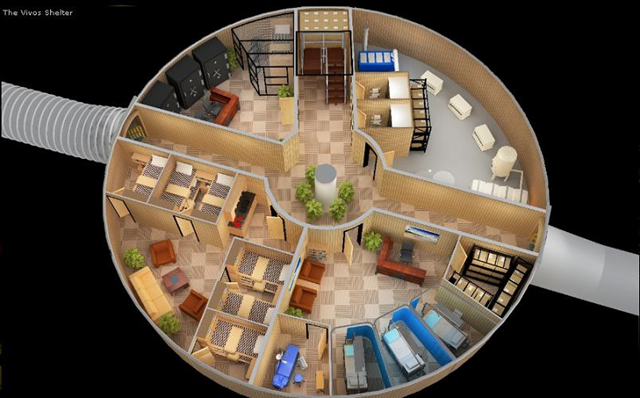 So naturally I put in the comments a link to this story, which lists the essential equipment you need to survive...
And then there's this.
Posted by Gail Zawacki at 6:28 PM