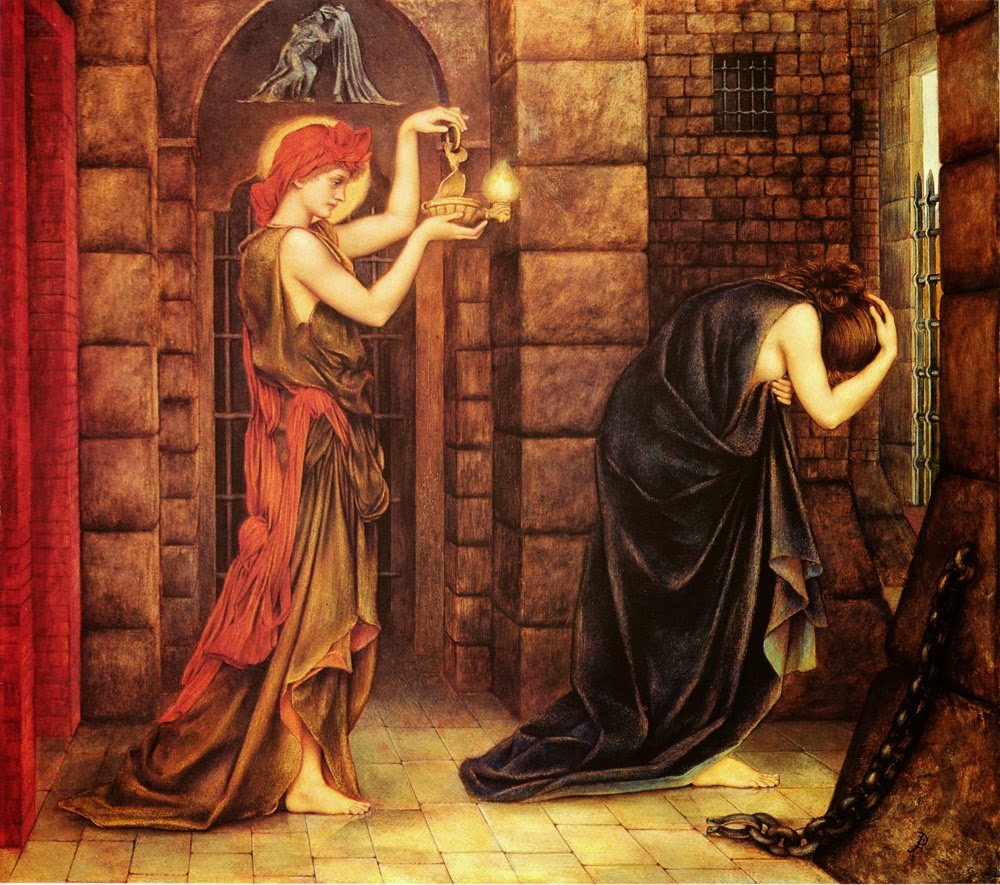 Hope in the Prison of Despair
~ Evelyn de Morgan

Sooo...is there any hope?  No!  I'm afraid not...not if we are referring to a thriving, vibrant web of life.  The ecosystem is at it's last gasp, and fading fast.  Trees are barely leafing out this spring, struggling more than ever before.  The leaves of some - especially black walnut and sycamore - appear to be in suspended animation, paralyzed and only partially unfurled, while many others have branches protruding from their canopy that remain completely barren.  Still others, in swathes, are standing dead - snags, as they are known to foresters.  This post is just meant as a quick update, with pictures from an arboretum near Wit's End, generally representative of the scenery when they were taken on May 25.

Admittedly, New Jersey where I live has the dubious distinction of being one of the world's regions to lead the trend, in the vanguard of pollution - see this map of nitrogen dioxide emissions which are primary ozone precursors.
This map is a bit out of date and by now the NOx traveling around the globe especially from Asia - along with rising emissions of methane from fracking and who knows how much from melting permafrost - results in an overall increase of background ozone.  I saw for myself that the condition of trees and other plants is indistinguishably horrendous, from here to Florida.  The damage is irrespective of age. 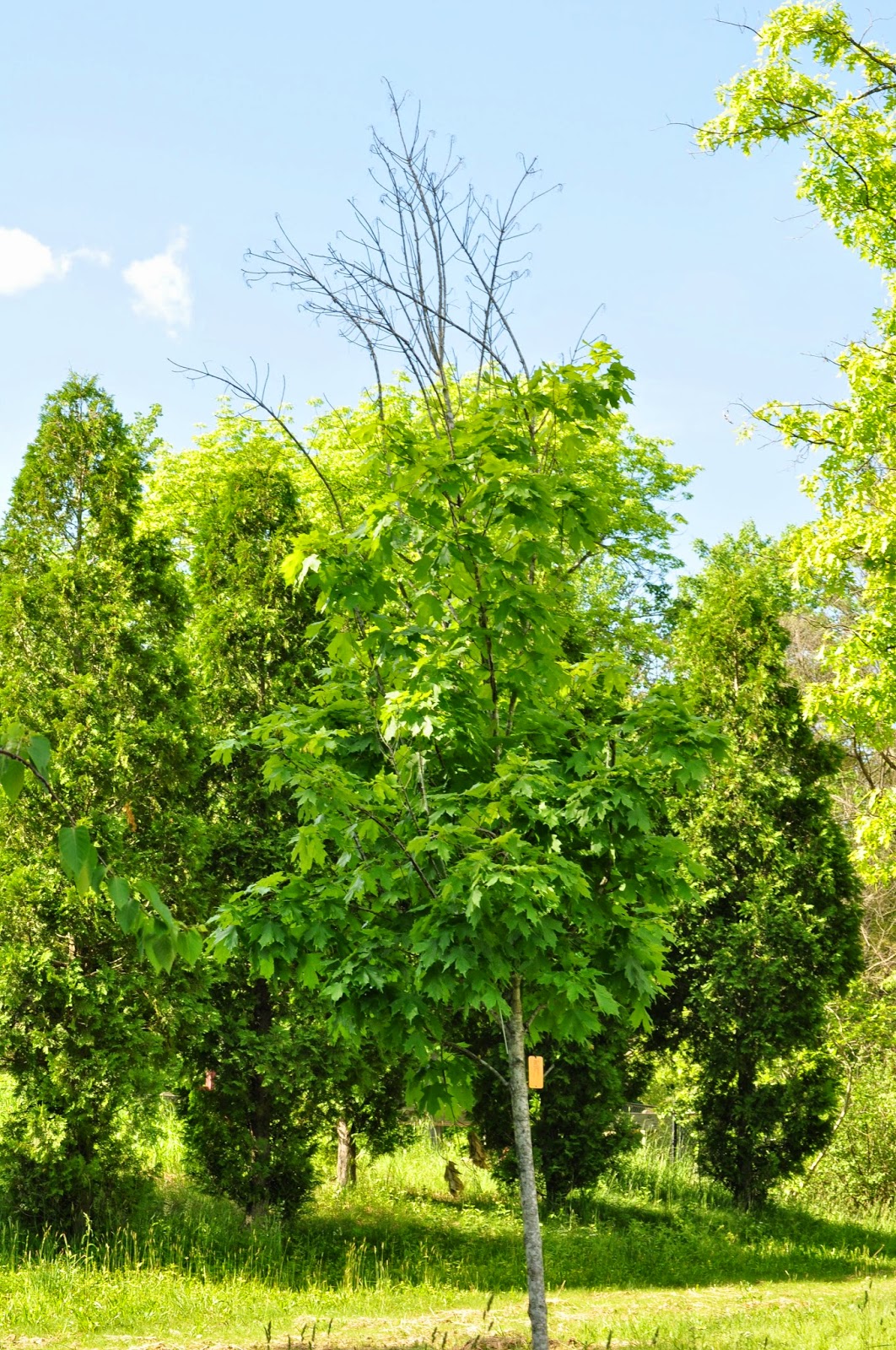 It is also irrespective of species.  Below are some very tall oaks. 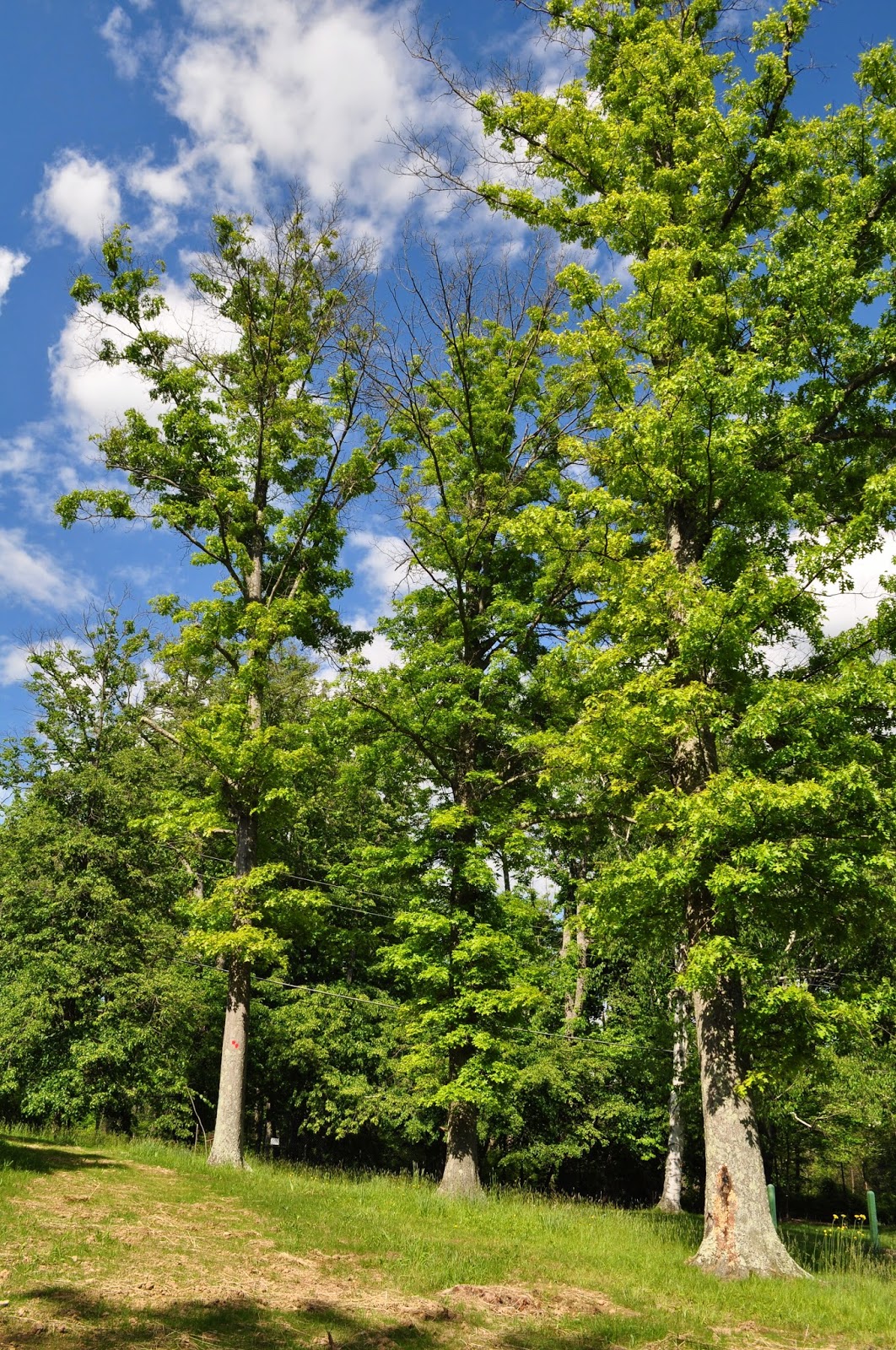 Under normal circumstances, their obvious ill-health would be so alarmingly hazardous they would be chopped down instantly...but, aside from the fact that people have become inured to even the most dire symptoms, there are simply far, far too many trees that look like this now for landscapers to keep up with. 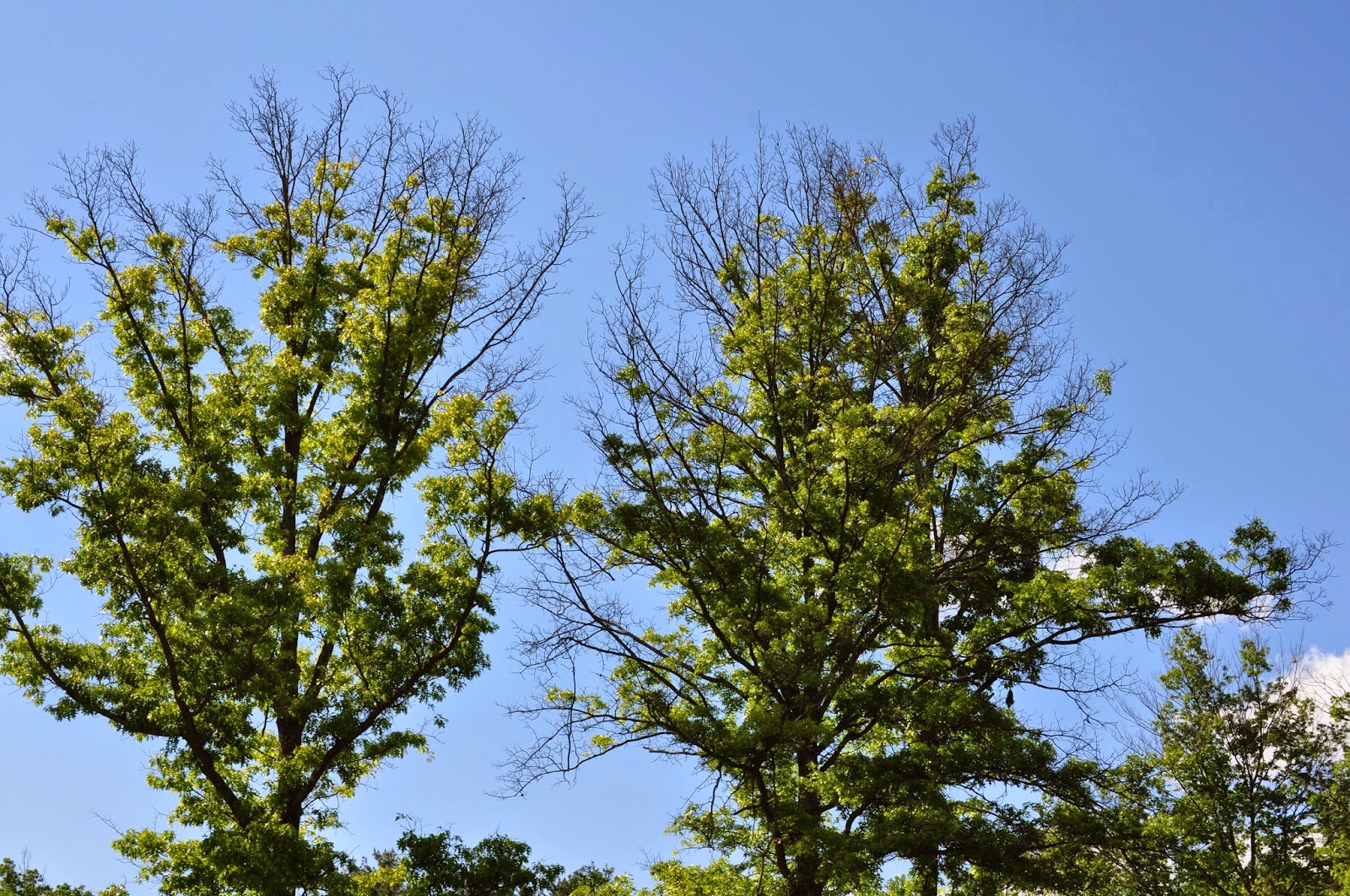 The seeping trunk is another indication of interior rot, probably hastened by opportunistic fungal infection. 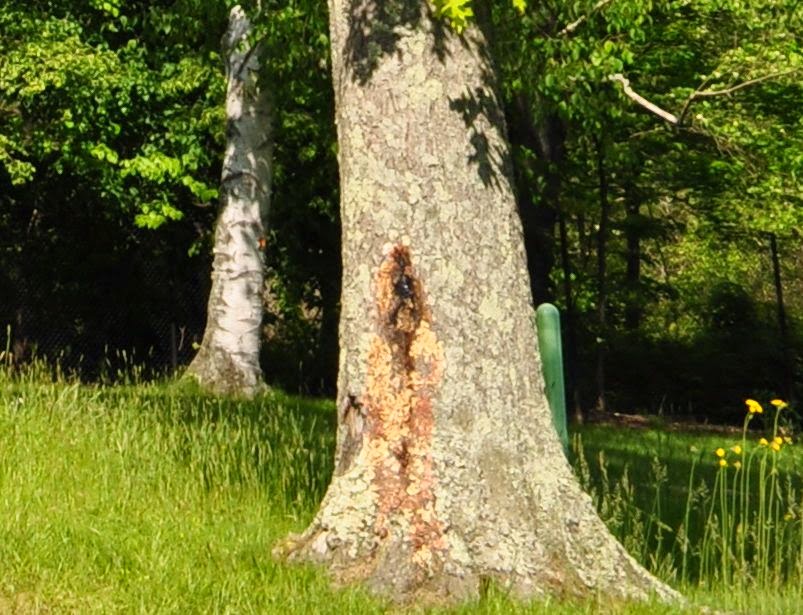 Here is a link to a short article that explains the problem with reactive nitrogen rather nicely, which was followed by this perspicacious comment by one Nicholas C. Arguimbau:

"It is of course not nitrogen (N2) but nitrogen oxides with various molecular formulae, known collectively as "NOx", that are the problem. Because air is 80% nitrogen, if you oxidize a carbon compound at a high enough temperature in air, some of the nitrogen burns too. Our oxidation of carbon compounds in food takes place at body temperature inside cells where there is no nitrogen, so NOx is not produced by biological oxidation of carbon compounds. The problem arise when you burn a carbon fuel at hundreds or thousands of degrees."

"A particular problem is that the higher the operating temperature, the higher the amount of NOx produced in a burning process. Engine efficiency also goes up with temperature. Consequently, an efficient engine produces about the same amount of NOx per BTU as an inefficient engine, so almost regardless of the kind of fossil fuel you use and the efficiency, NOx produced per BTU remains the same. This makes it very difficult to regulate NOx emissions - reduction of NOx pretty much essentially means reduction of energy production. Because of this, EPA has always hesitated to regulate NOx despite its seriousness."

The tiresome correlation between climate change and forest decline will probably never be acknowledged as specious until it actually comes to dominate the issue, but meanwhile, here's a recent mapping of warming from Scientific American, showing that temperature increase has been very uneven.  Fascinating that the midwest and the Appalachian mountain range, among the worst damaged forests thanks to all those coal-fired power plants, have warmed the least, as has much of Amazonia in Brazil, another place with serious forest decline. 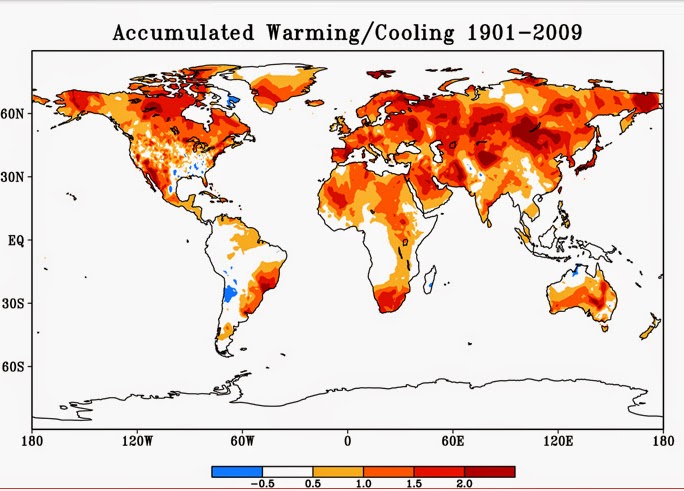 Western Canada, too, has been largely spared the highest temperature increases, and yet it, too, has massive tree deaths.  Even the southern part of Alaska hasn't warmed nearly as severely as further north, and yet that is where a huge wildfire is raging: And no wonder, look at this picture of the Kanai National Wildlife Sanctuary, undated but no older than 2013.  All those white lines are trees dead so long they haven't even got any bark left.  No doubt if examined on the ground, many that aren't snags already would be thin. 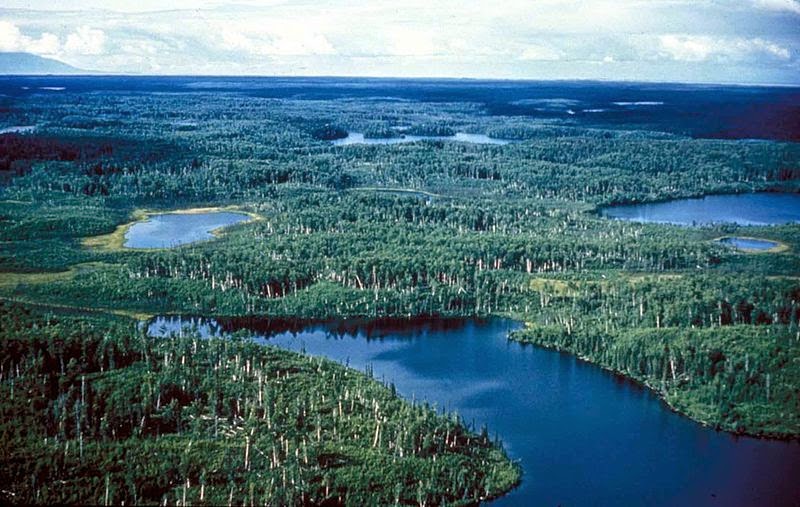 From a US Forest Service publication:  "Ozone and elevated N deposition cause speciﬁc changes in forest tree C, N, and water balance that enhance individual tree susceptibility to drought, bark beetle attack, and disease, and when combined, contribute to whole ecosystem susceptibility to wildﬁre."
This NASA image based on satellite data indicates the number (not the size) of fires around the world from May 1 to 10.  Some of them are deliberately set to clear fields, but the forest fire locations seem to bear little connection to warming trends with the possible exception of the line across the Russian permafrost. 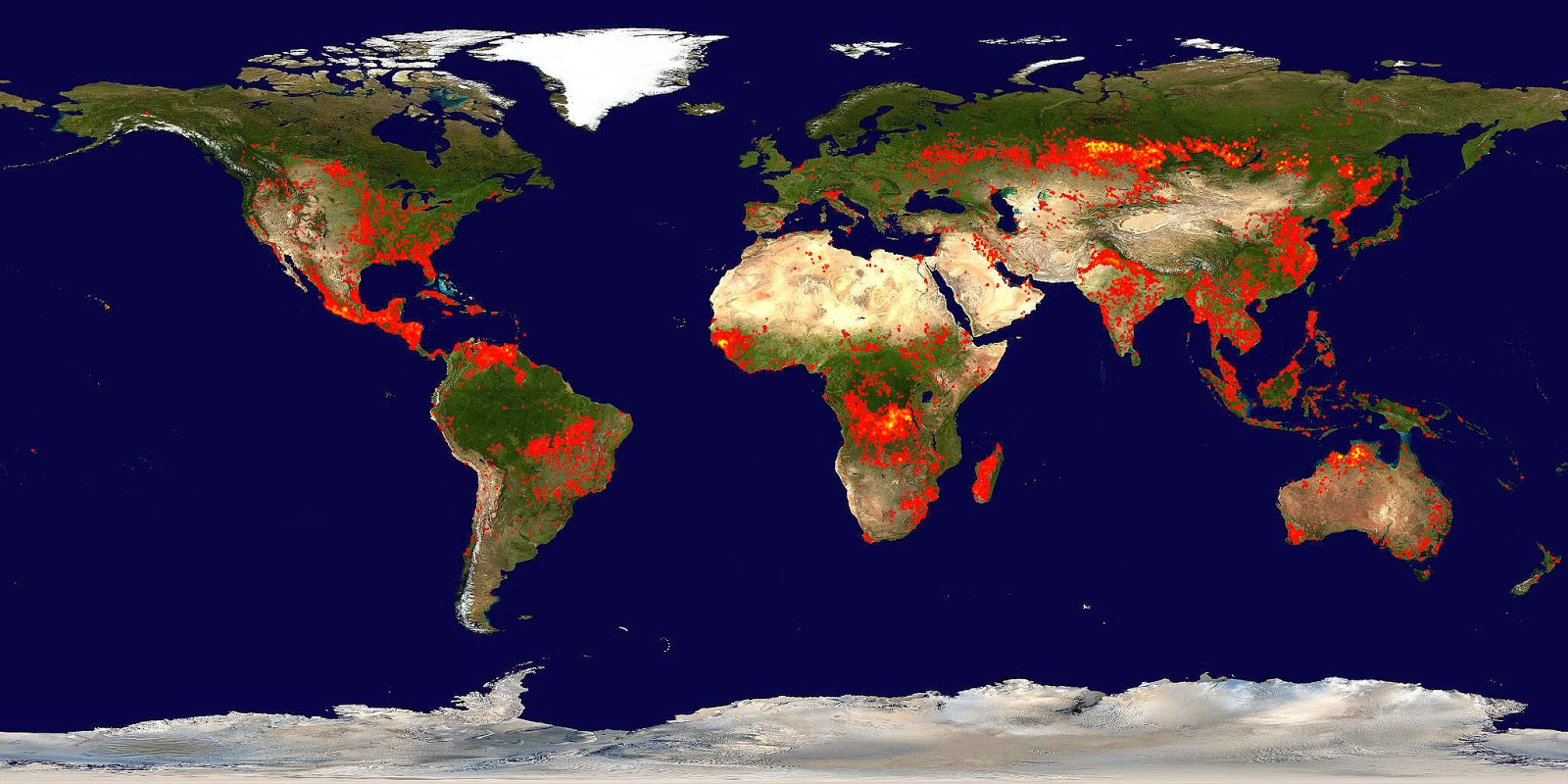 People continue to freak out sporadically as stories of crop failures due to fungus, disease and insects surface, and then recede as though the problems had gone away.  Recently coffee fungus was in the news, with warnings that prices will rise due to the worst outbreak ever, and jobs will be lost in producing countries, leading to more poverty and violence.  So note that the Central American countries that are being worst hit with the fungus are among the least affected by warming - and, that the fungus is made worse by rainy weather - so it's not drying, either. 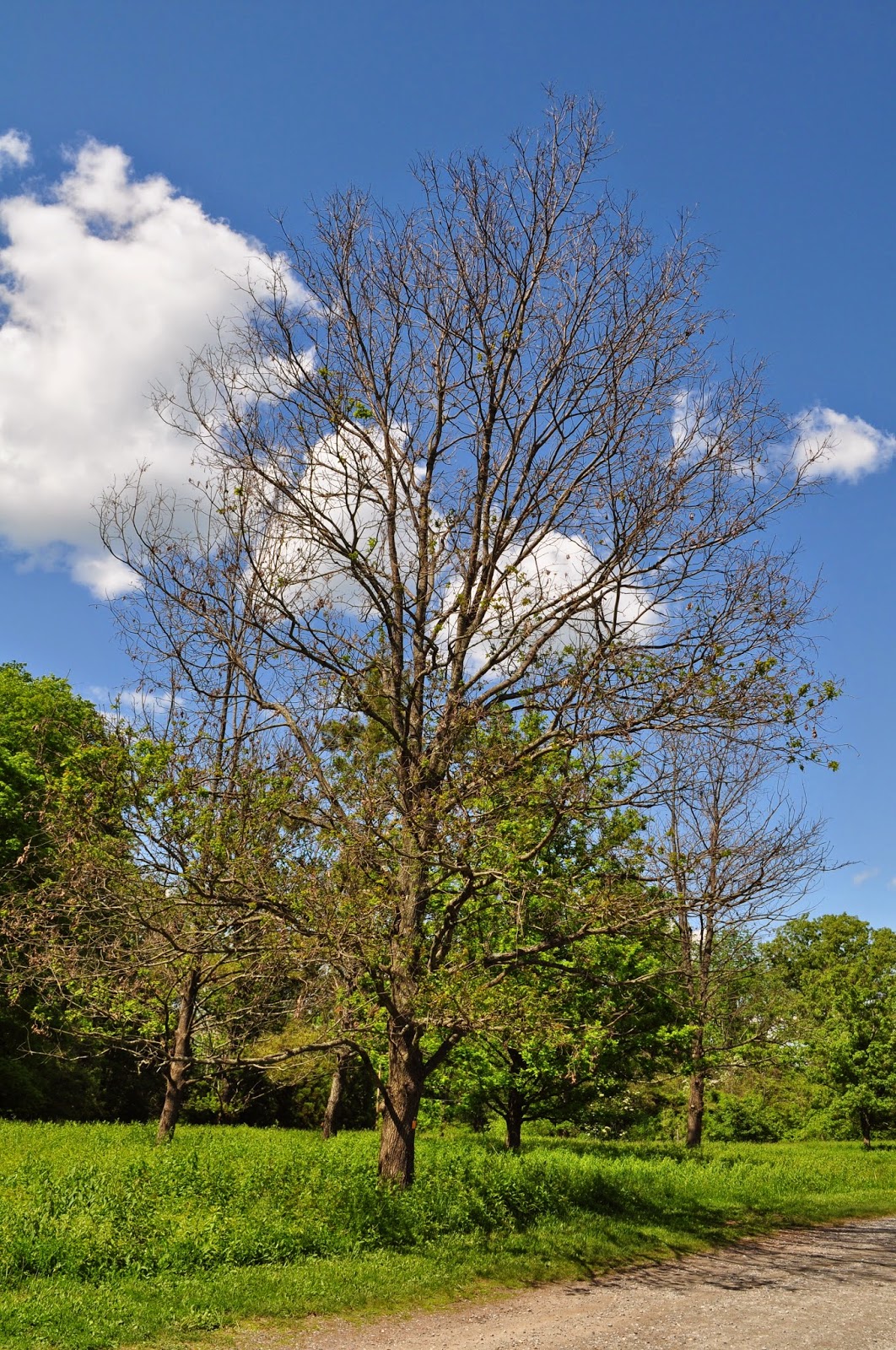 I cannot understand why these stories are reported without any mention - EVER - of the well-documented influence of ozone on biotic pathogen outbreaks.  In a USDA webpage devoted to research looking for ozone "resistant" cultivars, it states that: 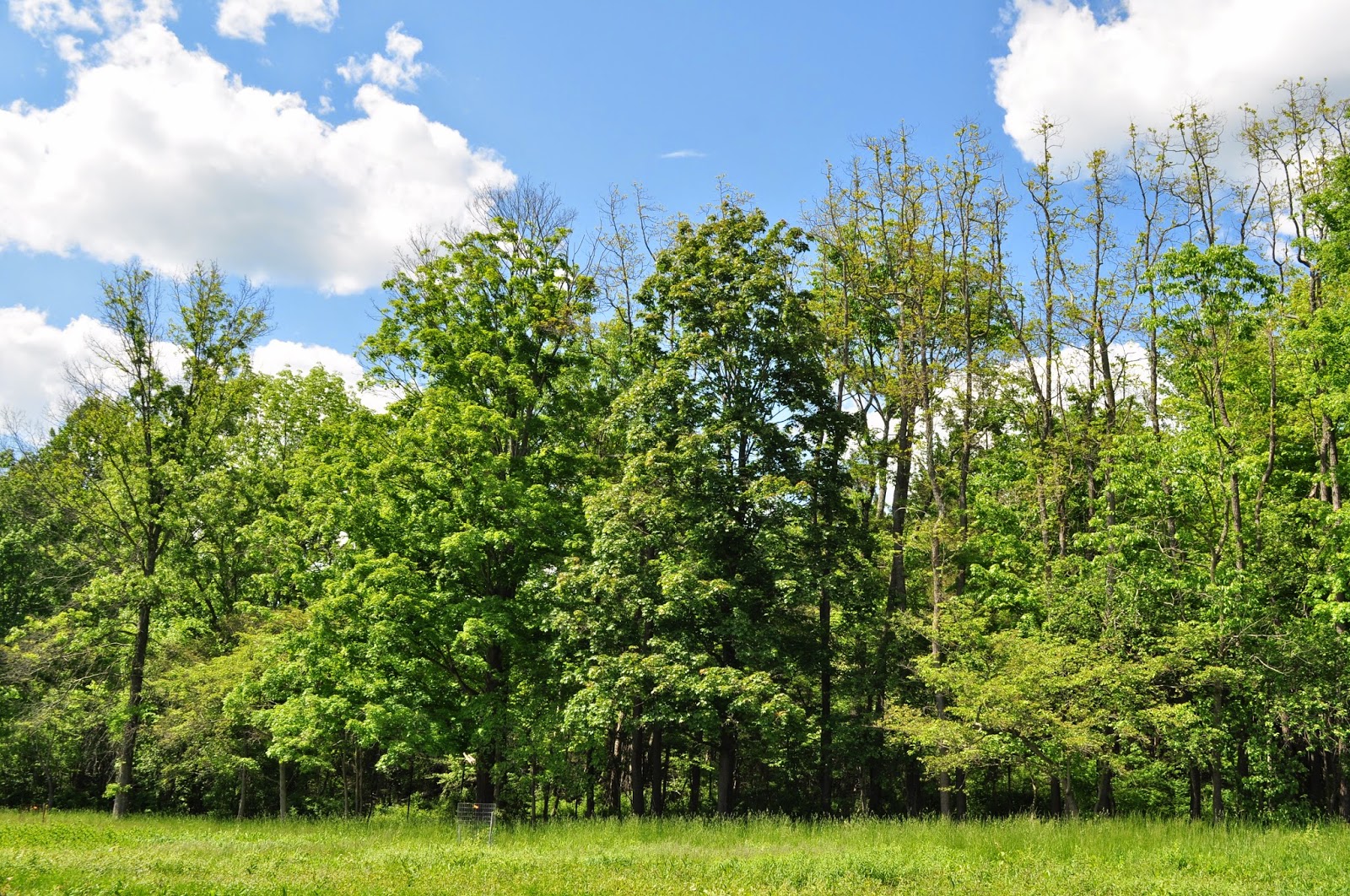 Ozone: Plants Don’t Like It
Ozone is a greenhouse gas found in smog. It is formed mostly when sunlight “cooks” automotive and industrial pollutants that originate from combustion of carbon-based fuels.
Ozone is the most damaging air pollutant to plants. 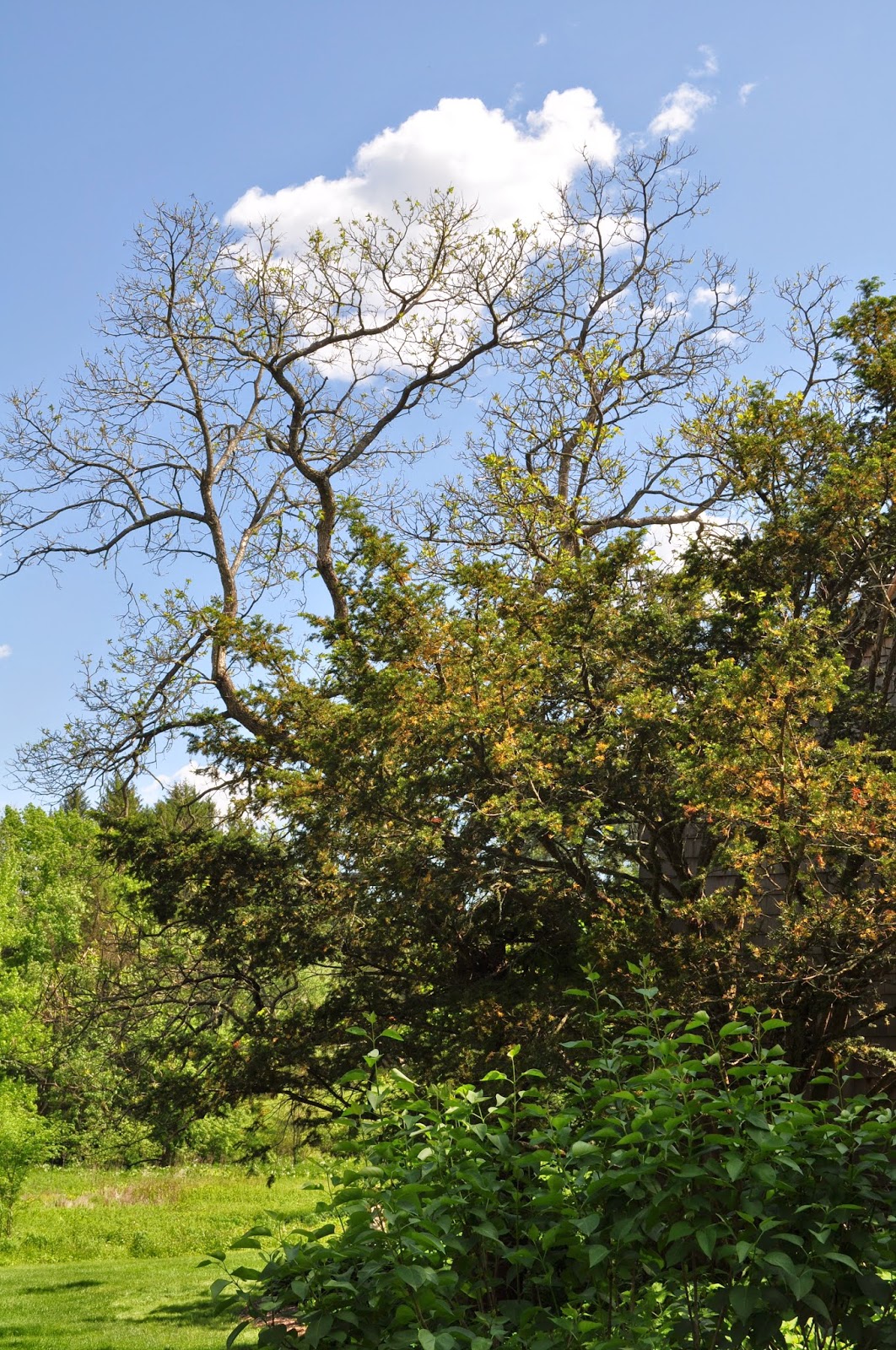 Fitz Booker, an Agricultural Research Service plant physiologist at the Plant Science Research Unit at Raleigh, North Carolina, says, “Ozone has long been known to affect a wide range of plants, including grasses, field crops, horticultural crops, and forests. Our research and that of other scientists has shown that many crops and forages are damaged by high ozone levels, including soybeans, wheat, cotton, oats, potatoes, rice, peanuts, tomatoes, grapes, alfalfa, clover, and barley.” 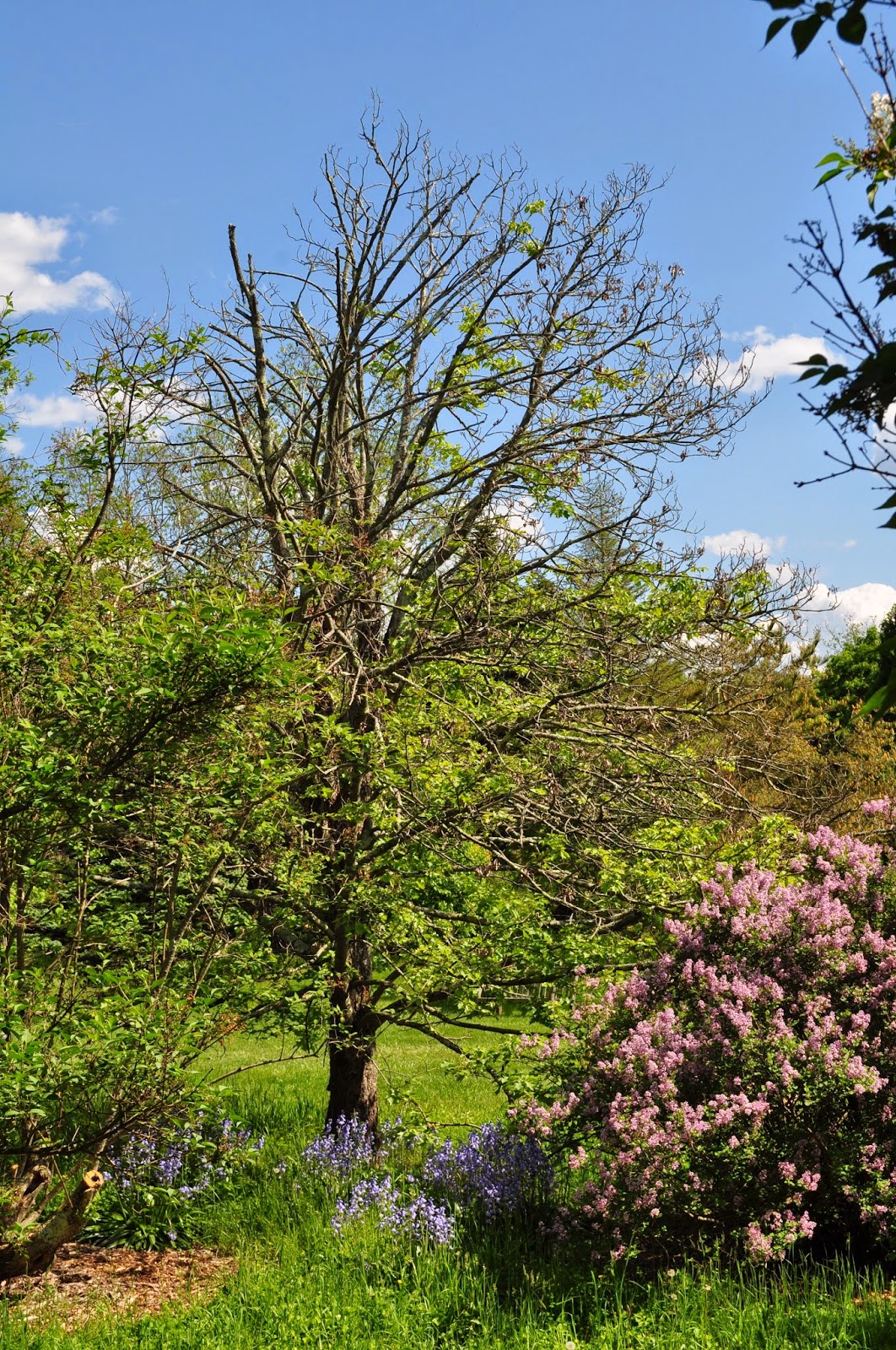 In fact, during the 1950s, Howard Heggestad (deceased) discovered that what were thought to be symptoms of a plant disease on tobacco leaves in the smoggy Connecticut River Valley was actually damage from ozone. In the Washington, D.C., area, he found similar damage to plants from ozone in smog. At the time, Heggestad was an ARS plant pathologist.
Globally, yield losses from ozone have been estimated at $14 to $26 billion for rice, soybean, corn, and wheat combined. 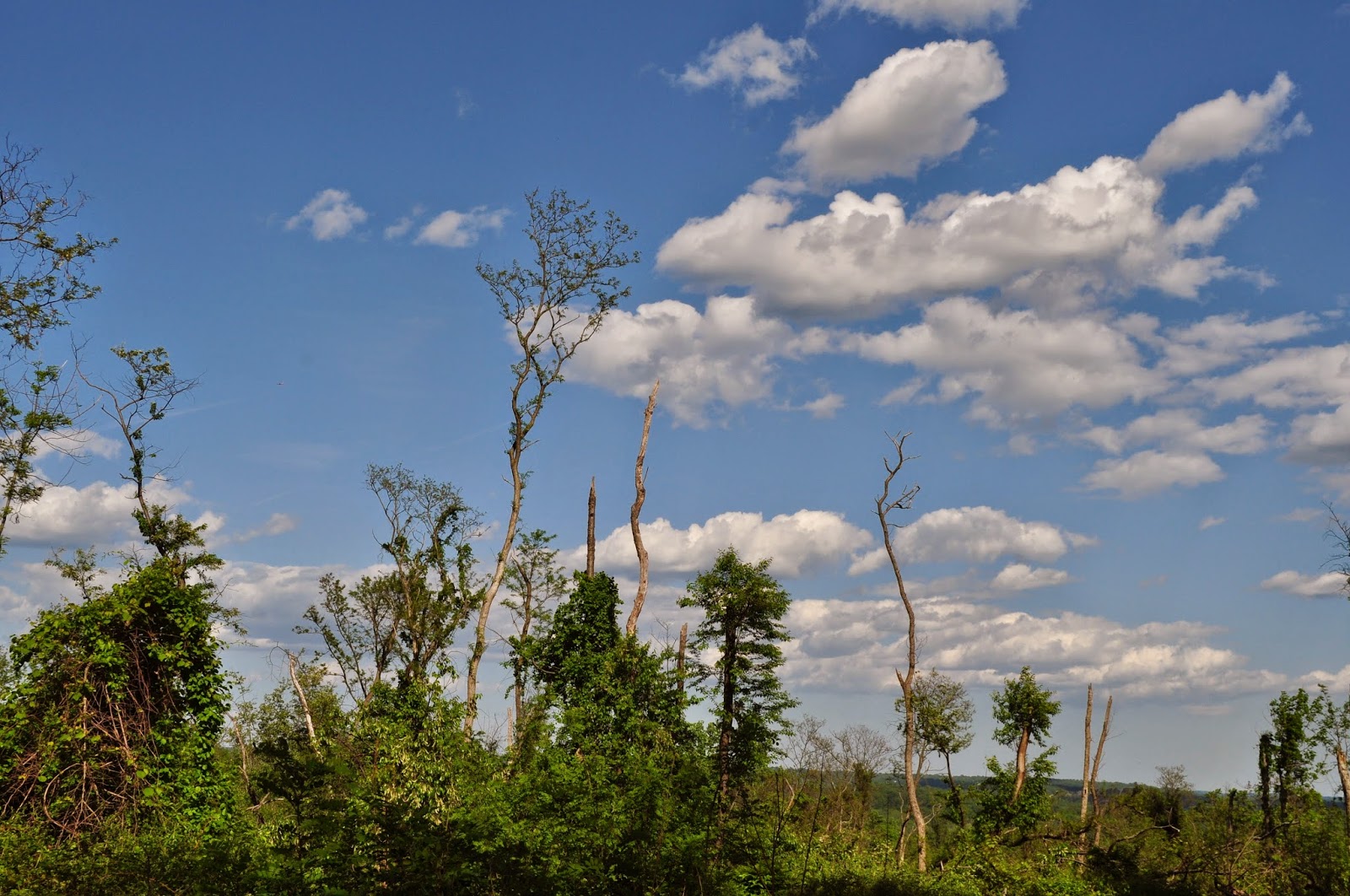 “We are beginning to look at interactions between ozone and diseases such as stripe rust and stem rust of wheat,” says David Marshall, research leader of the Plant Science Research Unit at Raleigh, and an expert on wheat rusts.

But lets get to the fun part of tracking tree deaths.  This is the caption to the photo, below, that was posted on Facebook by a resident of the UK:  "Here is the perfectly healthy mature 100ft tree that fell on my parked car when there was no wind. It's roots were shot after extended periods of rain and drought. Happening all over the forest." 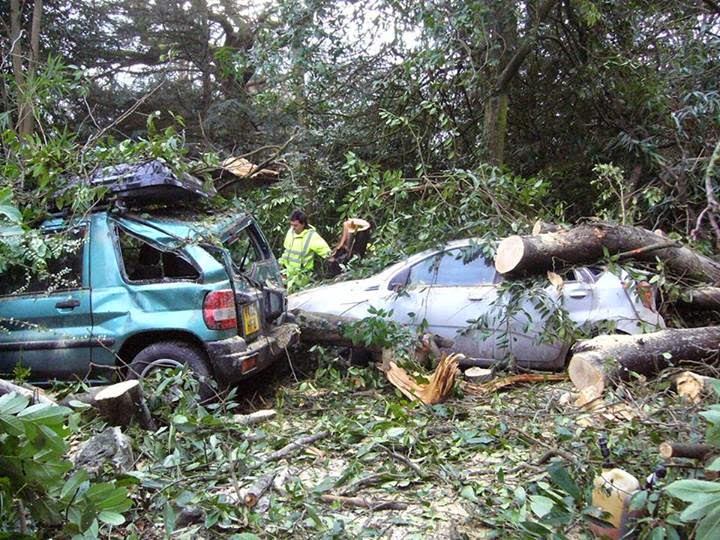 So naturally I pointed out (quoted at this post):  "The N deposition levels at which these effects begin to occur are not well deﬁned, but regression analysis indicates a 25 percent reduction in ﬁne root biomass at 17 kg ha-1 yr-1; dramatic shifts in tree phenology and C allocation are evident at a site with N deposition of 39 kg ha-1 yr-1." 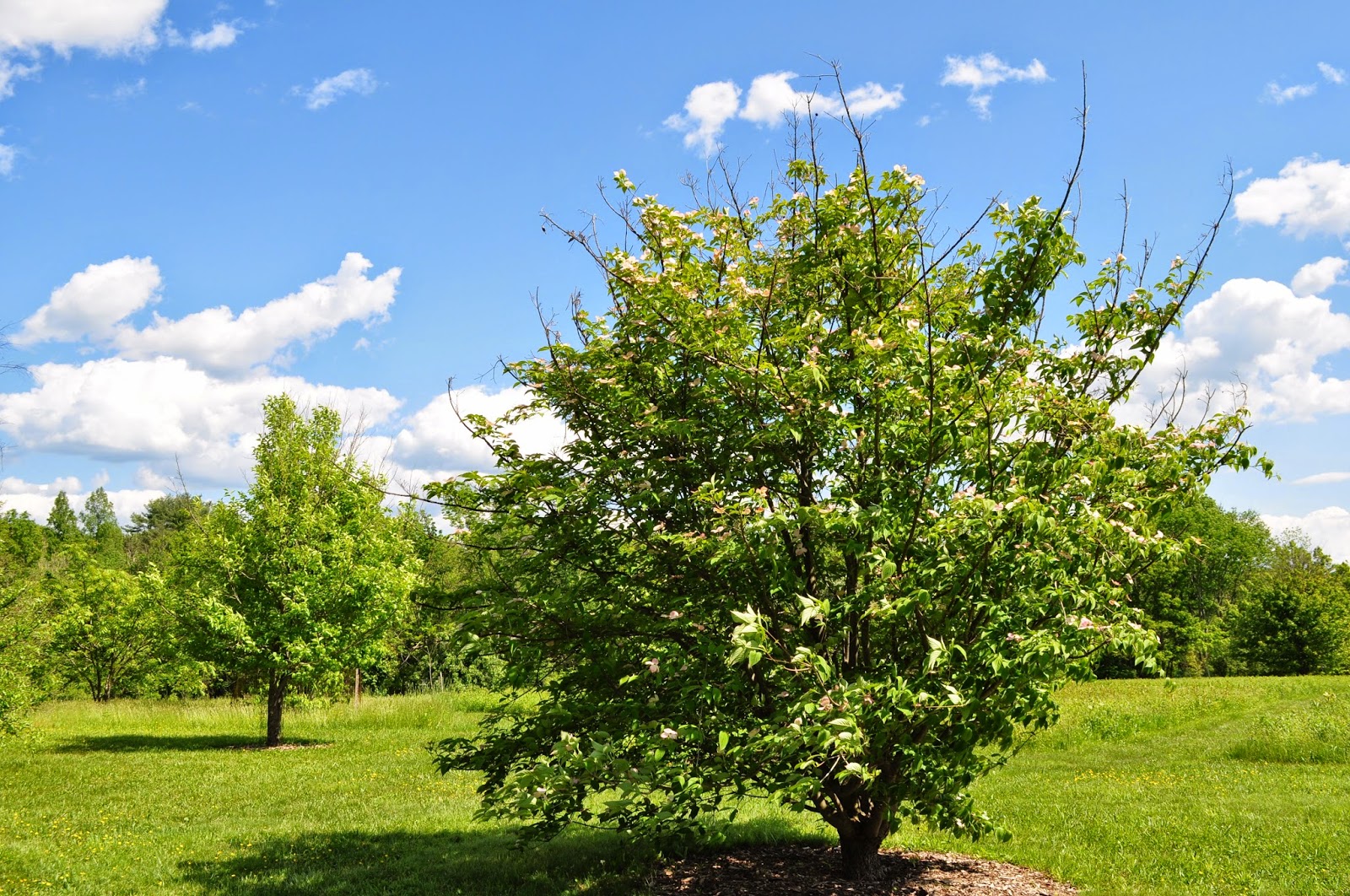 A new study predicts that, if we don't cut emissions, ozone will become much, much worse and people will become ill and die from it even more frequently.  It models the usual cheery prospect that humans might voluntarily reduce emissions of NOx and methane, which is never going to happen.  On the other hand, and again typically, their worse case scenario doesn't include the foregone conclusion that anthropogenic industrial emissions will go down as industrial civilization collapses...but hey, then again, as wildfires go unchecked, as desperate people burn trees for food and fuel, and more methane is released from melting, who knows how high ozone will go? 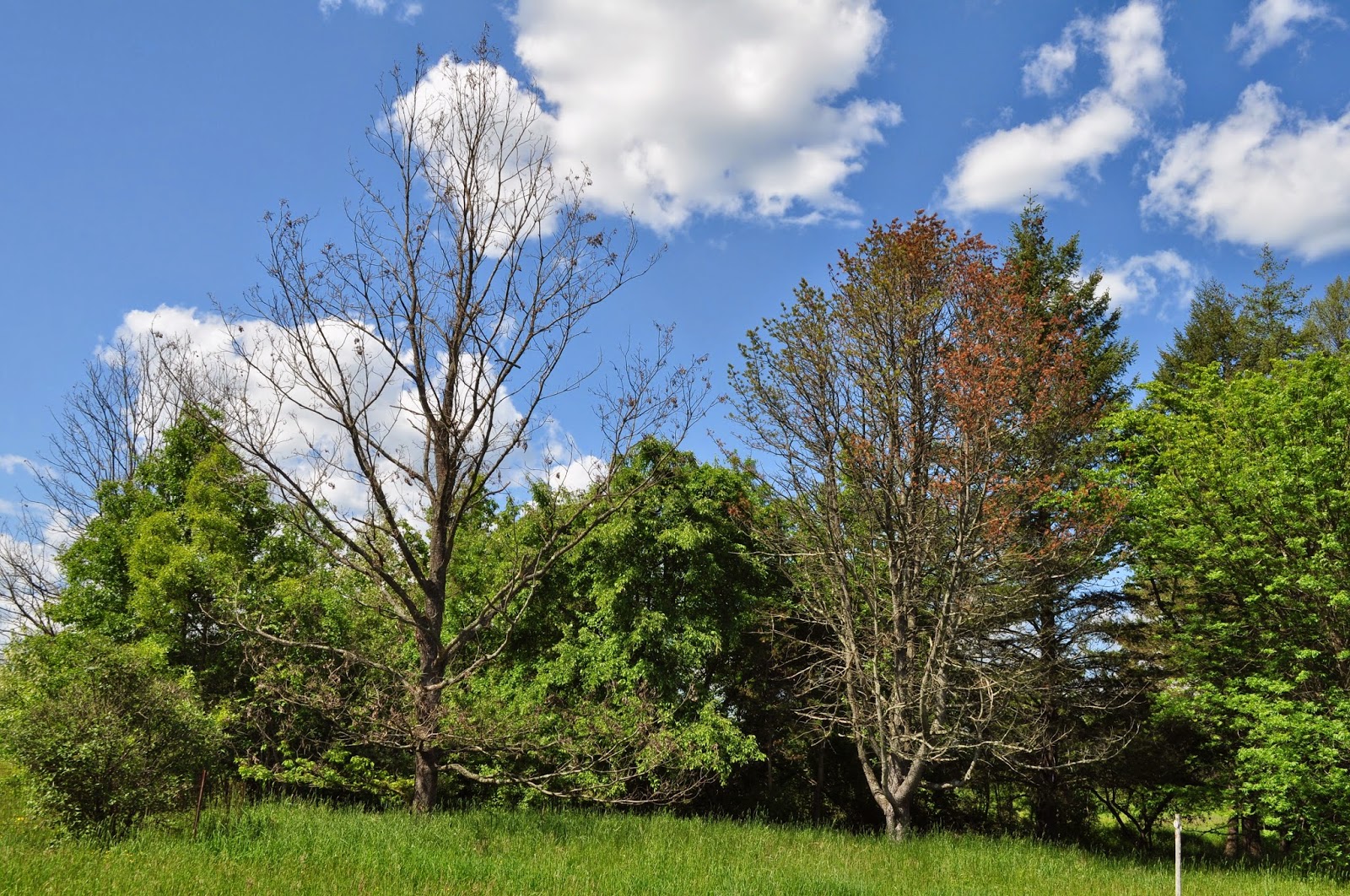 I do like this harrowing passage from the article though:


"Rising temperatures, and the attendant growth of short-lived greenhouse gases such as methane and oxides of nitrogen, could turn local atmospheres into a photochemical crucible that will spur a cascade of chemical reactions and lead to higher incidence of ground-level ozone." 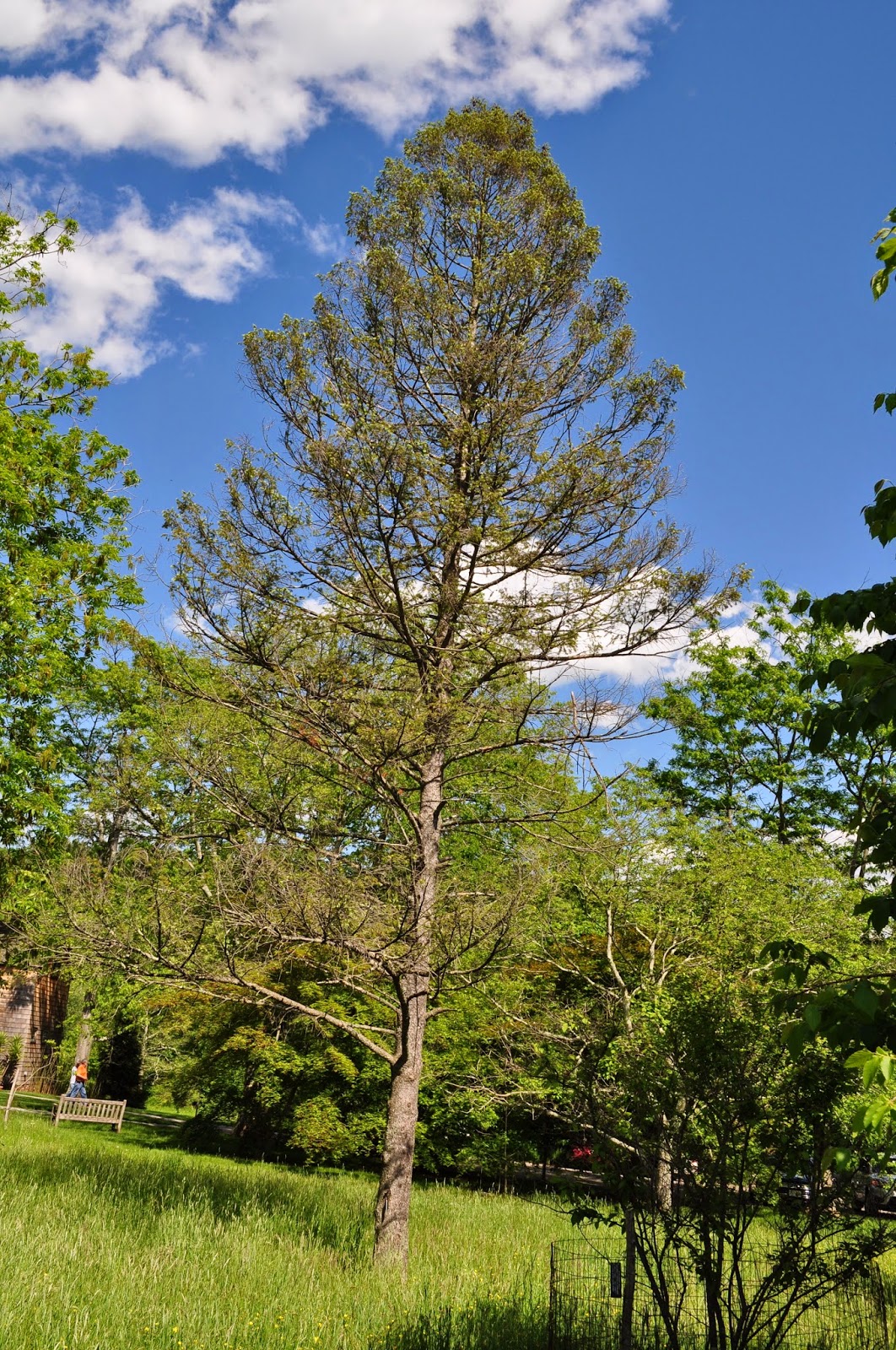 Even as pictures emerge of the turmoil in the Ukraine, the trees there look dreadful too...fancy that!
I predict there will be a new sport - Dodging falling trees while on the road!


There will be no lack of these videos in the future, although they were once unheard of - this tree was totally hollow and yet, incredibly, not one person during the long news segment mentioned this fact. 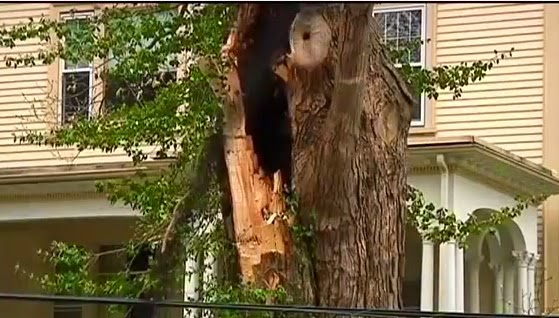 I think it is a form of collective insanity.

This documentary was made in 1989 by the recently deceased Canadian environmentalist, Farley Mowat, based on his earlier book.  It is utterly excruciating to watch.  Using amazing archival footage, he traces the massacre of life in and around the Atlantic Ocean over the last 500 years.  Difficult and depressing as it is to watch (I could only bear it in segments), it is an incredibly important, gripping saga of relentless human rapaciousness that is applicable to many other of our enterprises throughout history, and ongoing today.  It was produced in two parts that here run sequentially - and it isn't really 1:45...more like an hour and a half.  So get out the popcorn (although it may be impossible to eat it).