"The last sentence, 'Lawmakers today aren’t seeing the forest for the trees; that will change when the forest has burned or been destroyed by bark beetles, but by then it will be too late.' is sadly late.

Bark beetles have been expanding through our forests for years, but few acknowledged that the rapid expansion of affected areas were a symptom of global warming. Mountain Pine Beetle was a clear problem by the time I arrived in California in 1980."

When I saw that I thought, whoa! wait a minute!! If the beetle was already killing trees at an unnatural rate thirty years ago, it seems pretty obvious that it wasn't/isn't warming from climate change, but rather more likely, the high levels of ozone in the atmosphere weakening the trees and their ability to fend off insect attacks. Somewhere I once saw that before drastic steps were taken to clean auto exhaust in LA, women's nylon stockings melted on their legs from the toxins in the air.

Part of the discussion that inspired the comment is about the popular refusal among many, especially conservatives, to recognize the perils of climate change let alone take action to avert the consequences.

This morning there is an article in HuffPo about the deadly tornados in Oklahoma, and how people ignored the very explicit and accurate warnings that they were about to experience violent weather. As evidently, people can't even be bothered to seek shelter when they've been told multiple tornados are imminent, why is it any wonder they don't sacrifice immediate gratification to postpone the next generation's uninhabitable climate?!

Come to think of it, they often don't evacuate when told a volcano is about to erupt, or a hurricane is on the way, either. Of course, there's no way to evacuate Earth.

I guess we get what we deserve...

I'm not sure exactly how, but I landed on a extraordinarily fantastic website about art, Lines and Colors. In my all-consuming grief about our rapidly collapsing ecosystem, I had practically forgotten about art and how much I have always loved beautiful paintings. It's rainy today, so since I can't take pictures of dying trees, here instead are some from the website (the first, a charming portait by Pietro Antonio Ritari, is from a link to yet another site, Art Inconnu).

From Art Inconnu...and these below, from Lines and Colors 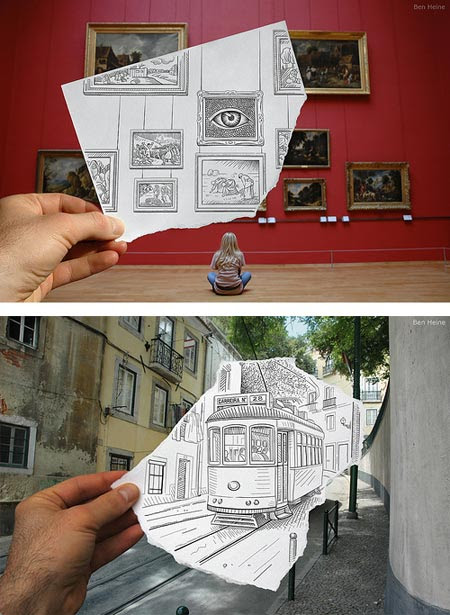 That artist, Ben Heine, draws part of a scene in pencil, and then photographs his drawing held in place. What a marvelous and unique idea! And these below by Ted Polomis are so lush, I could gaze at them all day and never tire of their depths.