All Begins to Wither

It was too blustery yesterday to stay on the beach, so I took Camus for a walk in a birdless bird sanctuary instead.  Well, nearly.  I saw three, and heard one.  Add to that one butterfly, one terrified armadillo and one insouciant deer, and that is the entire sum of wildlife we found.

The twisted live oaks and bristly palms have their odd Florida charm, so different than the environment I grew up in.  It's easier for me to observe the decay in this alien landscape than to be a witness under duress, amongst the hardwood species whose majesty inspired me from my earliest memories. 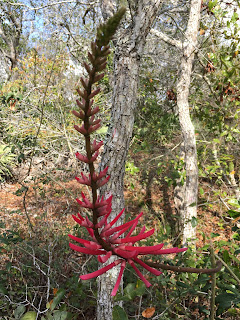 There were some vermilion wildflowers in bloom... 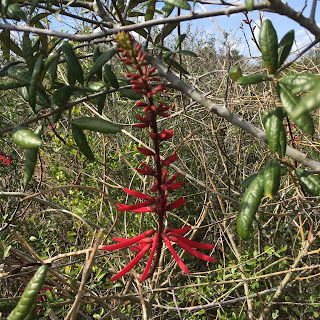 ...but, the same painfully thin crowns are here as they are everywhere. 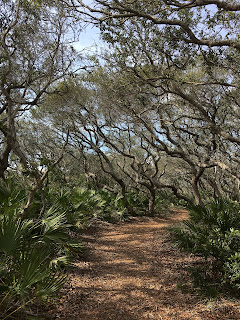 A surprising amount of sun reaches the woodland floor, and the ferns that should blanket the ground, according to a park nature guide, are vanishingly absent. 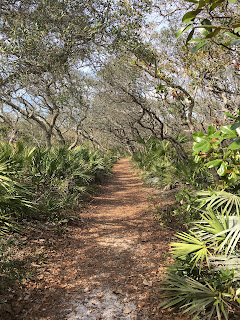 
Their fate will be what ultimately happens to the entire preserve. 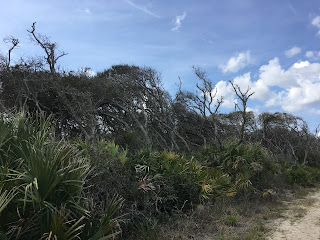 Stark skeletal remains are sentinels of the graveyard that is transforming what was once a vibrant ecosystem. 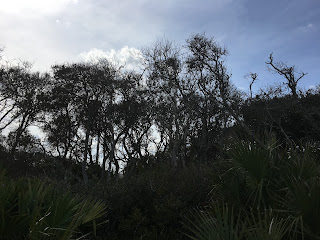 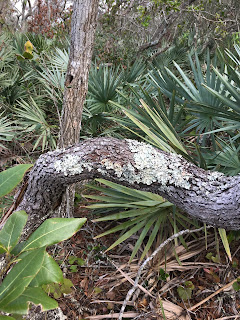 As if to assuage any qualms that might spook the hikers, the signs along the path declare "Nothing alarming to see here, all perfectly normal, move along!" 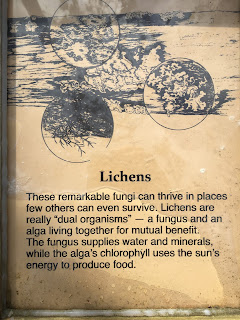 And yet there is no question that those branches that have crashed the ground are smothered. 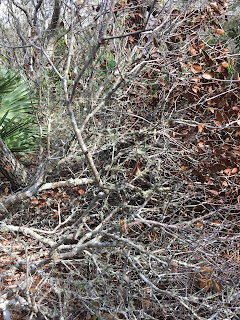 It amazes me that even as it has become impossible to deny the toxic effects of excess nitrogen pollution in Florida's water, in the rivers, canals, ponds, lakes and along the coasts, nobody seems to have noticed that the vegetation is also dying.  One article about the putrid algae blooms describes the problem: 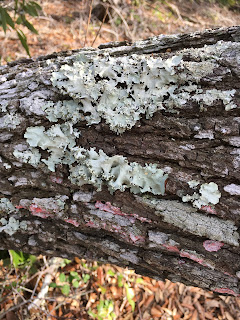 "Recent blooms of toxic algae in southern Florida, which have provoked Governor Rick Scott to announce a state of emergency, may be tied to fertilizer chemicals from agricultural and residential origins." 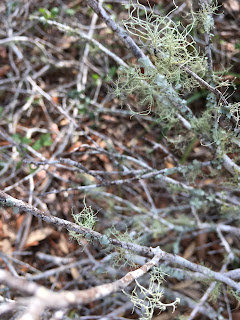 "Waterways and beaches along Florida’s Treasure Coast, Lake Okeechobee, and the Everglades have been experiencing massive blooms of toxic algae since May. The cyanobacteria algae—described as thick, pea-green, and foul-smelling—is intensely toxic and poses health risks to people and wildlife in the area. At its peak, the bloom in Lake Okeechobee covered 33 square miles—or about one-third of the lake's surface. One source estimates the total area of the algae to be roughly the size of Miami." 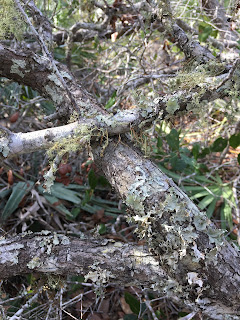 "The impact of these algae blooms has already proven disastrous. Tourism, a main source of income for residents around Lake Okeechobee and along the coast, is down. Contact with toxic algae blooms “can affect the gastrointestinal system, liver, nervous system, and skin.” Fish are dying, and many have raised concerns about manatees and other large wildlife in the area." 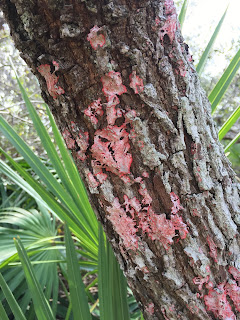 And yet, everyone is sleepwalking blindly past corroded, rotting trees and blistered foliage. 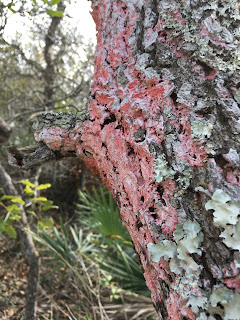 Is it any wonder that the Florida scrub is incendiary tinder just waiting to burn?

I came across an artist whose paintings I love - impressionistic visions of trees that remind me of how gorgeous they were, not that long ago.   (I would give anything to be able to paint that brilliantly, to be honest.) 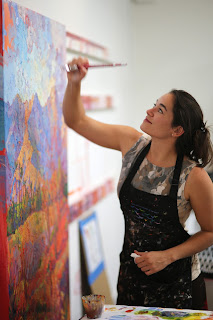 Her name is Erin Hanson, and her website is here.  Obviously, I'm not blogging much anymore, because it's far too late to stop the 6th mass extinction, which sooner or later is going to include trees, and us. 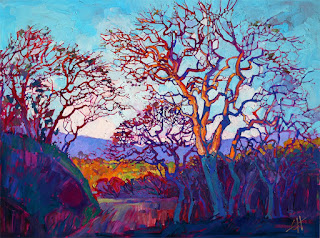 But when I see another story chronicling the increasing incidents of death by tree, I feel obliged to document it.  The CDC does not.  Nobody else does either, as best I can determine.  Falling branches and broken trunks are simply becoming normalized, and the overall trend is ignored. 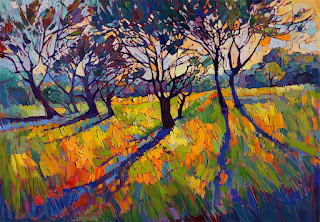 A 21 year old woman was killed by a falling tree in Yosemite Park yesterday.  So far, the victim has not been named.  But I can't help thinking that she has a family and friends who loved her, and are in shock and will be for a long time. 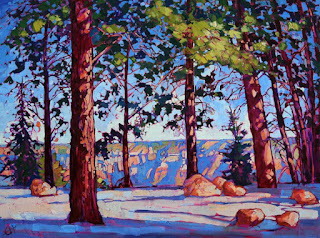 According to one article about the incident, she is the third person to die in California already this year: 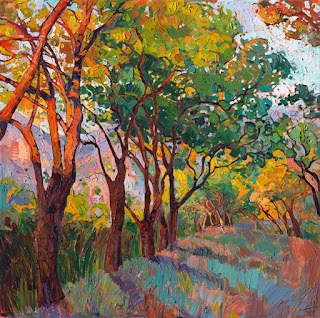 "In December and January, at least two people in California were killed by falling trees. In January, one woman who struck and killed by a tree while walking on a Northern California golf course. In December, a woman posing for photographs as part of a wedding party was killed and five others were injured by a falling eucalyptus tree in Southern California." 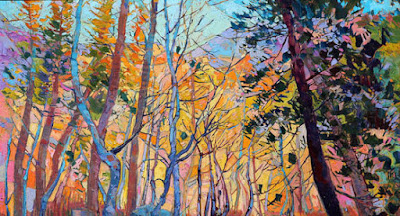 It turns out that 2013 the camp counselor who was killed in the same park, was the same age of 21: 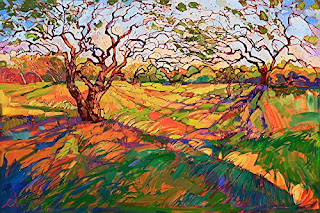 "The sudden toppling of a black oak tree at a summer camp outside Yosemite National Park last week was a "freak accident," said Jamie Simon, director of Camp Tawonga. 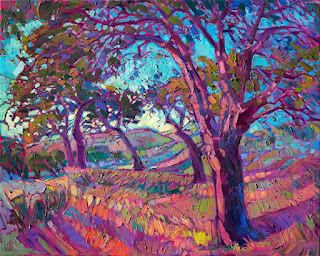 "The giant tree fell near a building, killing 21-year-old camp counselor Annais Rittenberg and injuring others." 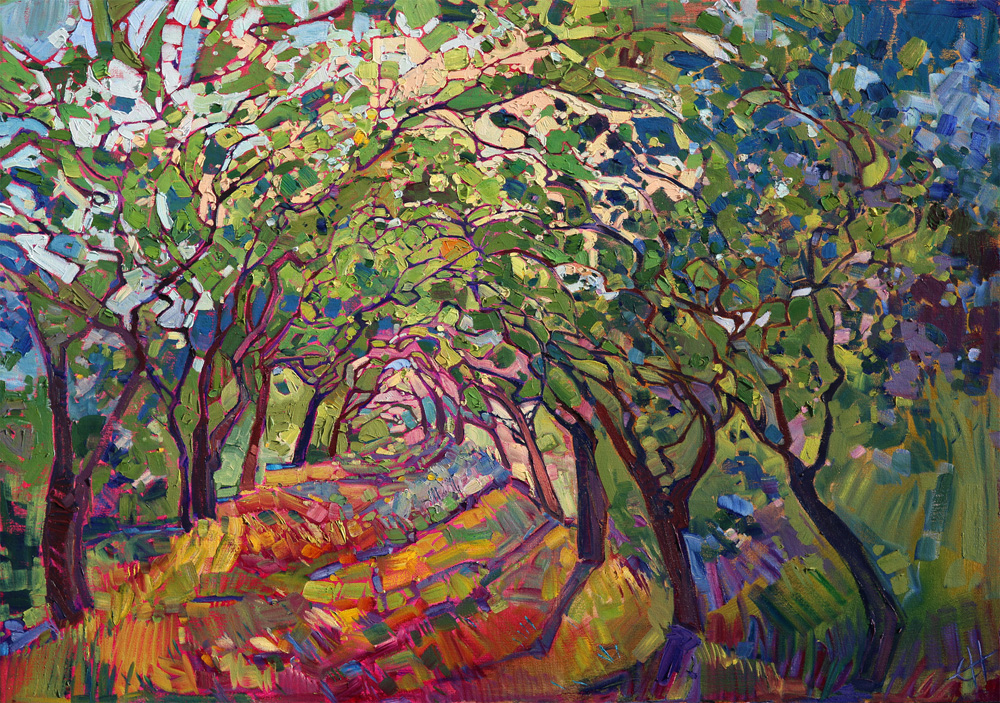 "A private arborist checks the trees at the camp every 12 to 18 months, Simon said. The same arborist returned after the accident and, after inspecting the fallen tree, "deemed the tree healthy," she said." 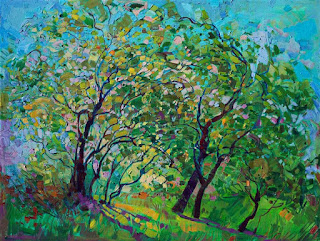 "The tree was described by Tuolumne County Sheriff's officials as a black oak tree that measured nearly 4.5 feet across and about 70 feet tall. It broke in half about 32 feet off the ground, Sgt. James Oliver said." 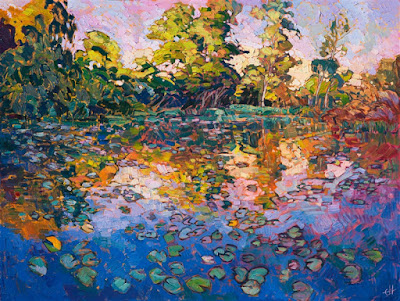 This reluctant post is dedicated to the trees that are dying, and the people whose lives are ruined because of it.