I had a fellow who sells firewood over last weekend, to look at the trees around Wit's End. Since I know for sure they are going to fall over, and the only question is when, I'm trying to find someone who wants to fell them and cart them off before they land on the house, car or me. "Which ones do you want taken down?" he asked. I pointed to a large black walnut with tufts of foliage only at the tips of its branches. "But it still has leaves!" he exclaimed. Well, your Christmas tree may have needles but it sure is dead anyway! 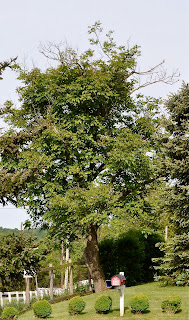 One of the first things I learned about trees when I first noticed their leaves were wilted is that by the time their crowns are thin, needles are yellow or falling off, the tree is already dying. It is irreversible and unsalvageable. This pine fell over sometime between yesterday afternoon and this morning. It just keeled over, because its roots are rotted and there's nothing holding it up. Sooner or later all the trees will do the same, if we don't have a huge forest fire first. 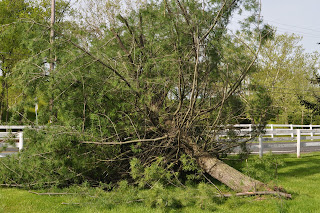