The Dusk of the Locust

In an earlier post I mentioned that it is time for a requiem for the lovely, gentle, delightful sycamore. Other species of trees, I am afraid, are fast on its heels. 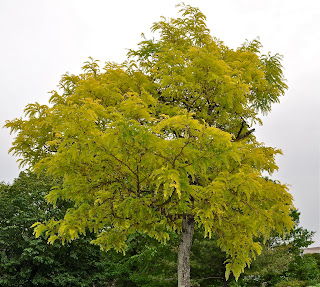 Honey locust are blooming at the moment - I haven't had a chance to take a picture of them. I never realized how many other varieties of locust exist before, but it turns out, they are a very popular tree for landscapers. This spring it has become evident because they are the most extreme and bizarre yellow. Their acid hue sticks out, ubiquitous and unpleasant, from every shopping mall and roadway. 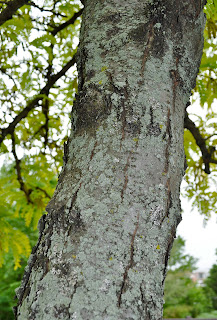 This is a typical trunk, with BALDing syndrome (Bark Atrophy Lichen Decay). The outer layer is splitting, which invites in all sorts of predatory insects, diseases, and fungus. 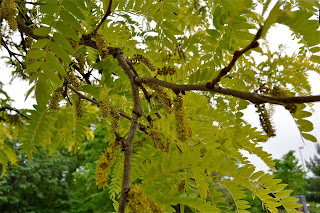 They really look quite repulsive...in that earlier post about the sycamore, I mentioned that the early new growth of spring was shriveling. This is now to be observed in other species as well. Not quite as universal as the doomed sycamore, but extremely disturbing nonetheless, as it is a spreading and accelerating trend. 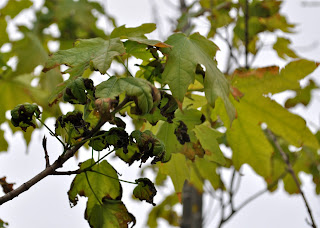 These maple leaves are also, having just leaved out, exhibiting signs of severe damage. 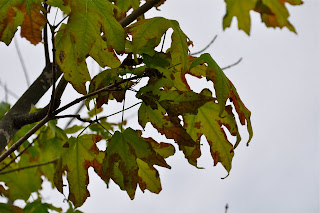 This is far worse than last year, when it wasn't until mid-summer that leaves looked so wounded. 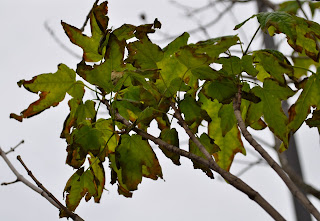 And another jarring trend is for leaves to actually be physically torn up. Yesterday I looked at tulip poplar and oak leaves landing on the ground and they were shredded, and today, on this linden tree, the same sort of thrashing is evident. I have no idea why. You would think they had been assaulted by hail, but there's been nothing but rain! 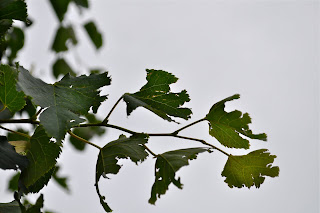 Here is an article written by Michael Baillie, about the use and misuse of his tree ring data from Irish oaks, to reconstruct past climate.

This is all part of the controversy over the canard about "hiding the decline" and debating the legitimacy of demands for raw data - all a bit peripheral to the purpose of this blog, which is to ascertain the cause of tree decline, and halt it.
Nevertheless there was a portion of this article that is arresting, when Dr. Baillie states:

"...as a scientist reviewing the issue from an evolutionary perspective, if humans are even partly the cause of the warming since 1990 then we are already doomed as a species."

This terrifying pronouncement is perfectly in keeping with my very unscientific but I think, logical deduction - which is if you alter any fundamental component of the environment, massively and rapidly, the inevitable and totally unsurprising result will be mass extinctions. There's just no other way for the inconceivable complexity of species evolved over tens of millions of years to react.
So, I salute Dr. Baillie for sneaking that trenchant observation into a mainstream media outlet.
Posted by Gail Zawacki at 7:16 PM