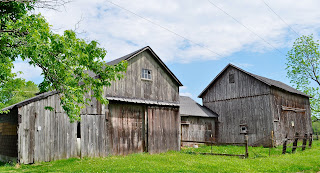 Turning around a sharp bend on a little country road, I came across this neglected barn. Across the lane was an old graveyard. 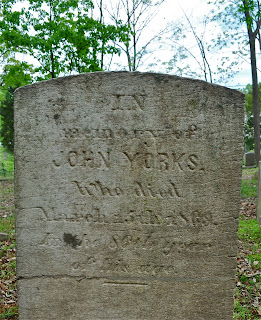 Some of the headstones were so old I couldn't read them at all, and many were just tiny square markers for children. The oldest I could make out was 1809. 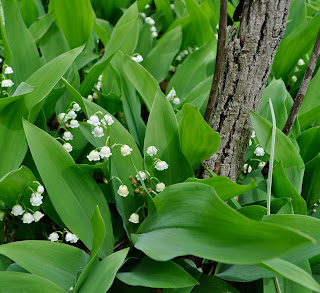 When I was young my friends used to congregate at the local cemetery in Ipswich, which was very ancient, going back to the 1600's. There is a nice one in Oldwick too, a village that was settled in the 18th century. My forebears came from all the world over and scattered. I often thought when going past an old resting place like this how nice it would be to have a burial ground with one's own ancestors close by, and have some sense of familial continuity. 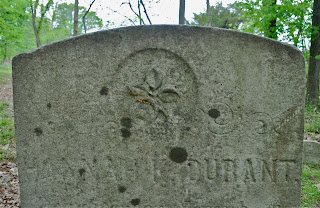 Rosalind Peterson has been an environmental activist for years in California. She considers a range of possible sources that impact trees in this article at the Agricultural Defense website. Interesting that it is from 2007 and she was already sounding the alarm about the decline in bees and other pollinators, which has lately become dramatic enough to finally make the news. 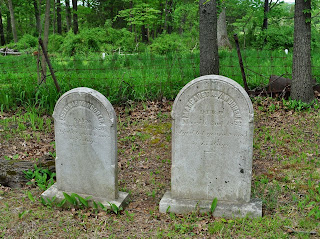 Let’s remember what Albert Einstein once said: “Should the honey bee ever disappear, mankind would only survive a few years beyond it." from a beekeeper 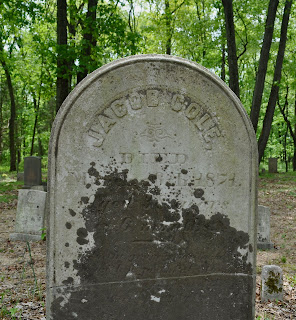 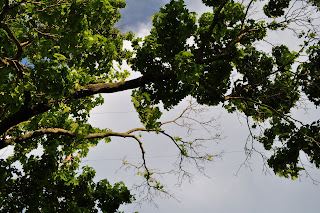 Every day, more peculiar sights appear. This pin oak still has brown leaves from last year, intermingled with the new leaves of this spring. 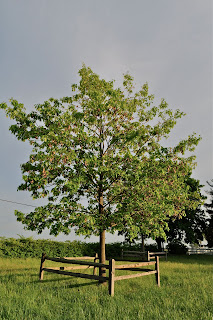 The tree did not have enough vigor to shed the old foliage. 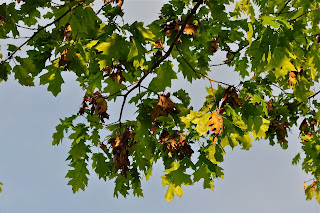 It is an odd coincidence that the sycamores have the same appearance but for a different reason. I grieves me to report that the sycamore is the first tree species that I have witnessed to go functionally extinct. Others will soon follow of course. 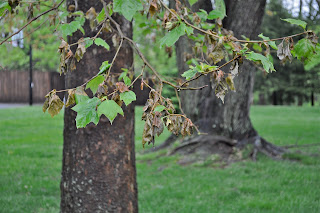 The sycamores, like the dogwoods which disappeared already, have been struggling for a decade or two with anthracnose, a fungus that causes many of their leaves to drop by July. For the last 10 years, the sycamores have rallied mid-summer and put out another batch of leaves, smaller than the first...and thus they limped along until this year, 2010, the year they have given up.
They were late to leaf out and before they even finished, the leaves abruptly turned brown and shriveled up. 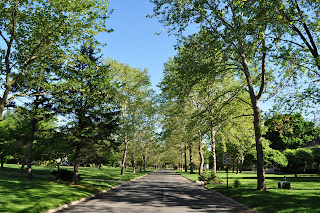 This entire street is lined with sycamore, all with the identical leaf loss. Every specimen whether on a lawn or in the woods has done the same thing. I won't say anything more about this because other than copper beech, sycamores have always been my favorite tree, with their beautiful, mottled, creamy bark that reflects the colors of the sky at sunset. I will have more photographs on another post...it is too awful to dwell on it today.
Update: Here is the link to a longer sycamore post. 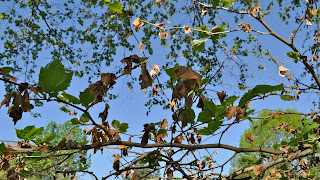 Much other foliage has peculiar colors - look at this lotus leaf that should be green! 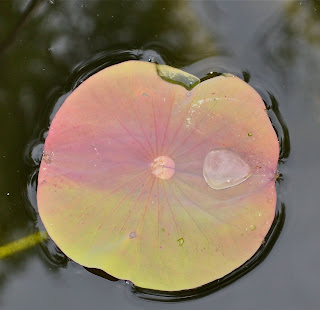 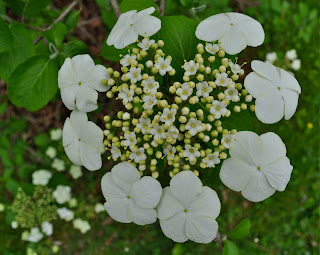 They are a relief to see. 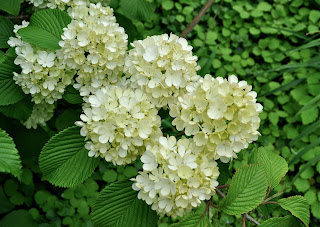 In the EPA report below - from 1999! - it reiterates that plants weakened by exposure to ozone are attacked by insects. These aphids are dangerous to plants. Last summer, apple trees, the copper beech, and catalpas were all carpeted with aphids. 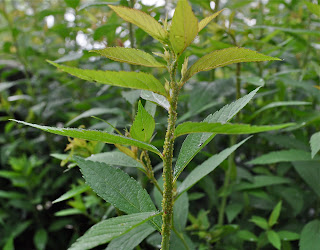 I have continued my futile pursuit to photograph birds. They are so quick! And when they are high in the treetops, my lens is not powerful enough. I was so frustrated that I couldn't get a good shot of this Baltimore Oriole. What a brilliant color! 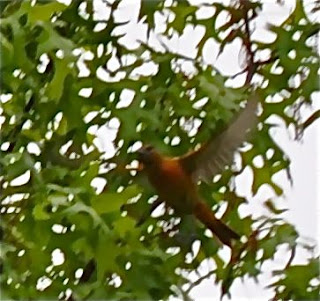 I found a report at this website which reveals that even in 1999 the EPA was well aware that ozone damages crops and trees, and leads to worse impacts from insects and disease - and has since done nothing significant to halt its inexorably rising concentrations in the tropospheric atmosphere. I highlighted the section about ozone impacts on vegetation in red, below. The entire forestry industry of England is all worked up about trees dying from mysterious bacteria - why do professionals ignore the obvious?
It's just incredible to me that our scientists and government agencies know how lethal the chemicals are that we are spewing into our air and water and yet do nothing but publish reports and request money for more research.

Ultimately, EPA's principal concern in evaluating and controlling (jet fuel) emissions is the preservation of human health and, secondarily, the protection of public welfare (including protection against damage to crops, vegetation, animals, and buildings)...In particular, they have significant concerns regarding the effect of NOx on local and regional environments. Tropospheric NOx has multiple environmental quality impacts…contributing to ground-level O3 and PM, but also air toxic concentrations, excess nitrogen loads to sensitive water bodies, and acidification of sensitive ecosystems (EPA 1997a)." (PM = Particulate Matter).