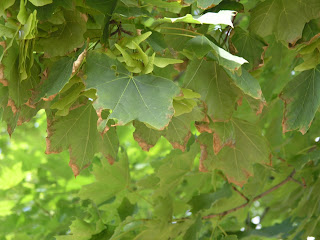 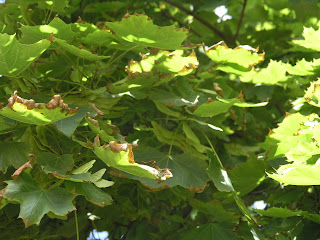 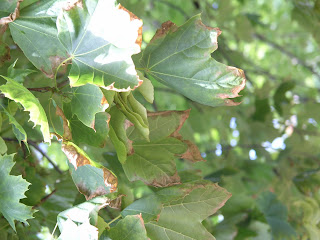 "Leaf wilt and leaf scorch are not the same thing.

Scorch has been described as milder than wilt in scope, and the result of a progressive restriction on the vascular system, meaning it is more chronic than acute in nature. Leaves suffering from scorch do not become flaccid before turning necrotic.

Wilt is characterized by leaf drooping, followed by chlorosis, necrosis, and abscission. It is typically caused by a major disruption to the main translocation system of the roots, stems, and petioles caused by relatively sudden (acute) agents like drought or vascular disease."

Clorosis (from Wiki): "in botany, chlorosis is a condition in which leaves produce insufficient chlorophyll. As chlorophyll is responsible for the green colour of leaves, chlorotic leaves are pale, yellow, or yellow-white. The affected plant has little or no ability to manufacture carbohydrates through photosynthesis and may die unless the cause of its chlorophyll insufficiency is treated"; and by

Necrosis, (from Wiki): "the name given to premature death of cells and living tissue."; and by

Abscission: "Premature senescence and shedding of leaves can be induced by drought. The loss of leaves during drought can involve either true abscission, or leaves may wither and die." (from http://www.snca.org/enviro/trees/pdfs2/droughtdamage.pdf))

And then, at this site I found more information, all of which corresponds with the landscape from late last summer till now, up and down the Eastern Seaboard, with an uncanny and terrifying precision:

1) In a single year, moisture stress symptoms may not appear until late in the summer after extensive hot and dry windy weather.

2) Extended drought stress (more than one season) can result in crown decline, twig die back, small branch die back in the upper crown and progressively larger branches can succumb or are vulnerable to breakout under strong wind conditions. Suckering may occur on the trunk and upper branches of heavily stressed trees, cambium death and cankers may also occur resulting in the girdling of the tree and total tree death. Often cankers may be the direct result of moisture stress or may occur with the development of disease which produce cankers while the tree is severely stressed and susceptible. Another symptom of extended drought stress is heavy seed loads the year following the drought.

3) Often the symptoms of drought stress are delayed. Water deficiency may cause extensive root injury in the late summer and fall. The current year's foliage may not reveal any symptoms. Conifers are an example of a plant that by the time it expresses symptoms of stress the plant is already in dangerously poor health. In sum, the symptoms and effects of the drought may not appear until the following year when rainfall is normal.

Unabscised dead leaves remaining on the tree: Oaks and other deciduous trees may show complete browning of foliage and the foliage remains attached. If the leaf loss occurs too rapidly for the abscission layer to form, the tree will remain in full leaf but brown."
Posted by Gail Zawacki at 1:06 PM