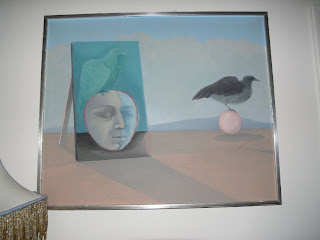 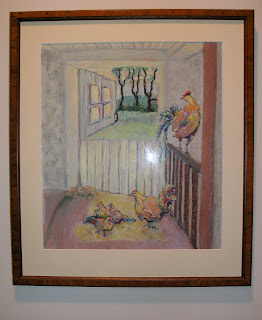 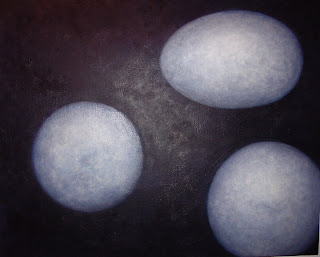 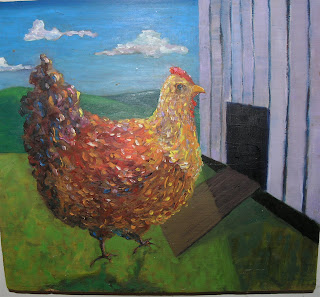 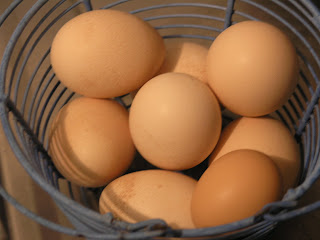 I have always been fascinated with eggs, particularly chicken eggs. I have painted them, cooked them, collected them, dyed and decorated them with ribbon and sequins, and thought about them, quite a bit. One of these days I will compile a comprehensive list of all the common references to them that people largely don't realize refer to chickens and roosters and their peculiarities (who's ruling the roost? ruffling their feathers? don't count your eggs until they're hatched...an endless mine). All you need to know about humans you can learn from keeping poultry.

I digress. I meant to write about something related, which is that one of the most enduring influences in my life is Judith Fouser. This goes back a long time, and we haven't had any contact since I was a young woman. Just another example of the meaning of "formative years." Judith was, probably still is, an artist and she needed help with childcare so she could have time to pursue her painting.

So, when I was a teenager I babysat for her first son, Joshua the original Wild Thing with white-gold curls and mischievous eyes. Being part of that family afforded me a glimpse into a very different world than I was familiar with, an exotic and exciting and exceedingly intriguing prospect. They lived in a charmingly well-preserved federal home on the hill overlooking the historic Ipswich Green, with geese in the back yard and a plaster statue of a bodacious naked figure on the landing, a sort of relic from her days at art school. On hot summer days, when the front door was open to the breeze, this lifelike specter with beseeching, outstretched hands and lovely breasts, gave passersby quite a surprise.

Judith tended towards lyrical, smooth and rounded shaped figures frozen on austere landscapes, all in subdued hues. She also scoured the beaches for battered shells to make collages, and to use as erotic subjects in her paintings - reminiscent of Georgia O'Keeffe but mostly in shades of grey. Much more New England than New Mexico. Every day in the summer we would drive to the beach in her battered VW bug, and I would make sure Joshua didn't drown while lurching and hurtling in the surf while she read books in the shade of her gigantic floppy straw hat, with her thermos of martinis planted firmly in the sand by her canvas folding chair.

One of the reasons knowing the Fouser family was so extraordinary was because Judith was an early acolyte of Julia Child's first French cookbook. In these days, post Chez Panisse and so many others, it's hard to imagine how unusual and exciting that was. I grew up with a mother who was an excellent cook but was restricted to only the most basic of ingredients in combinations no more various than those that spanned at least two generations. From her garden she made sauerkraut, and pickles - and a favorite dish involved white rice, pieces of chicken, canned pineapple, Campbell's mushroom soup with a tiny scoop of instant coffee stirred in, all baked and topped with grated cheese. Actually it wasn't bad...

On the other hand, Judith used actual fresh mushrooms, practically unheard of - and wine, and garlic, and HERBS. It was just a revelation to nibble on the leftovers of her dinner parties the next day.

Of course, our lunch staple was still sandwiches, made from Pepperidge Farm white bread, mayonnaise, and slabs of Land 'O' Lakes block cheese or perhaps instead, cucumbers!

The Fouser's were members of an elite and daring coterie that most notably included John Updike, and it was an irreverant reference to them, whilst jumbling up the couples, their personal quirks and escapades, with which he composed "Tarbox," a novel that caused quite a sensation when it was published, for the unabashed adulteries. I can remember accidentally stumbling across mixed pairs in the lilacs behind the tennis court, and, after supper, watching the entire group strip and skinny dip in a pond. Naturally this became what I expected normal adulthood to entail, so consequently I couldn't wait to grow up, and when I actually did, I wondered wistfully more than once when the party was going to begin.

Anyway, I still am enamored of cooking delicious food, and raising chickens, and pondering eggs with all their simplicity and mystery.

At the top of the post is a painting of Judith's that I have had for about thirty years. It hangs on the wall next to my bed so it is the first thing I see when I wake up, and it still fascinates me. It seems to be about consciousness, awareness, and birth, and secrecy, and fear, and a whole bunch of other things, depending on the light and my mood. Also some pictures of mine - of chickens, and eggs. And some real eggs. The egg on the lower right is normal grocery-store size. The others are twins!
Posted by Gail Zawacki at 9:09 PM