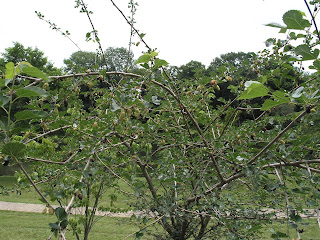 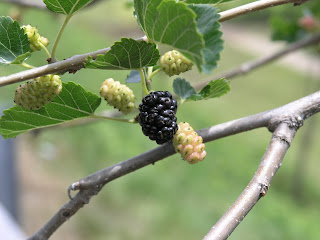 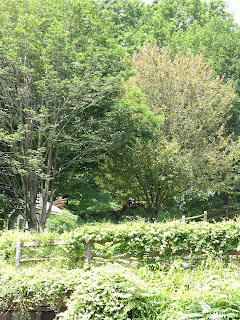 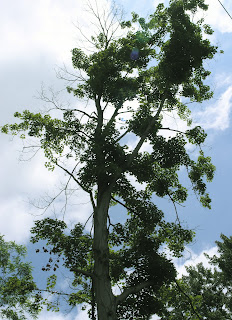 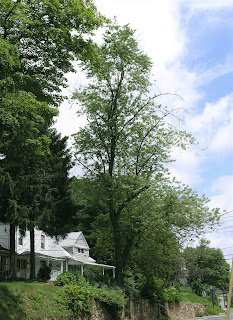 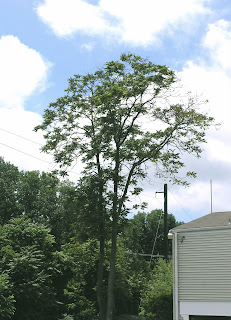 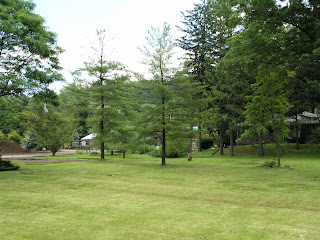 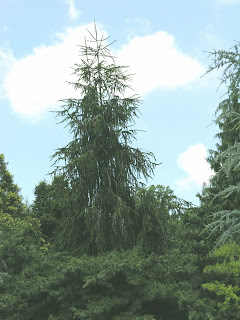 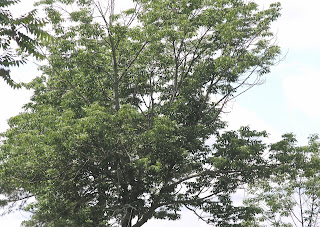 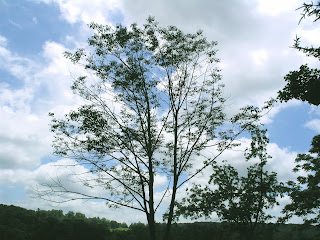 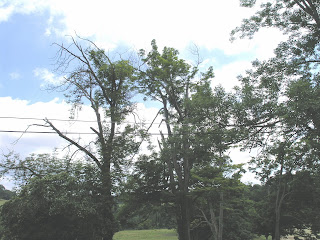 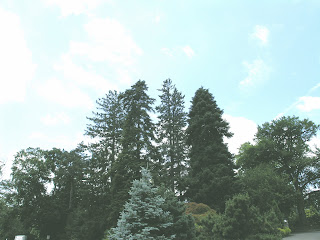 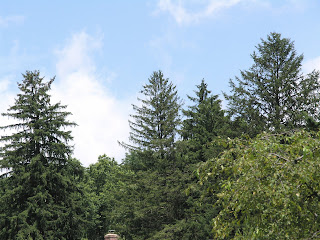 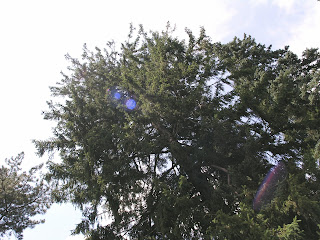 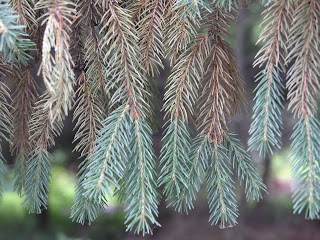 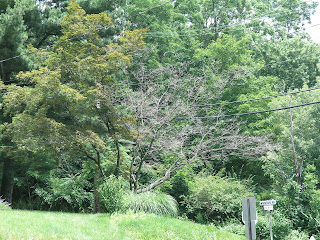 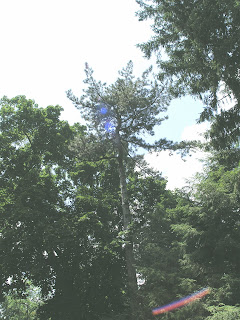 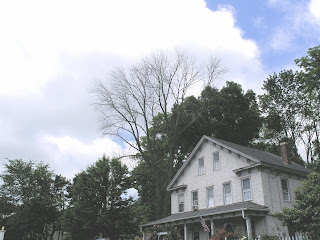 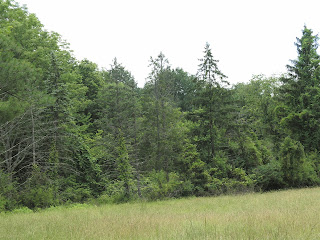 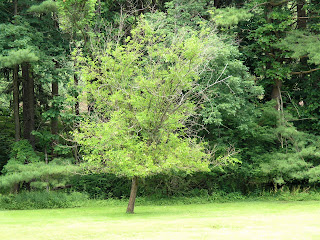 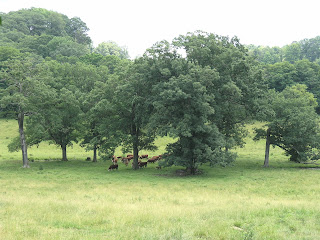 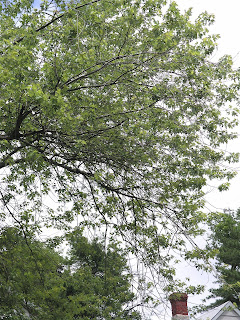 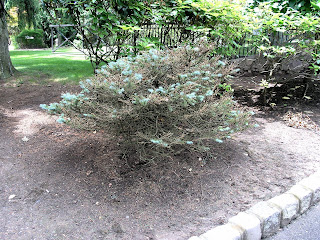 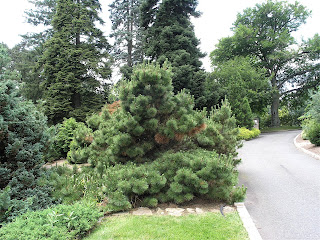 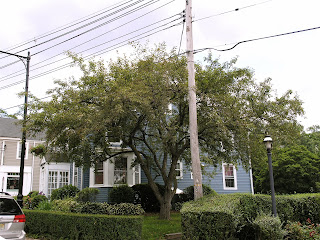 In a mix of sun and clouds I drove to Bernardsville yesterday, and stopped every few minutes along Route 202 on the way to take pictures of the trees along the road. All of these dying trees are within a mile of each other, and certainly, there are others.

It's insane that all these beautiful trees are dying in front of our eyes and people just drive by, utterly clueless.

Regarding the timing of ripe mulberries, I found this tree close to the center of town. Look at how absurdly small the leaves are, compared to the berry, which is actually a rather tiny (but delicious) fruit.

This is another example, like pine cones, of desperate trees putting all their energy into reproduction.

I'm thinking, we should build biodomes, and grow bonsai versions of today's trees so we can eventually replant them, assuming we don't unleash such runaway warming that nothing can survive.

I'm also thinking, the best way for any of us humans to survive is to band together as small communities that can farm together. And this morning I discovered a link sent to me via Climate Progress, to this:

Which is exactly what I have been seeking! This made me feel almost buoyant with happiness. I can't wait to investigate further.

Yesterday I wrote to a professor whose profile is here:

http://www.nd.edu/~lumen/2007_04/Butterfliesandthebiologyofclimatechange.shtml and I'll be very interested in any response I may get, since she seems to have a realistic approach - although of course, I'm sure she would rather her research show species will migrate when they can't adapt (because who wouldn't wish for that) but it doesn't.

Here's the article about her paper that led me to write:

So often, scientists have a very narrow focus - which is the correct way to do science. I admire them for the temerity it takes to drill and read hundreds or thousands of ice cores or tree rings, or count pollen buried under the sea. But I haven't really been able to find anyone who is studying the decline of Eastern Forests - I wish I could find someone! Because usually someone studying, say, butterflies, isn't particularly interested in trees - even though without them, the butterflies won't survive either.

There are plenty of scientists doing research on trees out west and some in the boreal forest of Canada, but few if any here.

It seems to me that she is overly optimistic about transferring insects or anything else, because that assumes a linear, gradual, even increase in temperatures. But that is not how climate chaos is going to work! It is going to entail wild swings in temperatures, and precipitation, in fact it already is. Also it is ignoring the complex interconnectedness of an ecosystem. In other words, how are you going to move mushrooms that have a symbiotic relationship with trees? Most of them we cannot even figure out how to grow in a greenhouse, although we'd love to market the most edible of them, like truffles and morels - because their requirements are such a mystery.

So the idea of just moving species northward or upward is what I call unnatural exuberance.

I would be thrilled to hear from anyone who has good reason to think this is not true. 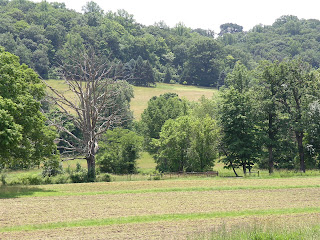 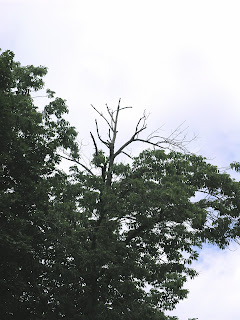 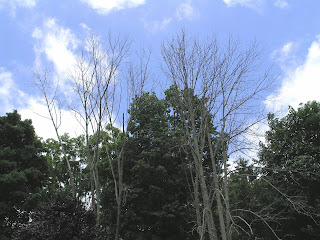 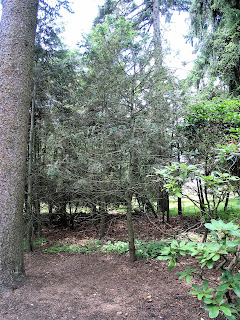