I know everyone has seen more than enough - but this one is special.  Even if you don't speak Japanese, the voices capture in exquisite calibration the disbelief and shock that something so horrible could happen so unexpectedly and swiftly...even though it has happened before and was predicted to certainly occur again.  Which of course is exactly the way that violent weather extremes from climate change, like tornados and floods and hurricanes...and famine from ecosystem collapse...are going to surprise - indeed, in many places already are - astonishing the victims who should'a, could'a, been prepared, because we've been WARNED, but have chosen to ignore the inescapable outcome of our heedless, reckless excesses.  Never mind... the main reason I have posted this video is in the screenshot below.

Because of course, I am preoccupied with trees, and as I neared the wild crescendo of panic in the movie, this lichen-loaded branch was prominent in the foreground.  It looks identical to the lichen that is flourishing half a world away, and likely loves nitrogen, and is a warning that trees are dying from pollution across the globe.  More on that later! 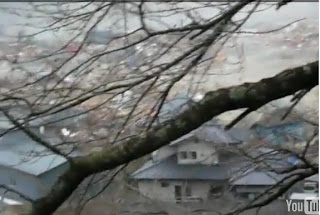