In some irreplaceably important ways I was beyond lucky, growing up.  "Us kids" were brought up with exactly no religion (no regrets there) but, we had a mother who was immersed in classical music - and a father who had amassed an all-encompassing assortment of jazz LPs, starting from the time he was an urchin growing up impoverished in Patterson slums.  As a kid, he rode the subway to Harlem and sneaked into the clubs - much later as an adult university professor, he continued to embellish his collection.

I grew up in an elongated house in Ipswich, Massachusetts - the original section built in 1720, which was then added to a century later.  The newer (1830's) kitchen end resonated as dinner was prepared, with elegant Chopin or invigorating, delicate Vivaldi...while at the same time the pre-colonial Cape end was shaking with loud earthy reverberations from Charlie Parker to Stan Getz, Dave Brubeck and Charles Mingus...from wild Cab Calloway to sad laments from Billie Holiday.

It was an entrancing and inspiring journey to travel from one end to the other of my parents'
universe.  Somehow they managed to occasionally meet in the middle - and I can recall sitting on the sofa in an entranced state of sublime pleasure, watching the two of them dance around the living room to the lilting croons of Frank Sinatra...and molten duets parried by Louis Armstrong and Ella Fitzgerald.

I was reminded of all this by a post at Decline of the Empire, linking to a song etched into my DNA, because I rarely seek out music anymore - it is too much a bittersweet reminder for me to think that so many gorgeous compositions are fated to go down just as extinct as the rest of the achievements of human race...at the rate we're going.  Along with bird songs, and frog songs.  And art, and literature.  GAH. What a travesty, what a waste.

If you want to know WHY I think that, you'll have to go up on the page and click on Basic Premise...or else scroll down...or just noodle around in the archives, because I'm too busy to elaborate (again).  The information is there - I expect the world will catch up quite soon as it becomes obvious the ecosystem is collapsing.  In other words, Rachel Carson had it right.

Whatever...the main reason I can't be bothered to explain it right now is because I am swamped with first daughter's wedding preparations.  I love her beyond any conceivable expression, and I just want her to be happy, so I volunteered to decoupage all these coasters with botanical prints for party favors!  What else is there? Yikes! 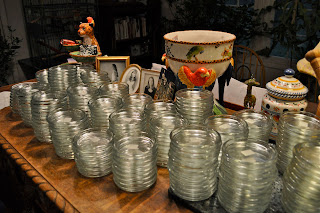 Here's the great clip I saw at DOTE  which instigated this post.  Note the lack of histrionics as the musicians simply make music.  I don't know what they are thinking of, but they're not plotting Lady Gaga marketing strategies.  Which may be a rather profound reflection on quite a few aspects of our modern condition.