The NYTimes posted a slideshow of various disasters.  There were destructive tornados over the weekend in Wisconsin - but this tree sure looks predisposed to fall - it is rotten on the inside... 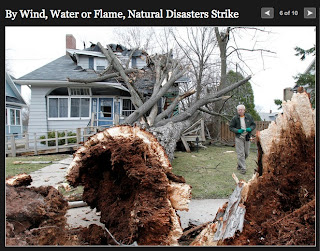 ...and the cedar to the left of this house is abnormally thin. 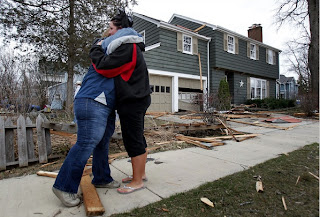 There is a story in Alternet, written by photographer Nina Berman, about the effects of fracking in rural Pennsylvania.  Just as DOTE admonishes every day, America is turning into a third world country - a place where energy companies can do whatever they want to extract fuel, no matter what collateral damage is done.  It would be incredible if it wasn't so obvious and predictable.  Following are a couple of examples from the article: 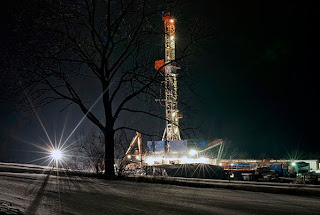 The Spencers' house, once valued at $150,000, is now worth $29,000. They have a methane monitor in their basement, a methane water filtration system in a backyard shed. They leave the door open when they take showers because with no bathroom windows they are afraid the house could blow up. Their neighbors were forced to evacuate once already because of high methane levels. In the middle of their yard, a shaft resembling a shrunken flagpole vents gas from their wellhead.

Pennsylvania's Governor Tom Corbett, and most of the state's politicians have embraced gas drilling and the tandem practice of fracking as a terrific boost for the economy and a "clean" alternative to foreign oil. Water well contamination, spills, truck diesel emissions, migrating methane, and radioactivity waste leaked into rivers, have generally been dismissed as minor concerns or isolated problems. There is pressure to keep the picture positive despite more than 750 violations issued by DEP last year alone.
Photos from Nina Berman's blog
Posted by Gail Zawacki at 8:35 AM