The Mail Online reports that Tokyo Electric Power Company Managing Director Akio Komiri broke down as he left a news conference after Japan officials raised the level of the nuclear crisis to acknowledge the incident will cause deaths. 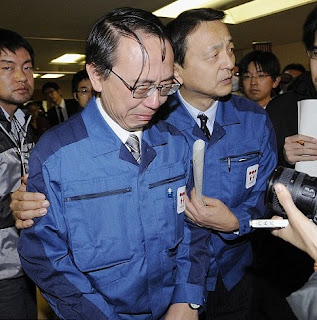 "The boss of the company behind the devastated Japanese nuclear reactor today broke down in tears - as his country finally acknowledged the radiation spewing from the over-heating reactors and fuel rods was enough to kill some citizens.


Japan's Nuclear and Industrial Safety Agency admitted that the disaster was a level 5, which is classified as a crisis causing 'several radiation deaths' by the UN International Atomic Energy.
Officials said the rating was raised after they realised the full extent of the radiation leaking from the plant. They also said that 3 per cent of the fuel in three of the reactors at the Fukushima plant had been severely damaged, suggesting those reactor cores have partially melted down.
After Tokyo Electric Power Company Managing Director Akio Komiri cried as he left a conference to brief journalists on the situation at Fukushima, a senior Japanese minister also admitted that the country was overwhelmed by the scale of the tsunami and nuclear crisis.
He said officials should have admitted earlier how serious the radiation leaks were.
Chief Cabinet Secretary Yukio Edano said: 'The unprecedented scale of the earthquake and tsunami that struck Japan, frankly speaking, were among many things that happened that had not been anticipated under our disaster management contingency plans.
'In hindsight, we could have moved a little quicker in assessing the situation and coordinating all that information and provided it faster.'
Nuclear experts have been saying for days that Japan was underplaying the crisis' severity.
It is now officially on a par with the Three Mile Island accident in Pennsylvania in 1979. Only the explosion at Chernobyl in 1986 has topped the scale.
Deputy director general of the NISA, Hideohiko Nishiyama, also admitted that they do not know if the reactors are coming under control..."


This lack of transparency is mirrored in other industrial accidents around the world, significant among them, the Gulf oil spill - the consequences of which are still being concealed and denied by the US government. 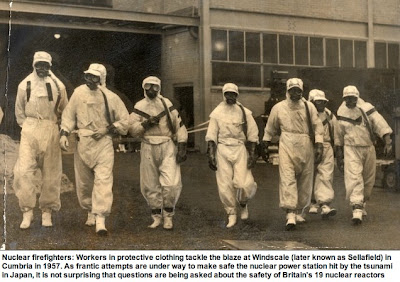 The Mail also unveils this astonishing story of a nuclear accident in Britain in 1957, which has led to cancer decades later in a region that is still actively being despoiled by continuing deposits of radioactive nuclear waste.  Everyone should  become aware of such deceptive practices and be under no illusions about the motivations of corporate officials and regulatory agencies that fear accountability and financial liability above any considerations of public safety. 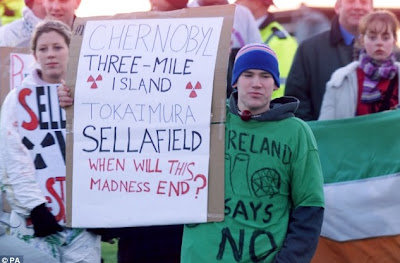