I curate therefore I am! 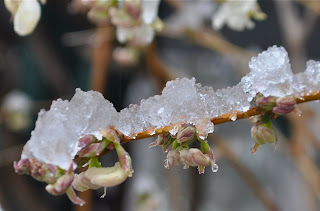 Today is the first day of spring, so it was a bit of a shock to peer outside my window upon awakening, and find that everything was covered in white melting snowfall...which promptly crystalized into heavy ice even before my coffee was brewed.  Outside the porch, this early blooming witch hazel dispersed divine perfume even so!
Next thing you know, it was beyond a thrill when Brian Lehrer took my nervous call on his NPR radio show.  He was interviewing Steven Rosenbaum, the author of "Curation Nation"...and gave me 20 seconds towards the end of the segment, at around 11:26 in, to explain the purpose of Wit's End. 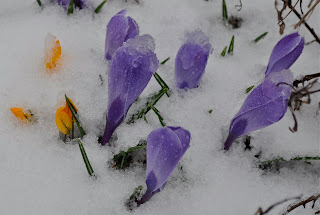 For those who have the inclination to listen to the entire segment, the concept of internet curating goes well beyond traditional editing, because it includes unique original content as well as links to primary sources - and embraces not only written works but, on the web, can also include photography, music, video and art...exactly the juxtaposition that occurs on this blog (with various degrees of efficacy.) 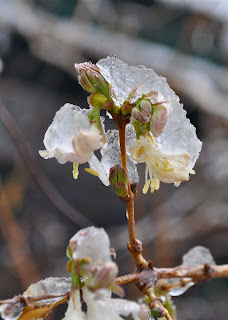 Having now been acquainted with this au courant designation, I am quite content to regard myself as the "accidental curator" of all things related to trees dying from pollution...especially because the next time someone accuses me of being unscientific, I will be able to inform them that not merely am I most humbly not a scientist, but that instead I AM a  proud curator!  For instance here is a contribution from a reader, from the Pacific Northwest, who submitted this  iconic emblem of the plight of all trees, everywhere. 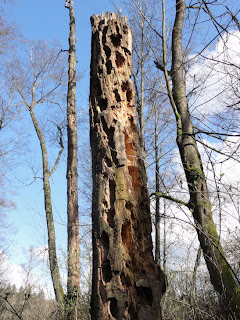 And now for today's gallery - all of the photographs and descriptions that follow are from the website of the French artist HeHe: 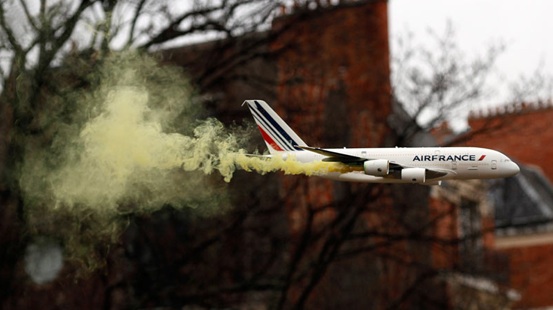 Pollstream is a collection of ideas, forms and images that explore man-made clouds. We are fascinated by clouds because of their movement, and because of their natural undefined form - which makes them difficult to be fixed in time. 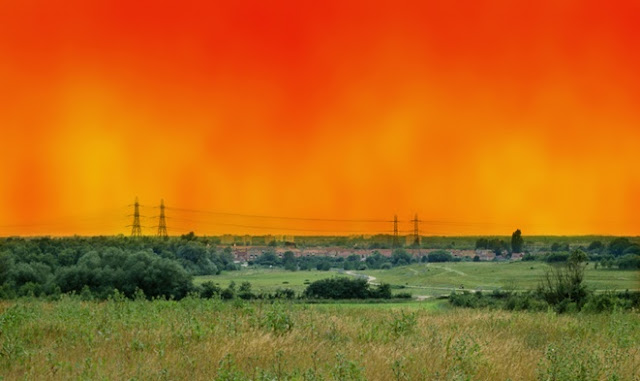 Across a number of projects, clouds are used as a visual metaphor to aestheticise emissions and chemical toxins. In popular culture, the meaning of man-made clouds, have changed to reflect the concerns of the ages: They have been used in the 19th century as a sign of economic prosperity, in the 1920's to express spiritual energy, in the 60's as am emblem for workers revolution, in the 80's as the ultimate icon of pollution. Likewise, pollstream offers alternative meanings for today's man-made clouds, which, hopefully, challenge the ideologies of our times. 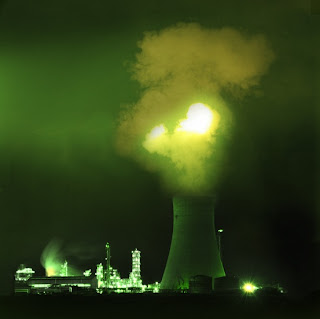 This project is an intervention in environmental ethics. It creates a series of environments and processes to monitor and localise pollution at the very same time that it is produced; to conceptualise oneself as responsible – collectively and individually – for our emissions. As consumers our default position is one of disengagement – we rely on others to clear up our mess, to hide it in landfill, for example, or toxics inside our body. And the abstraction of inescapably globalised pollution, escalating beyond the control of any individual nation state, can easily undermine a sense that localised actions are worthwhile or effective. Pollstream, using visual, kinetic and sonic technologies, undermines these typical defences of disengagement by speeding up the normal time it takes for our actions in and on the environment to have consequences. Across a number of projects, a sense of constant rather than delayed feedback is created. Thus, in its final form, color coded communal information is projected onto the vapor of a power plant that is visible to all residents. The movement of the green vapor emission changes size to show levels of energy being consumed at any given time; the chimney becomes a community measuring tape, a shared canvas. Nuage Vert is the ultimate aesthetisation of pollution, while seeking to draw critical attention to it. It becomes a sign of wonder, a spectacle; a space is opened up for the spectator. Could they become mesmorised by a beauty that is, literally and metaphorically, a smokescreen? Will they
retreat to making this (terrible) beauty another defense?

Whenever we see a chimney emitting smoke or vapour we immediately think of it as pollution. Chimney vapour is emblematic, symbolic of pollution. At the same time, these emissions are intriguing and beautiful to watch as they show the movement of the air, signalling the direction of the wind, functioning both as weather-veins and landmarks in the urban landscape. Supposing such smoke signals were to signal sustainability, functioning as a kind of community measuring tape, displaying the local effort made by citizens, when they consume less energy (or more). The chimney becomes a more complex sign, of environmental effort as well as wasted energy. 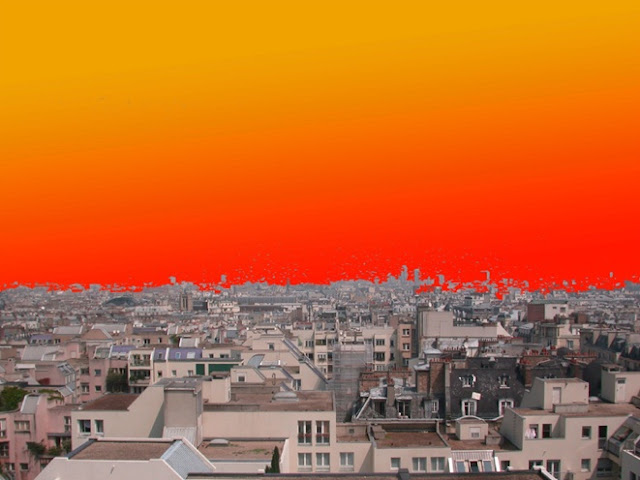 Originally proposed for a waste burning plant on the edge of Paris (image 3) and currently for a power plant in a residential zone of Helsinki, the project projects an informational layer onto chimney emissions. The system to realise Nuage Vert will track the movement of the plume and project back a flourescent laser outline onto its contour. The contour will change colour to show the levels of energy being currently consumed by local residents. An 'advertising' campaign will be designed to inform people of the colour spectrum being used and to tempt people to consume less energy. 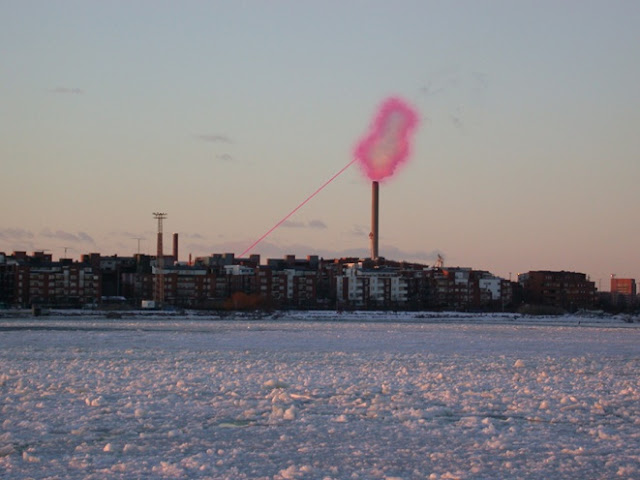 By projecting changing levels of consumer demand for energy onto the plume, Nuage Vert is an experiment that makes the chimney function as a kind of community measuring tape, displaying the local effort made by citizens, publicly showing residents levels of energy consumption. The chimney becomes a more complex sign, of the environmental effort made by individuals as well as industrial pollution. 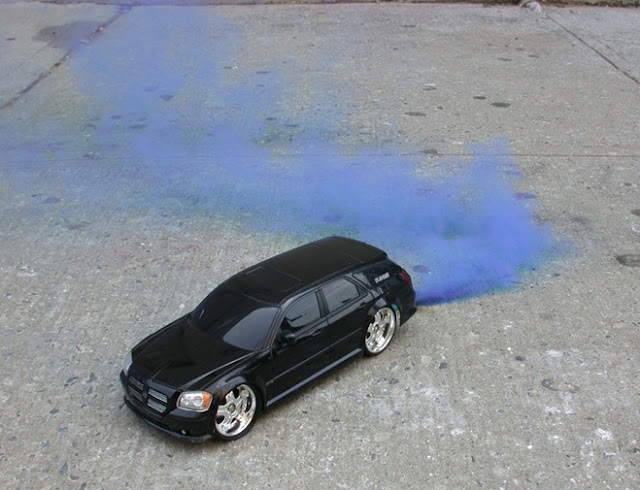