I was so thrilled to see these two videos about lichens as indicators of air pollution from Oregon. There are many photographs of rampant nitrogen-loving lichens on the East Coast posted here on Wit's End - for one example, this lengthy essay from last March in Boston about Bark Atrophy Lichen Decline, which is closely associated with dying trees, that includes typical samples of lichen-smothered branches...but the work being done by Sarah Jovan is the best research I've found so far that validates the notion that nitrogen pollution is rampant.  It has been made very clear that certain lichens thrive in high levels of nitrogen, while others are negatively impacted.  There are so many epiphytic lichen species examined in this research (263!!), and so few on the East Coast (at most five that I can find...talk about loss of biodiversity!).  I'm going back to Boston next Monday for a week - it is going to be interesting to compare lichen spread and the condition of some of the exact trees after another year's inevitable decay.

The indispensable treasure associated with the videos is this publication, "Lichen Bioindication of Biodiversity, Air Quality, and Climate:  Baseline Results from Monitoring in Washington, Oregon and California," which suffers from the usual lag in time between data collection and publication, and the present rapid disintegration of the ecosystem - but is an otherwise absolutely splendid, painstakingly assembled magnum opus, with luscious photographs (like all those that follow) and illuminating charts.  I highly recommend taking a peak so I will just include the following snippets (in lavender): 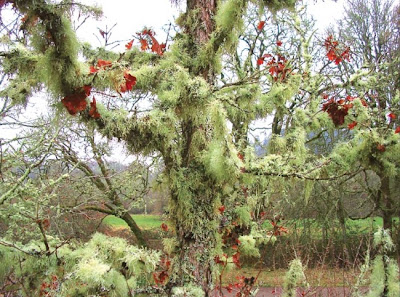 Sidebar 1: Why use bioindicators?
What is the rationale for biomonitoring when we are technologically capable of directly measuring forest conditions? Perhaps the most immediate benefit is the ability to map conditions at a sampling intensity that is prohibitively expensive with active monitors. 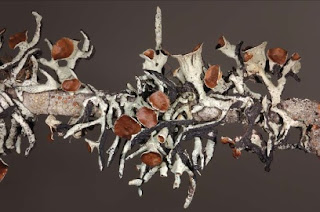 Moreover, bioindicators are intimately tied to local conditions. Their responses to stressors are often more representative of cumulative impact on the function and diversity of the surrounding ecosystem than are active monitors. 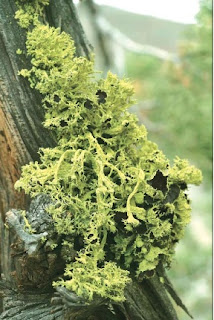 ...The importance of N as an ecological stressor in some west-side Pacific Northwest forests is unmistakable given the clear association of N/pH lichen indicator groups with the air quality gradient. Forests near cities and agriculture are potentially the most impacted by poor air quality, as suggested by the spatial distribution of air scores and verified by enhanced accumulations of N and S in collected lichens (Geiser and Neitlich 2007). ...Estimated pollution hotspots are somewhat localized as compared to parts of the Northeastern United States where pollution is more a regional issue (Fenn et al. 2003a, 2003b). If emissions intensify, the geographic scope of pollution impacts may, of course, extend in tandem. 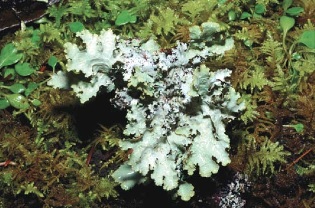 It hardly seems necessary to point out that emissions have intensified, to put it mildly! 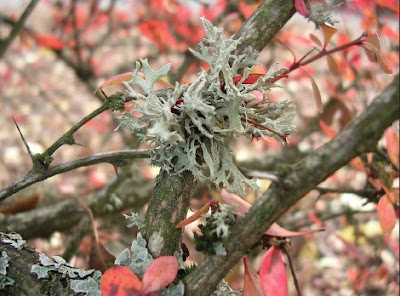 ...About 24 percent of land area in the western Pacific Northwest is estimated to experience air quality that is classified as “degraded” or worse (Geiser and Neitlich 2007). Spatial patterns in lichen community composition as seen in these baseline data illustrate how communities might change should air quality, and N/bark pH effects in particular, worsen. 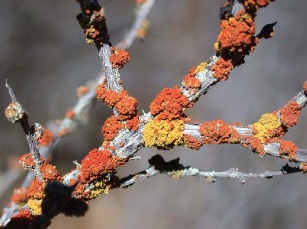 ...Nitrogen compounds are important constituents of air quality in the greater Sierra Nevada, as evidenced by (1) the distribution of nitrophytes in the FIA Lichen Community Indicator data (2) accumulation of N in Letharia vulpina collections, (3) N estimates from the CMAQ model, and (4) various short-term N monitoring campaigns (Fenn et al. 2003b, 2003c). Altogether these varied data sources make a clear case for high N impact to forests in the southwestern Sierra Nevada, a scenic region lavish with over 1.2 million ha of land in 17 federally protected class I areas. Ozone is also a major stressor in these forests as evidenced by the FIA Ozone Indicator, where 82 percent of ozone biosites in the San Joaquin Valley air basin (all located in the southern Sierra Nevada) and 27 percent of biosites in the Mountain Counties air basin (central and northern Sierra Nevada) exhibited foliar damage between 2000 and 2005 (Campbell et al. 2007). 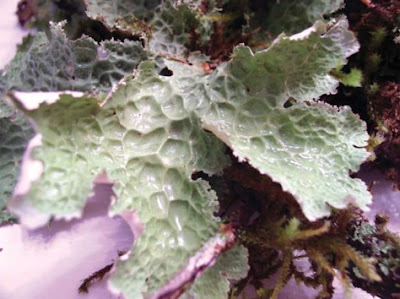 If we extrapolate from the latest data, emphasized above, that extended from 2000 to 2005, with the certain knowledge that background ozone is inexorably rising, I think the assumption can be made that foliar damage can be near universal in at least some places by now. 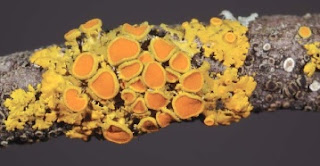