The first western reporter to arrive at the scene writes, in an article well worth reading, "In my 30 years as a war correspondent I have covered more than 20 conflicts and several major earthquakes, but I have never seen anything on this scale," and adds..."There is no crying, no hysteria, no anger.  It is in the psyche of the Japanese people to do what they have to do in silence and with dignity...As we look on, rescuers gently retrieve another body, cradled in a filthy blanket - all they had to hand.  The love, respect and ceremony with which these people wrap their dead - people they knew - is perhaps more touching than any tears." 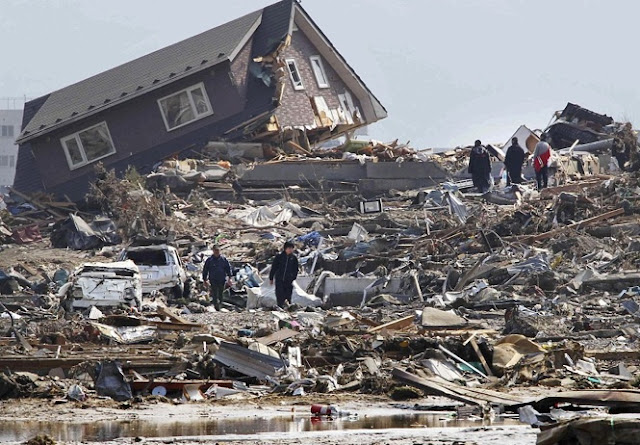 I wonder if Americans will behave with similar decorum in the aftermath of disaster following days deprived of water, food, and electricity.

Update:  I have to include this trenchant comment by Mike Roddy from the discussion at Climate Progress, because it expounds brilliantly on the perils of our current energy policy:

This is without even considering disposal issues- which are not solvable- and the problem of production of weapons compatible plutonium that will last for thousands of years. the only question is whether terrorists or governments will grab and possibly use those awful weapons.

Now, we’re hearing that Chernobyl was the Russians’ fault, that Three Mile Island was no big deal, and that Japan is going to be just fine, and that the alarmists need to shut up. It’s not just that they are worse than the fossil fuel companies: they are the same, because they serve each others’ purposes. Nuclear is doomed to fail, enabling people like the Kochs to pump gas, oil, and coal into our air for many more decades if we let them.

Obama could rise to the occasion here, and announce to the country and the world that the time has come for truly clean and renewable power. The people would support this effort. Between the Executive branch and the public, our pitiful excuse of a Congress could be shamed and defeated on the most important issue in human history.

Instead, the President is still saying “all of the above”, including nuclear, gas and “clean coal”. It might just have be up to the people after all.

The US has an historic opportunity to lead here. We are the ones who detonated the bombs in Japan, a country whose suffering is heartbreaking and undeserved. The Japanese are ready to go forward, and so is Germany, Scandinavia, and the rest of the world. If we don’t take this opportunity to do the right thing, any remaining claims to global leadership or even influence will disappear forever."
Posted by Gail Zawacki at 8:37 AM