People are starting to notice there is a problem with the leaves - they just don't understand why.
There's a bit of a a logical fallacy there, since the nurseryman variously describes the trees as suffering from heat, then compares their condition to thirst. Doesn't he water them?
I called the reporter, Adam Rodriguez, to explain that last year in New Jersey the leaves turned fall color and fell off early too, and not from heat - it was a cool, wet summer - but because they are losing chlorophyll due to damage from exposure to toxic greenhouse gas emissions. I hope he does a follow-up!
From the EPA: "Higher levels of ground level ozone limit the growth of crops."
Well I guess it doesn't get any simpler than that! 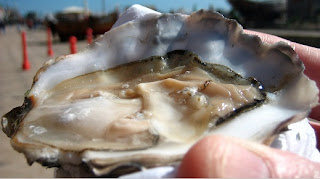 More on the rapidly accelerating loss of life in the oceans, which grieves me endlessly... oysters are dying from warming waters. A new and virulent strain of herpes proliferates when temperatures exceed 60 degrees F, and is such an efficient killer it can wipe out more than 80% of an infected bed in a week. Which seems rather silly and shortsighted of those germs, because they are destroying their host so quickly it will ensure they themselves die off too, in short order - but then, they are just stupid viruses...oh, wait...
Posted by Gail Zawacki at 11:01 AM