A new study strongly indicates, after much frantic speculation, that the most widely used pesticides in the world are to blame for Bee Colony Collapse.

"It says even low concentrations of the pesticides may be more deadly then previously thought due to their high persistence in soil and water, supporting claims for the role that pesticides may play in bee deaths. 'The acceptable limits are based mainly on short-term tests. If long-term studies were to be carried out, far lower concentrations may turn out to be hazardous. This explains why minute quantities of imidacloprid may induce bee decline in the long run,' says study author Dr. Henk Tennekes." 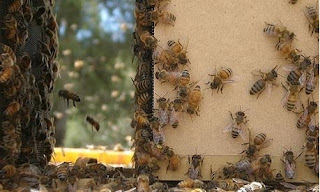 Contrast the sense of dire urgency expressed in this prediction:

"If the honeybee disappeared off the surface of the globe forever we'd be facing up to an unimaginable food crisis,' said a spokesperson. 'This latest research only adds to the evidence that is already strong enough to justify an immediate ban on neonicotinoids today.'"

With this inanity from the UK government! The usual, "more studies are needed!" garbage:

Responding to the new study, Defra said the UK would not be following some other EU countries in restricting the use of neonicotinoids.

'This research highlights a need for more data on long-term risks to bee health. We have already been considering this and pesticide companies will soon need to provide this data under new EU rules.

'We will keep this area under review and will not hesitate to act if there is any evidence of an unacceptable risk to bees,' said a spokesperson."