Yet another spring flower, this daylily was photographed November 4 and has a cluster of buds. Crazy! 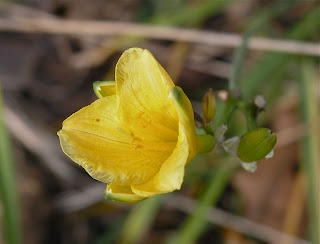 ColoradoGuy took pictures of foliage in New Jersey the day before Thanksgiving, November 21, 2007 and posted them here. Yesterday, which was Saturday, November 8, 2009, I followed his footsteps and have uploaded images of the current appearance of the same locations, immediately beneath his photos. Above is the lovely scene he recorded of the Passaic River from
Horseneck Road bridge. Click on it for the full effect. 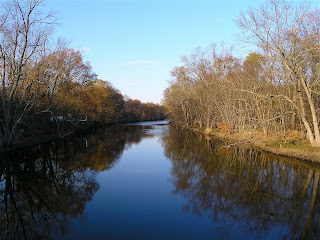 Contrast that with how it looked when I arrived. 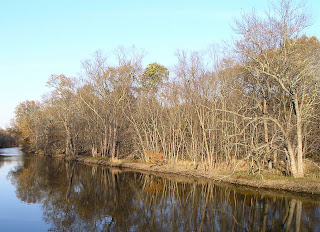 It wasn't easy to find a leaf worth a picture, but I liked the shape of this one. 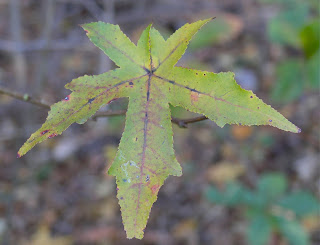 From my shadow on the bridge it's apparent how huge the tree in the
foreground is. It's terrible that it and all the others are dying. 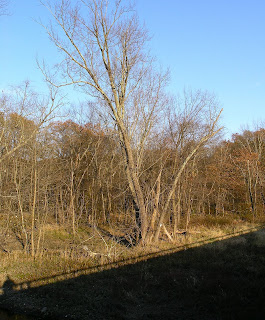 We haven't seen anything like these saturated reds this fall, and
the trees have lost their leaves at least a month earlier than in 2007. 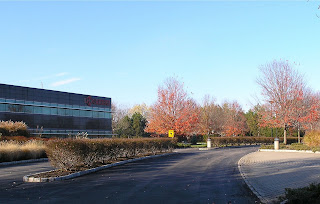 Notice that at least one burning bush, in the front of this hedge,
has been removed - presumably because it died in the last couple of years 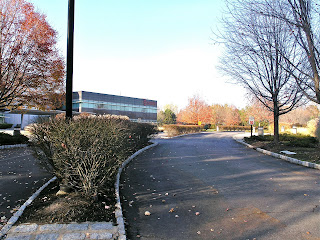 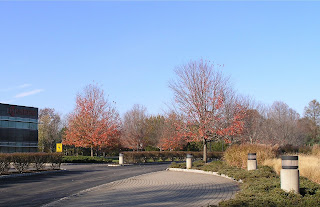 Next, our peripatetic mountaineer shot some photos of trees in glory
at a park across the street. But when I went there, a hoard of workers were already loudly
blowing the brown leaves into piles. 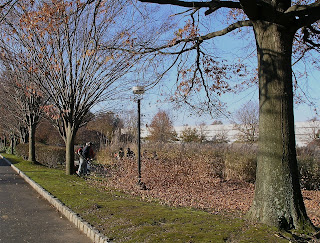 And there was nothing remotely comparable to the flaming
color that was there, 3 weeks before this time of year, in 2007. 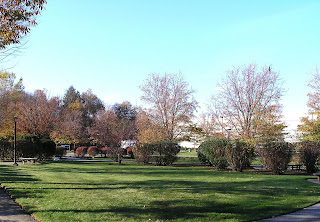 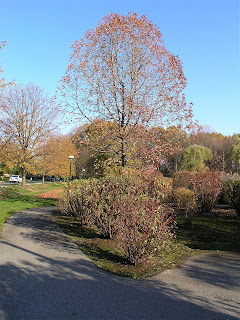 Here is the breathtaking setting for a bench back then. But who would want to sit and contemplate the barren waste
our landscape is fast becoming now? 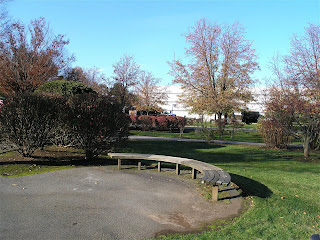 Since we were in the neighborhood, we stopped at the Montclair Art Museum to view an exhibit of Cezanne and his influence on American Painters. There is a room there dedicated to George Innes, who painted in Montclair in the 1800's. 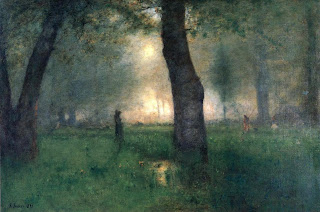 What a fabulous collection. At the rate we're going, we will be left only with art, photographs, recordings and stories with which to remember the beautiful environment and animals we once had. 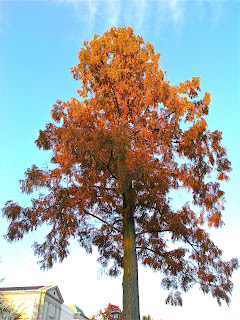 This magnificent dawn redwood stands in front of the museum. You can't tell from a distance, but it is fringed with long streams of tiny baby cones. Some mature samples from last year are on the ground, not even an inch across. I love the way it looks like an array of diminutive pouting human lips. Nature often imitates her creations in amusing ways, like a gigantic fractal. 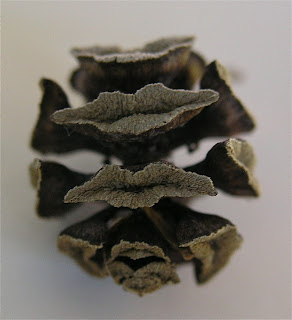 Another truly amazing video can be seen here, a news conference with two young women who have started their fast.

From a primer of neat brevity explaining climate change: