I saw this brook trout, hooked by a "catch and release" recreational fisherperson, swim to freedom. Click - it's a joyful escape! 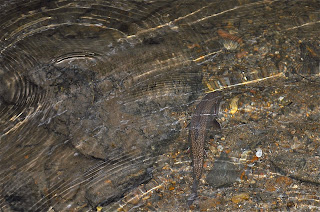 Meanwhile, there are so many disasters occurring - and so many scientific reports warning of even worse disasters - it's just overwhelming. A comment from John in New Zealand on an earlier post included this link about the difference in tropospheric ozone levels between the northern and southern hemispheres, which states:

"Prolonged exposure to ozone concentrations greater than 40 parts per billion by volume (ppbv) is considered detrimental to human health and plants, including crops. Typical surface ozone levels are 50–80 ppbv in the Northern Hemisphere over some polluted regions and 25–35 ppbv in the Southern Hemisphere."

That observation sent me scurrying back to links posted earlier, on the Basic Premise page (at the top of the blog), where I found that indeed according to this map from our very own US EPA report, it appears that some parts of the country got up to levels above 125 ppb, back in 2004! (click to enlarge) 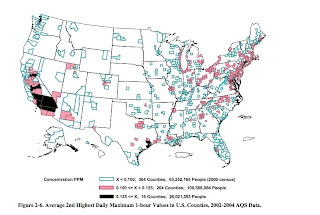 Yesterday, after a discouraging prowl through their documents all morning, I went on a wonderful (if soggy) afternoon hike with first daughter. Pictures are posted below, with excerpts from the EPA 2009 Provisional Assessment. 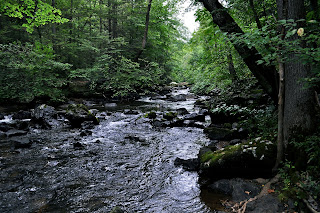 We hiked the Columbia Trail which wends along a river from High Bridge to Califon that is punctuated with some rather spectacular boulders from an ice age long ago. 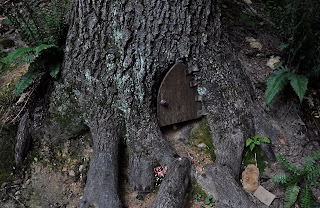 Someone has made little gnome shelters in the trunks of trees. 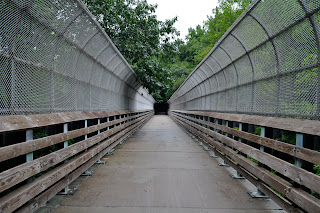 A refurbished bridge transverses a deep gorge, the site of the collapse causing a somewhat dramatic train wreck about a century ago. 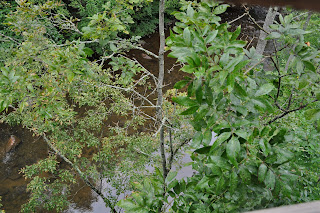 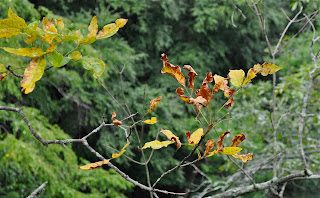 and to see that the foliage is in severe distress. 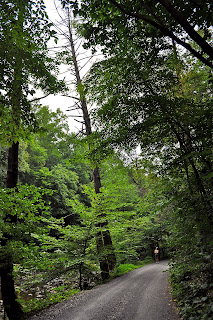 First daughter is a tiny speck against this huge dead conifer. 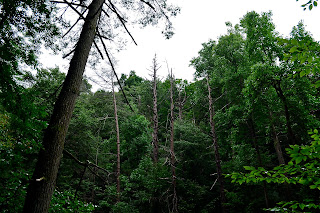 There are clusters of them along the water's edge.

Recently published meta-analyses have quantitatively compiled peer reviewed studies from the past 40 yr on the effect of current and future O3 exposures on the physiology and growth of forest and crop species (Feng et al., 2008; Wittig et al., 2007; Wittig et al., 2008). In compiling more than 55 studies, Wittig et al. (2007) reported that current O3 concentrations in the northern hemisphere are decreasing photosynthesis (-11%) and stomatal conductance (-13%) across tree species. They also found that younger trees (<4>3 than older trees. Further, the authors also found that damage to photosynthesis is consistent with the cumulative uptake of O3 into the leaf (Wittig et al., 2007). In another meta-analysis, Wittig et al. (2008) reported that current ambient O3 concentrations (~40ppb) significantly decreased annual total biomass growth (-7%) across 263 studies. However, this effect could be greater (-11 to -17%) in areas that have higher O3 concentrations and as background O3 increases in the future (Wittig et al., 2008). In a meta-analysis of 52 studies of wheat, Feng et al. (2008) reported that current ambient O3 concentrations may be decreasing yield by an average of 17.5%. The authors also found that O3-induced decreases in yield were greater in wheat grown in the field than grown in the in pots. Together these meta-analyses demonstrate the coherence of O3 effects across numerous studies and species using a variety of experimental techniques.

Two companion papers (McLaughlin et al., 2007a, 2007b) investigated the effects of ambient O3 on tree growth and hydrology at forest sites in the southern Appalachian Mountains. The authors reported the cumulative effects of ambient levels of O3 decreased seasonal stem growth by 30-50% for most trees species in a high O3 year in comparison to a low O3 year (McLaughlin et al., 2007a). The authors also report that high ambient O3 concentrations can disrupt whole tree water use and in turn reduce late-season stream-flow (McLaughlin et al., 2007b). The finding that O3 exposures disrupt tree water use is consistent with several recent studies that report O3 exposure resulting in loss of stomatal control, incomplete stomatal closure at night and a decoupling of photosynthesis and stomatal conductance (Gregg et al., 2006; Grulke et al., 2007a, 2007b). 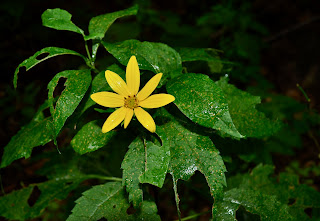 which also had this to say about foliar and crop damage:

Several new studies have been published on the incidence of foliar injury in the field due to ambient O3 concentrations (Campbell et al., 2007; Chappelka et al., 2007; Davis, 2007a, 2007b; Davis and Orendovici, 2006; Kohut, 2007). Kohut (2007) presented a foliar injury assessment for 244 National parks over 5 yr. The author reported that risk of foliar injury was high in 65 parks, moderate in 46 parks, and low in 131 parks. Chappelka et al. (2007) reported that the average incidence of O3-induced foliar injury was 73% on milkweed in the Great Smokey Mountain National Park in the years 1992-1996. Three papers (Davis, 2007a, 2007b; Davis and Orendovici, 2006) reported O3-induced foliar injury in several plants species in National Wildlife Refuges in Maine, Michigan and New Jersey. In a study of the west coast of the U.S, Campbell et al. (2007) reported ozone injury in 25-37% of biosites in California forested ecosystems from 2000-2005.

The effect of O3 on crop health and productivity is an important area of research, and several studies have been published on this topic since the 2006 AQCD. For example, in a study of peanuts in North Carolina, near ambient and elevated exposures of O3 reduced photosynthesis and yield compared to very low O3 conditions (Burkey et al., 2007; Booker et al., 2007). In another study, Grantz and Vu (2009) reported that sugarcane biomass growth significantly declined under O3 exposure. This result is important because sugarcane is being considered as a bioenergy crop to be grown in the San Joaquin Valley of California, an area with high levels of ambient O3. 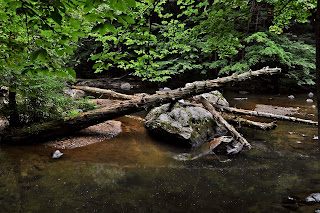 So, just to completely ruin my morning, I delved into the hitherto unexplored "Air Quality Criteria for Ozone and Related Photochemical Oxidants", USEPA, 2005 - the motherload referred to in subsequent updates as "CD", which is available for download in Volumes I - III, 591, 751 and 491 pages respectively. Let it not be said that there is no information about the effects of ozone available to anyone who cares to look for it...These tulip poplar leaves have minute holes, harbingers of existential damage from toxins in the atmosphere. 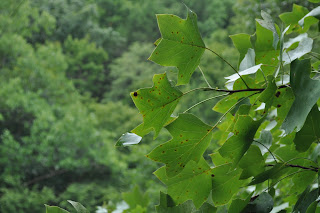 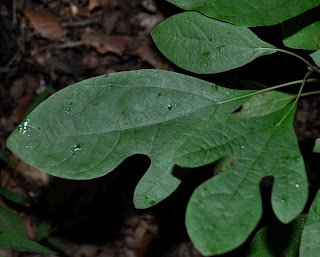 I have already mentioned that sassafras leaves are almost unique in that they have different shapes on the same tree, and here are all three! One whole oval, a two lobed, and a three lobed!
And just as an amusing aside, there is a section detailing the court cases that have buffeted EPA regulations, including constitutional challenges to their authority to regulate, and demands that they do regulate, such as American Lung Association vs. Whitman (no wonder she resigned to "spend more time with her family"!), accusing EPA of dragging its feet on completing reviews of the scientific evidence indicating ozone is harmful to human health and the environment, etc...including this utterly ludicrous decision in 1999 (found on page 1-5):

"...the D.C. Circuit Court directed that EPA should consider the potential beneficial health effects of O3 pollution in shielding the public from the effects of solar ultraviolet (UV) radiation, as well as the adverse health effects."

This in a lawsuit brought by the American Trucking Association! 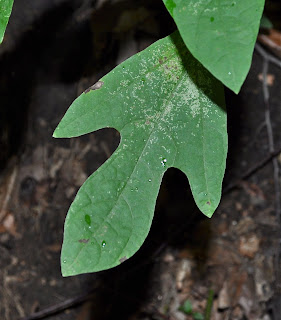 But back to the sassafras leaves - they have stippling characteristic of exposure to ozone.
Next, this morning I found this story on yahoo news which says farmers all over are bewildered because the harvest of everything from cranberries to corn is coming early this summer. 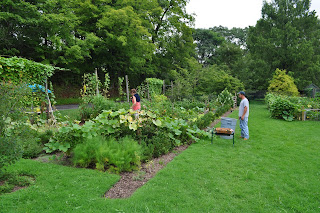 I stopped by this enclosed garden today. I have been envious for some time - it is so organized, and the weeds are under control, unlike Wit's End! 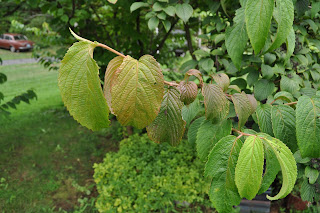 But the shrubs have evidence of chlorosis. Above is viburnum, and below, cotinus. 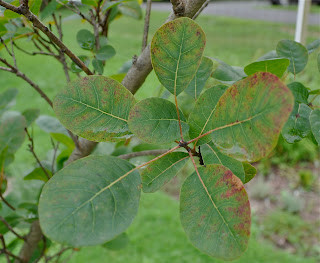 Most worrisome though is the photograph below. On the left, green beans exhibit terrible leaf damage, and on the right, the swiss chard has not only browning, shriveling leaves, but they are only a fraction of the size they should be.

On top of this ClimateProgress has a report that maintains there are ominous hints our oxygen supply is becoming depleted. Only go and read that if you are fortified against panic. 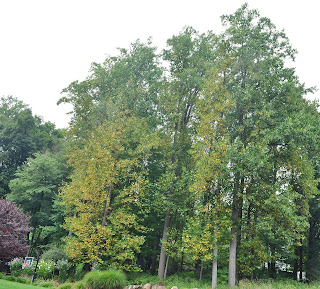 Since people are noticing that leaves are turning fall colors just a bit early, I collected a few of the more lurid examples along the way and placed them on the kitchen floor to photograph a collage. 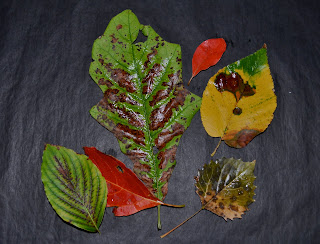 Which Coco decided to appropriate. 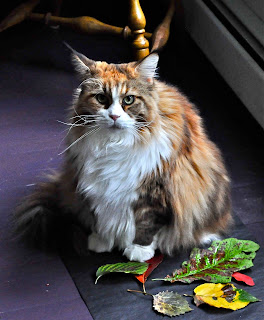 And the most, very much most alarming study I have found is this one, which speculates - but what I wonder is, maybe this is ALREADY HAPPENING:

"Climate changes will also lead to increases in the emission of CO2 and methane from wetlands, nitrous oxides from soils, volatile organic compounds from forests, and trace gases and soot from fires. All these emissions affect atmospheric chemistry, including the amount of ozone in the lower atmosphere, where it acts as a powerful greenhouse gas as well as a pollutant toxic to people and plants.

Although our understanding of other feedbacks associated with climate-induced ecosystem changes is improving, the impact of these changes is not yet accounted for in climate-change modelling.

An international consortium of scientists, led by Almut Arneth from Lund University, has estimated the importance of these unaccounted "biogeochemical feedbacks" in an article that appears as Advance Online Publication on Nature Geoscience's website.

They estimate a total additional radiative forcing by the end of the 21st century that is large enough to offset a significant proportion of the cooling due to carbon uptake by the biosphere as a result of fertilization of plant growth."