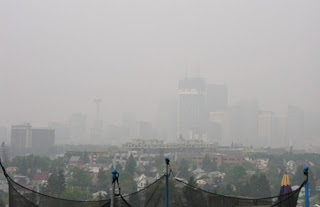 Wildfires are raging in Canada.

'To put it into perspective, the 10-year average for [total hectares burned by this time of the year] is 90,000 hectares,' Eamer said...

In Calgary, the skyline was barely visible beneath the haze. Resident Dominic Filocha said the city smelled like “a barbecue being fired up.”

I found this video over at SurvivalAcres - there is a second at his site, with better quality visual. Watching the power of moving earth is indescribable. Fresh landslides in China killed people and buried homes in the past few days, following the horrific landslide in Zhouqu where over a thousand people died. 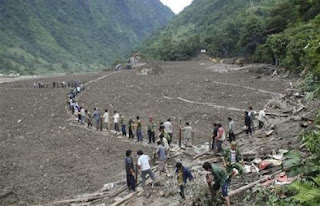 People use wood logs and boards to pave a path into a village submerged by landslides in search for people buried in mud in Puladi township, in southwest China's Yunnan province, Wednesday, Aug. 18, 2010. Fresh landslides rocked another area of China on Wednesday, sweeping through a mountain town in the southwest of the country after days of heavy rains. (AP Photo) 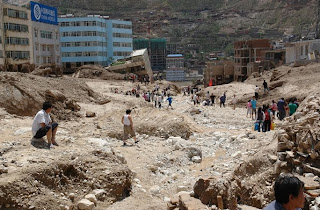 August 8, Zhouqu
Lately there is a growing tally of many more record-breaking precipitation events, more frequent and heavier downpours, thanks to climate change (and thanks to all the malefactors who deny it!) So maybe that's enough all by itself to account for these landslides.
Or maybe, just maybe, it has something to do with vegetation dying. If the roots are stunted and shriveling anything resembling the rate that the visible parts are, then there's not much underground to hold the dirt onto the sides of hills and mountains.
Just sayin'...
And reproduced below, because I like it, is another recent comment by Lewis Cleverdon at Climate Progress. I wish Lewis Cleverdon had a blog. I would read it every day.
Posted by Gail Zawacki at 1:43 PM