To see how huge this old chestnut tree is, compare the width of the trunk to the tiny human hands in the lower left corner. 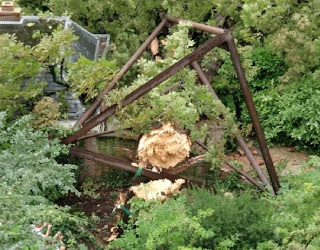 Anne Frank's tree of hope has fallen, in the same year that saw the death of Miep Gies, who risked her life to hide the family from the Nazi's, at age 100. 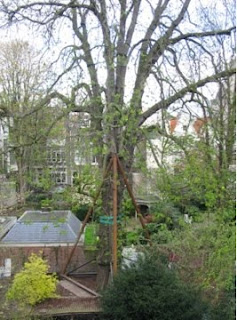 "Sad news, the 150-year-old horse chestnut that brought comfort to Anne Frank as she hid from the Nazis in World War Two has toppled in high winds and heavy rain.

The tree, whose trunk was diseased and rotten, snapped a metre (3ft) above the ground, and crashed into neighbouring gardens in Amsterdam at 13.30 local time, it is reported.

It smashed into a brick wall and sheds, but nobody was injured.

The Anne Frank House museum, which has a million visitors a year, escaped unscathed during Monday’s poor weather.

“Someone yelled: ‘It’s falling. The tree is falling,’ and then you heard it go down,” museum spokeswoman Maatje Mostart told the Associated Press. “Luckily no one was hurt.”

It smashed into a brick wall and sheds, but nobody was injured.

The Anne Frank House museum, which has a million visitors a year, escaped unscathed during Monday’s poor weather.

“Someone yelled: ‘It’s falling. The tree is falling,’ and then you heard it go down,” museum spokeswoman Maatje Mostart told the Associated Press. “Luckily no one was hurt.”

A global campaign to save “the Anne Frank tree” was launched in 2007 after Dutch officials and conservationists declared it a safety hazard and ordered it felled. They feared it could topple and crash into the museum.

But the Support Anne Frank Tree Foundation won a court injunction in November that year, stopping the city authorities from chopping it down. Neighbours and campaigners argued that, as a symbol of freedom, the tree was worth making extraordinary efforts to preserve.

But it was blighted with fungus and moths, and two years ago conservationists encased the trunk in steel girders to prop it up.

The Netherlands’ Trees Institute, a leading supporter of the project to save the tree, said it was “unpleasantly surprised” to hear it had fallen.

“On the advice of experts in tree care, it had been calculated that the tree could live several more decades” the institute said in a statement. “Alas, in the event it seems that nature is stronger.”

The Jewish teenager referred several times to the tree in the diary that she kept during the 25 months she remained in hiding.

She died, aged 15, the following year in Bergen-Belsen concentration camp. 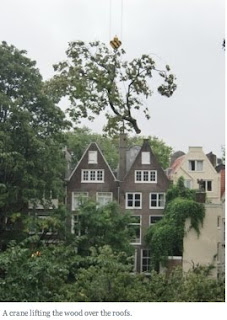 Passages from the diary:

"23 February 1944
The two of us looked out at the blue sky, the bare chestnut tree glistening with dew, the seagulls and other birds glinting with silver as they swooped through the air, and we were so moved and entranced that we couldn't speak. 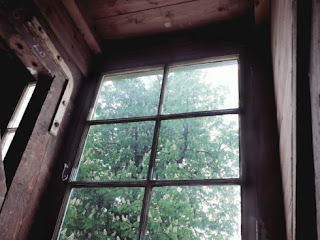 Otto Frank, her father, in 1968 said:
"How could I have known how much it meant to Anne to see a patch of blue sky, to observe the seagulls as they flew, and how important the chestnut tree was for her, when I think that she never showed any interest in nature. Still, she longed for it when she felt like a bird in a cage. Only the thought of the freedom of nature gave her comfort. But she kept all those feelings to herself."