So said Albert Einstein.
But, this is mostly a blog about trees - so here is one, in front of my local grocery store. 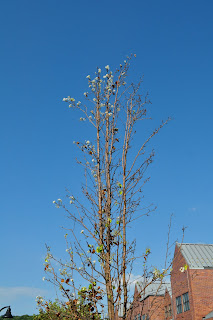 It's a fairly typical example of a tree damaged by ozone, where the leaves have all shriveled up and fallen off, and in desperation, the pathetically incipient corpse is producing flowers in August, in a frantic, final attempt to reproduce. 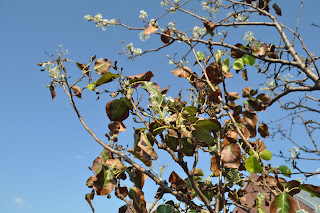 Listen to an amazing voice, and then scroll down, we will check on the tree again... 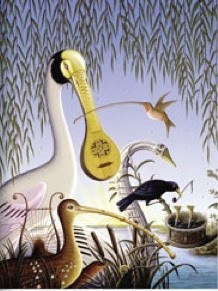 That picture accompanies a fascinating article in Conservation Magazine about how animals respond to the noises of our industrial society - a little bit of it, such as blackbirds learning to replicate the sounds of cell phones ringing - is funny. But most, not surprisingly, is intrinsically tragic. It's interesting of course that people have spent their careers actually researching such things - but they have! In the sense that Barack Obama meant when he said, "This shit would be really interesting - if we weren't in the middle of it."
If you're looking, it's possible to uncover everywhere, the notion that America is a failed state, that collapse is imminent...that humans have really been hellbent for decades if not centuries on destroying the ecosystem. Here are the flowers of our abysmal tree. 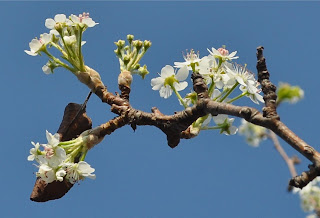 Just today I came across a hitherto unknown (to moi) giant among doomsters, Dr. Guy McPherson, who writes the brilliant blog, Nature Bats Last, as well as having authored innumerable published articles and books. Finding his contribution so late - after two years of incessant searching for information! - raises a question that haunts me constantly: Why are there so many enlightened individuals laboring in (relative) obscurity - all cognizant of the same perils we face - but yet so incredibly, uselessly disorganized and disoriented?
Why are the forces of what is clearly morally right in such impotent disarray - while the forces of evil (corporations, the revolving door between profiteers and governments and co-opted "green" non-profits) so ruthlessly and fantastically, devotedly organized? (you know...the fanatics are full of confidence and good men are full of doubt...or whatever that quote is...)
Glenn Greenwald provides a collection of vignettes indicative of a civilization that is in eclipse - from closed libraries, reduced public school days, darkened street lights, a paranoid-inducing increase in personal surveillance by murky government agencies... in the context of pointless, incredibly expensive military interventions abroad - all of which constitute baby steps on the path to fascism.
Well. How can I end this ramble? Go back to Bjork...listen to the interview at NPR. She has something to say about trees.
Posted by Gail Zawacki at 8:43 AM