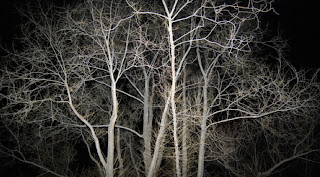 This photograph is from a story on NPR about research into the mathematics of trees.  The rest of the pictures are from the damage done by extreme winds during recent storms in the UK and Europe (y'all know I love pictures of trees crushing cars!).  Of course, I do believe that violent weather from climate change is going to knock down more trees than usual.  But that doesn't mean that their aerodynamic design hasn't become less secure as they lose anchoring - because their roots are shriveling up, invisibly, from air pollution. 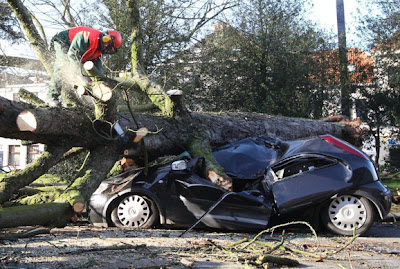 Here is the abstract from the research:  "Examining botanical trees, Leonardo da Vinci noted that the total cross section of branches is conserved across branching nodes. In this Letter, it is proposed that this rule is a consequence of the tree skeleton having a self-similar structure and the branch diameters being adjusted to resist wind-induced loads." 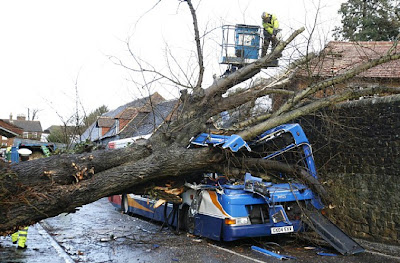 Following is the report on NPR, which is titled "The Wisdom of Trees (Leonardo da Vinci Knew It)". 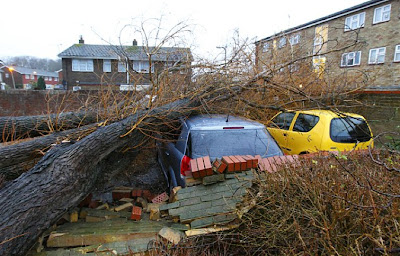 Hurricanes topple plenty of trees, but when you think about it, the more amazing thing is that many trees can stand up to these 100-mile-per-hour winds. 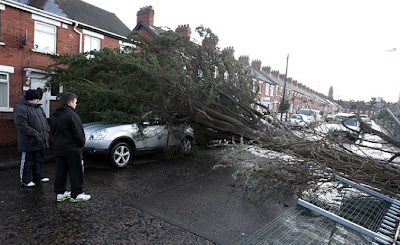 Now a French scientist has come up with an explanation for the resilience of trees. And astonishingly, the answer was first described by Leonardo da Vinci 500 years ago. 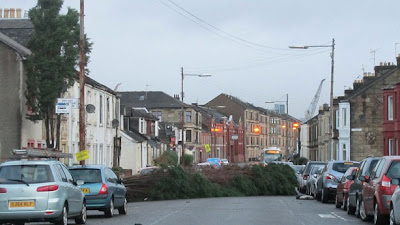 Leonardo noticed that when trees branch, smaller branches have a precise, mathematical relationship to the branch from which they sprang. Many people have verified Leonardo's rule, as it's known, but no one had a good explanation for it. 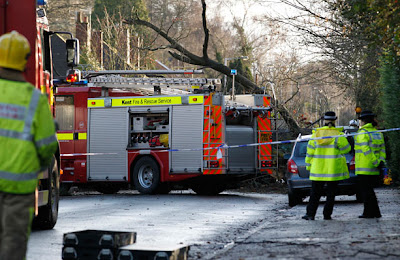 French physicist Christophe Eloy wasn't particularly interested in trees, but he does specialize in understanding how air flows around objects — objects like airplane wings and such. So he decided to see whether he could solve the mystery of the branching trees.

"I just did it because it was a nice problem, but I think there are some implications for real-life applications," Eloy says. 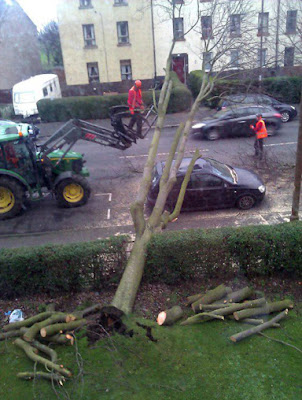 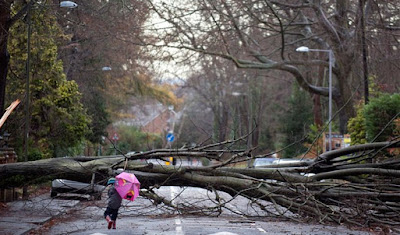 'A Very Nice Challenge'
While Eloy was on a break from his day job as an assistant professor of physics at the University of Provence, he started playing around with some calculations, and he came across something rather amazing. From an engineering point of view, if you wanted to design a tree that was best able to withstand high winds, it would branch according to Leonardo's rule. 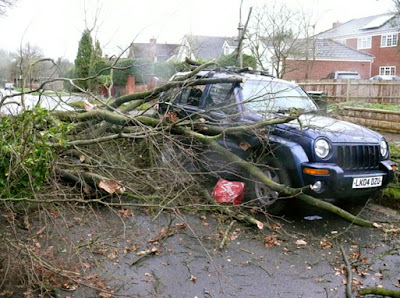 Apparently, trees have figured out the sophisticated engineering principles all on their own.
Of course, engineers have known for a long time that they have to think about wind when they're building things.

"The most famous example for a man-made structure that was built with wind load considerations in mind is the Eiffel Tower," says Pedro Reis, a professor of engineering at the Massachusetts Institute of Technology. Reis says the Eiffel Tower's shape was based not just on aesthetics but on those design principles trees know all about. He says Eloy's work could be useful for designing branch structures like those in complex antennas. 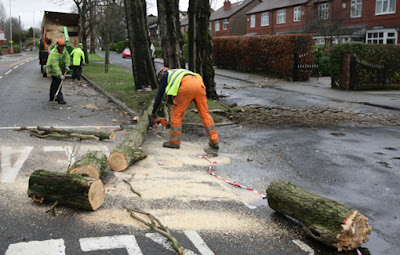 But that's a bonus. Reis says he understands exactly what Eloy means when he says he didn't tackle the conundrum of Leonardo's rule because he expected it to have practical implications. 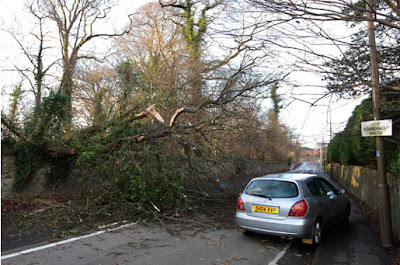 "When you see something like that that hasn't been explored fully, it's a very nice challenge for a scientist. So I'm not surprised that Christophe took that onboard and did such an elegant study," he says.
Another consequence to be expected when vast numbers of trees are dying from ozone is an increase in wildfires, and that is certainly exactly what is happening in many places around the world, most recently terrible conflagrations in Chile: 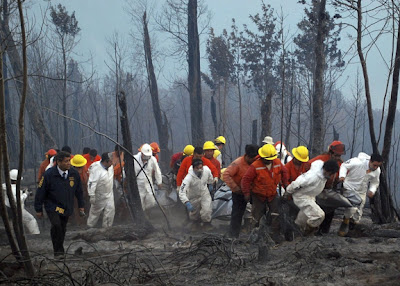 And even in the winter in Montana! 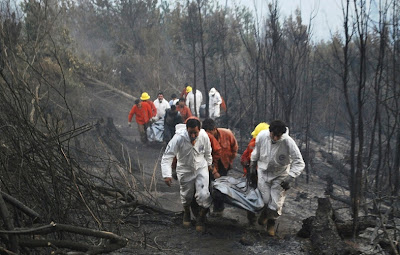 Meanwhile, the background level of tropospheric ozone continues to climb.  According to this article, California's central valley hit record highs for air pollution last month, despite efforts to curb emissions.

"This is the time of year when residents who often live with the nation's worst pollution often can draw a breath of fresh air. But this winter has not been kind to people who want to play outside in California's Central Valley.

"A dry December and January has stagnated air across California, but nowhere is the situation more serious than between Modesto and Bakersfield, where nearly every day dirty air has exceeded federal health standards."
"The southern San Joaquin half of the valley stretches 200 miles from Stockton to Bakersfield and is home to 4 million people. It traditionally records the highest level of particulate matter and ozone pollution in the United States and has a rate of asthma three times the national average, according to the American Lung Association."
What is so pathetic is that people are being told to stay indoors and avoid exercise, since heavier breathing pulls in more pollutants to the lungs, leading to asthma and heart attacks.  Of course, trees can't go inside so they are stuck absorbing the toxins our industrial civilization produces, which probably has something to do with why they are dying prematurely.  But hey, just because I am an ozonista that doesn't completely preclude me from recognizing the dire threats from climate change.  In comments on the last post Catman brought up James Lovelock and his Gaia theory, inspiring me to look around on youtube.
Of course, Lovelock is quite famous so there are loads of videos of his lectures and interviews about his books, but what was really fascinating is that in the process I came across videos from another proponent of the notion that Earth possesses every facet of a living system, which we have thrown irreversibly out of whack - Dr. Alder Stone Fuller.  I felt completely disgraced that already in 2008 - when I was just starting to think about climate - he was explaining that we had passed crucial tipping points, and predicting that we face abrupt and cataclysmic change.  Trying to track him down I came across one website for the Global Warming Crisis Council, which was established in 2003 by a nonprofit called Culture Change, itself founded in 1988 - and already predicting the very catastrophic consequences that have begun in earnest to occur!  Here's another one for the archives, their newsletter from 2006.  I feel so stupid looking back - where was I?  How could I have been such a COD?
It was a little difficult to find out where Dr. Fuller is now, because he has recently moved from Oregon, where he lived and taught when those videos were produced.  I was getting worried that he had either died or just got discouraged and disgusted and stopped teaching - but I finally found a radio interview with him from last October...and learned there of his current website from whence he proffers solace to those of us in "ecoshock" - and advice to those communities seeking to build resilience (not mine, unfortunately!).  So without further ado, following are the first videos (three parts), followed by the radio interview.  You might want to settle in with a drink and a snack.

Wait!  Before the radio interview with Dr. Fuller, here's James Lovelock, a very wise man indeed (with a terrific sense of humor too!) who explains neatly how we have so destabilized our climate that we can most likely expect our planet to become uninhabitable in almost all of the places we now occupy.

Following is the interview with Dr. Fuller on Radio Ecoshock from last October, which I can't recommend highly enough, especially for the readings from Dianne Dumanoski.  My next step is to get her book.  Unfortunately, I can only figure out how to embed the first part of the program, below - you'll have to go to their website for the second part and click on the player (top right of the page) to hear the rest.  And since Dr. Fuller mentions global dimming as artificially masking the true amount of warming from our greenhouse gas contibutions, I've also at the very end embedded the documentary of the same title.  I had already posted it about a year ago, but back then it was only available in short chunks from youtube.  Now, the entire thing is up, uninterrupted.


Here's the radio description: "We've been shown the sloping graphs of rising heat and seas by the IPCC. But scientists studying deep time find otherwise. The climate tends to shift relatively rapidly, as much as 4 degrees C in a decade or less. Dr. Alder Stone Fuller in a two-part interview with Alex Smith of Radio Ecoshock. He teaches Gaia 101 and encourages "adaptability" and "shock-proofing" vital systems like water and food, to be ready for big climate change. With readings by Dianne Dumanoski, author of "The End of the Long Summer". From Radio Ecoshock show 111005 Part 1 24 min, Part 2 17 minutes."