"On September 11, 2001, debris from the collapsing World Trade Center towers knocked over a giant sycamore tree that had stood for nearly a century in the churchyard of St. Paul's Chapel at Broadway and Fulton Street. When the dust settled, the uprooted tree was found lying on a narrow path in the yard. It had fallen in a way that none of the historic tombstones around it were disturbed, and none of the wreckage reached the chapel.
Sculptor Steve Tobin heard the story of the sycamore and envisioned using its roots as the base for a bronze sculpture. Installed on the fourth anniversary of the terrorist attacks, the Trinity Root is a metaphor for our connectedness and our strength."
I started out this morning reading more about the ominous methane release, which has recently been haunting my thoughts - in particular today about the scientists who are so reluctant to admit that there may be a disastrous threat developing in the Arctic...because this is so reminiscent of their refusal to acknowledge that trees are dying from exposure to tropospheric ozone.  They should though, because aside from the indescribable horror that implies in terms of food and and irreplaceable beautiful habitat, losing forests means we will lose an essential carbon sink, which will in turn lead to accelerated warming in short order.  It's already leading to a spike in the accumulation of CO2 in the atmosphere, which came as quite a surprise, since emissions were expected to be reduced due to the economic recession. 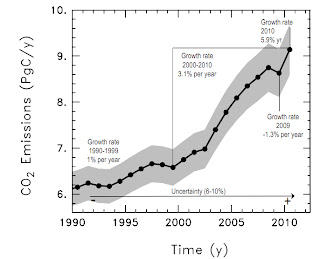 In the course of following links on that topic, I came across a plea from a filmmaker, Gary Houser, to a certain narcissistic charlatan who masquerades on a very grand stage as a neutral journalist.  Houser is working on a documentary about a few courageous scientists who are undertaking to report on the conditions in the frigid north, brave souls who have been smeared as "alarmist" for their efforts.  His comments were so reminiscent of my own earlier and futile appeals to the pompous Revkin and various climate scientists about trees dying from ozone, that I decided to look up his film company.  Imagine how I recoiled in astonished horror, almost as though I had been stung by a scorpion, to find that he is also engaged in another film project called...wait for it..."The Trees"!   My heart skipped a beat but as I looked further I saw that it's not about pollution, but rather a documentary following the process of designing and installing the World Trade Center 9/11 memorial - with an emphasis on the nurturing and planting of the trees.  I had no idea what an integral, actually pivotal role they are meant to assume in the concept.  I can think of none better.
This discovery initiated a long morning of searching for images of the memorial, which inevitably brought on a lot of sad memories about that calamitous event, that ruptured the lassitude of American complacence, which is still impossible to assimilate.  The trailer about the trees is embedded below, which is followed by a collection of photos of the installation after the dedication last September.  Much as I can think of no better tribute, as an ozonista I seriously doubt they will be the symbol of survival that was intended.  Leaves were falling early, and then turned brown by mid-October, which is about a month early for White Swamp Oaks.  Premature senescence is a classic symptom of exposure to ozone.

The photos from last fall are interspersed with portions of an article from the Houston Chronicle, written in September, 2010.  The paper interviewed Tom Cox, whose company, Environmental Design, was hired to locate and install the trees.
"Planners and survivors had decided they wanted acres of trees to signify rebirth at Ground Zero. All would come from New York, Pennsylvania and the D.C. area, where the victims’ lives were lost. Sweet gums and swamp white oaks were chosen because they are long-lived, with a high survivability rate, and can weather the extreme conditions of urban New York. The first trick was finding enough good ones. Tree farms and nurseries could provide only so many. Cox recalled driving the roads of Maryland; when he would see a candidate in someone’s yard, he would pull over and ask the homeowners if they’d be willing to sell or donate."
"The response was overwhelming, and half of the sweet gums were harvested that way. By spring 2007, he had 600 trees on a 15-acre site in Millstone Township, N.J., 35 miles from Ground Zero. Since then, they have been tended in individual wooden boxes, each 10 feet square and 5 feet deep, handmade by Amish craftsmen. There are monitors for soil moisture and nitrogen levels, with computers directing water and fertilizer where needed. A webcam keeps watch around the clock, and the trees are insulated when the weather turns cold."

"So far, Cox said, just one tree has been lost — to a lightning strike. The others have grown to a uniform height of 30 feet and have been pruned to 12 feet so that, when all are in place, they will provide a solid canopy in the memorial area and over the nearby Port Authority transit hub. On Aug. 28, the first 16 swamp white oaks were brought in on semi-truck trailers and craned into planting troughs at street level, where the trees will form a roof garden over an underground museum."
A more recent article from last September 2011, in the New Jersey Star Ledger, has an update from Wayne Dubin, VP of Bartlett Nurseries, where trees are held until transplantation.  For the record, he told me on the phone that he has no concerns about atmospheric pollution, and out of about 500 trees, (225 planted so far, 275 to go) they have had a 100% survival rate.  He described the sophisticated, intense care dedicated to monitoring every aspect of their health (except ozone).  This is from the Ledger article: 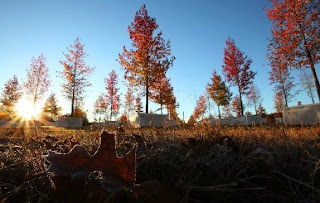 "The original design called for a mix of swamp white oaks and sweet gum trees, but the blazing red fall color of the sweet gums was thought by some to be too jarring. Instead, the memorial forest will present a uniform and more muted canopy of golden yellow every autumn.
Swamp white oaks were chosen for their durability — they are “tough as nails,” in Dubin’s words and can live for as much as 300 to 350 years."
Sweet gum trees too bright?  I guess, that could reflect the intense controversy that has surrounded the planning of the memorial - or maybe it's because in Bartlett's library of their own research program is a paper titled, "Ozone Injury to Landscape Plants" which has the usual descriptions of damage so familiar at Wit's End from other sources:  "Higher exposures result in red or purplish stippling on the upper leaf surface...Very severe symptoms include necrotic  (brown or white) stippling, spots or blotches on sides of the leaf." and "Diagnosis of ozone injury is based solely on visible symptoms of damage.  If leaf stippling is present on susceptible species, inspect indicator plants (Table 2) for symptoms.  If symptoms are present on indicator plants, ozone is the likely causal agent." and "There are no specific  treatments available for ozone damage." and "In areas of  chronically high ozone levels consider planting resistant species."

So, here's Table One where sure enough, oaks are considered tolerant:

There are several other brief papers at the Bartlett website describing ozone injury, such as this:  "White pine is also one of the tree species most sensitive to air pollution damage.  Low levels of sulfur dioxide, ozone, and fluorides will lead to needle chlorosis and tip-burn.  The older needles will often fall off prematurely"..."White pine decline in landscapes has been the subject of several recent research projects."...and also such cheery prognosis as..."Remedies for needles and leaves already damaged by pollution is very simple - there is none!"
If you've got 40 seconds, you can watch a youtube video pan of the trees with brown leaves taken on October 13, 2011...or skip it, because much more enchanting is a vimeo of Norwegian fjords.  I'm quite certain the filmmaker doesn't realize that it's a tell-tale indication of decline that so many trees are practically bare of leaves in August, but it almost doesn't matter - the waterfalls and moss and mountains and clouds are that sublime.  I can almost forget that the world is dying.