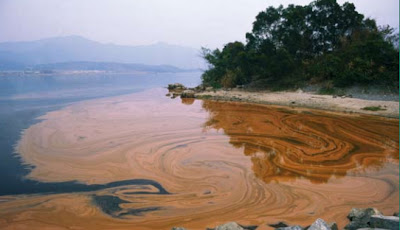 According to a review issued jointly by the UN Environment Programme and Woods Hole Research Center, "Reactive Nitrogen in the Environment", pollution from burning fuels, sewage, and excessive fertilization in industrial agriculture triggers algal blooms in lakes, rivers and coastal waters, which take oxygen out of the water resulting in hypoxic or anoxic regions.  This loss of oxygen causes other forms of life to expire, and then again, some of those algal blooms are toxic, like the red tide in the picture above, poisoning whatever eats contaminated seafood.  Like those birds on the beach in Moss Landing. 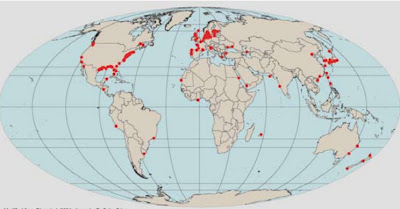 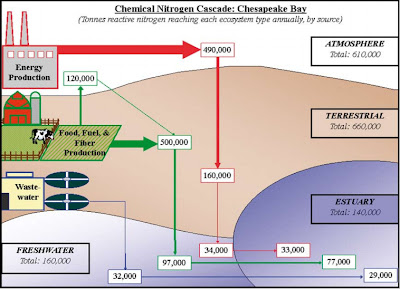 "Diagram of the biogeochemical nitrogen cascade, showing the major fluxes of reactive nitrogen among atmospheric, terrestrial, freshwater and estuarine systems in the Chesapeake Bay watershed. These inputs of reactive N to the Bay are attributed to three source types: energy production, food and fiber production, and wastewater. Arrow width varies according to flux size.  Adapted from Moomaw and Birch, 2005."  This model is applicable to other estuaries as well.

Thanks to the Coming Crisis for posting the newscast
Posted by Gail Zawacki at 2:30 PM