Where are the Ducks?

This post will veer just slightly off the trees-dying-from-ozone purpose of this blog, because the methane issue is beyond radically terrifying.  Emissions in the Arctic have increased by a third in just five years, according to recent studies, astonishing researchers.  Here are three graphs depicting the accelerating rate of release, starting in 2002. 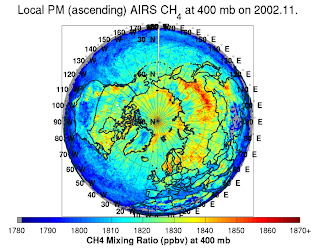 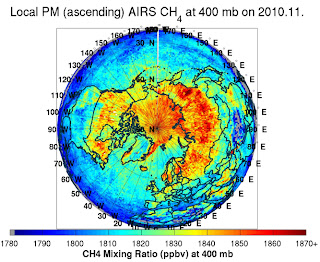 I hope you sit through the commercial to watch this video about Siberia.  Notice the dying trees - okay, I understand the permafrost is melting, undermining the root systems.  But what is even more fascinating is the insanity of this Russian scientist's proposed solution.  He uses an antique truck, that practically is a mammoth, except it's spewing no doubt excessive amounts of pollution from the tailpipe, to knock down "heat-trapping" trees and thus return the tundra to permafrost with grazing animals.  Even assuming this is plausible, let alone on the huge scale that would be required (and forgetting the methane the animals release!) it won't be able to keep up with the rest of industrial civilization, which is emitting ever more greenhouse gases at an accelerating rate.  It's just nuts!
Aside from permitting Dr. Zimoff the comfort of feeling heroic for averting catastrophe, the segment about his "Pleistocene Park" is meant to make viewers feel like there is nothing to worry about, the experts will come up with a solution for the Anthropocene...the current epoch, in which humans are shaping the fate of the planet, and not for the better.  Inexplicably (and if I receive an explanation, I'll update this post *updated below!), Adam Wolf, a biologist of Princeton, appears to agree that it is possible "stop the bomb" in this manner "with proper investment".  I personally don't see how this can be any more than a flight of fancy, but maybe that's just me.

It seems that such magical thinking is rampant, as most people find it impossible to confront the converging catastrophes that are assembling, implacable, on the menacingly near horizon.  A wildlife biologist wrote an oped to the clowns and morons presidential candidates who are campaigning in the New Hampshire primary, titled "Silent Swing".  A lament over warmer winters in New Hampshire, he points out that a warming climate lacking the usual ice and snow has serious regional economic impacts - for instance by damaging habitat and disrupting migration, reducing the numbers of wildlife that hunters like to shoot.  He asks, "Where are the ducks?", a worthy question, but then appears to see no disconnect in the following:

"Climate change also poses a threat New Hampshire’s economic health many other ways. The skiing industry directly employs 17,000 people in New Hampshire and pumps $650 million dollars a year into our economy, a revenue stream that’s critically threatened by warmer winters. And if ski resorts are forced to make more snow, it will cost plenty to cover one acre of ski trails with one foot of snow that takes up to 180,000 gallons of water to be pumped. Along with the ski industry is the snowmobile industry which contributes another $1.2 billion dollars to this state’s economy, according to a 2004 UNH study. Snowmobiling supports thousands of jobs as well, especially in the Great North Woods."


Does he imagine that tourists driving or flying to ski resorts, which produce fake snow, or recreational snowmobiling can be considered sustainable, irregardless of the financial cost?


This reminds me of annoying stories I see from time to time on the front page of yahoo from their travel section, exhorting people to do things such as, drive around New England to look at the fall foliage (which is lately going straight from dull green to shriveled brown thanks in large measure to auto emissions) and even more ludicrous, to visit tropical beaches and islands before they are inundated by sea level rise...thanks in no small part to airplane emissions!  What is wrong with people??

Speaking of disconnects, middle daughter set up speakers for my computer over the holiday, so now I can actually hear downloaded movies...thanks Sophie!!  So last night I watched "Margin Call",  which is about the beginnings of the 2008 financial meltdown.  It kind of interested me because the son of my neighbor (who was Senior VP of Merrill Lynch and has since relocated) wrote and directed the film.

It is, not too surprisingly, a transparent attempt to humanize the despicable hedge-fund managers, brokers and risk assessment managers that gleefully and remorselessly plundered the wealth of the middle and lower classes, just as long as they possibly could.  It's reasonably entertaining but there are more than a few pity-party scenes to be endured.  One in particular unwittingly exemplifies a mindset that is irremediably stupid and short-sighted.  Kevin Spacey, who portrays an executive who was fired just as he was discovering how insolvent his financial institution had become - thanks to deregulation and a conspicuous lack of morality - sits on the front step of his mansion, moaning about how he had started life as an engineer, and as such had once built a bridge.  He nostalgically recites one statistic after another that he has clearly memorized and reviewed many times, measuring in miles and hours, days and weeks how much distance and time he had spared the lowly little people, from commuting, by constructing that convenient bridge.

Yet, in all the calculations he never once speculated as to how much more driving, pollution, CO2 emissions, and suburban sprawl the existence of that new bridge may have encouraged, or how many resources were used in building it, or wildlife habitat destroyed.  Nope.  Just, poor me...if only I had stayed a noble engineer, and not decided to be a rapacious, grotesquely overcompensated, and now disgraced banker.  Had he engineered a high-speed train for public transport I would have felt a bit more sympathy.

Anyway, speaking of bridges, here is a video sent to me by my friend in Quebec, Michele.  I lost track of how many times the narrater patronizingly called the Pygmies "little" but if you can try to ignore that and watch them build their bridge, it's quite exciting.


Dear Mr. Wolf,
I saw this video, and I have a few questions about the statement you made, in apparent response to this question:
"Can this experiment be scaled up to stop the bomb?" [experiment being mowing down trees and bringing in horses and reindeer]
Your answer, "Is is possible with proper investment?  Absolutely."
Question 1:  Do you actually think that it could possibly be replicated on the scale that would be required to make any difference?

Sure. The whole premise is that the system was self sustaining (see attached AmNat paper).  The longer interview would have me comparing the pleistocene park approach of bio-geoengineering with proposed geoengineering strategies, such as injecting sulfate aerosols into the upper atmosphere, fertilizing the sea, etc. While you might complain that those geoengineering strategies might have unforseen negative consequences (I would), you could not argue that they require civilization to do those strategies indefinitely. Once you stop, the benefits go away. What is different about the pleistocene park idea is that it is literally self-perpetuating. At least, that is the hypothesis that Sergei is testing.  Obviously population growth of animals, especially large animals, is slow, and the base population now is miniscule. But if the question is whether it's possible to manage animal populations so that they become large, it is absolutely possible.

Question 2.  And even if it could be, how would that have any lasting impact on methane release reductions, when the rest of industrial civilization continues to accelerate emissions of greenhouse gases?

I'm a bit agnostic on methane per se. Yes it has a higher global warming potential, but its lifetime in the atmosphere is relatively brief, so ultimately it gets oxidized to CO2, and the long residence time of CO2 in the atmosphere I believe is the larger worry.  This is a way of saying that it's not just the methane from soil carbon decomposition under from lakes, but the soil carbon decomposition of the entire landscape.  No matter how much CO2 ends up in the atmosphere, much of the yedoma deposits at issue will be above the arctic circle. So regardless of global temperatures, it will be cold up north for a large part of the year. The goal is to keep the permafrost cold even in a warming summer atmosphere. This can be accomplished by altering the albedo of the surface from "dark" trees to "light" snow & grass during transitional seasons (Doughty Wolf GRL paper), and by trampling snow by hoofs in the winter, which increases the thermal conductivity of the snow in the winter and allows the permafrost to equilibrate with the (much colder) air temperature. If the temperature can be kept below a certain threshold, you could hope that the runaway decomposition effect of Khvorostyannov does not become active. 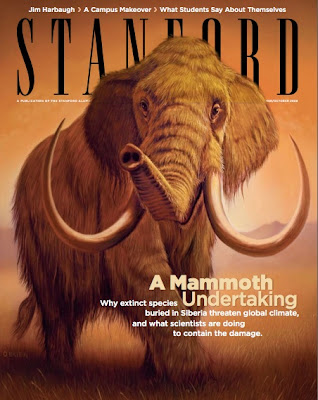 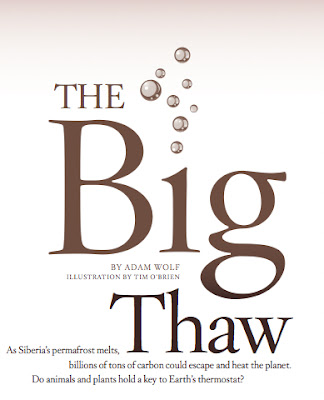