Last week, 33 of 99 beached whales were shot in New Zealand after they returned from the sea, and over 70 dolphins have died in similar events on the other side of the world, on Cape Cod.  When there is no other salvation, Tibetan monks are known to set themselves on fire.  The Arab Spring began when Mohamed Bouazizi, a despairing Tunisian street-vendor, followed their example.

Rumor has it that even squirrels will protest when all else fails. 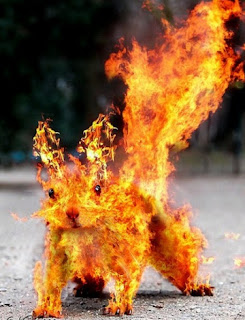 Given the unremitting, cumulative exposure to toxic gases trees have been forced to endure since humans started emitting massive amounts of ozone precursors, it should come as no surprise then, that they have no recourse other than to burn in fury. 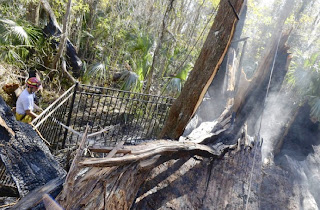 Longwood, Fla.—
— One of the world's oldest cypress trees was destroyed in a mysterious fire Monday.

A state Division of Forestry investigator listed the cause as "undetermined" but ruled out arson, said Cliff Frazier, an agency spokesman.

Firefighters responded about 5:50 a.m. to the blaze, which was burning inside the 3,500-year-old tree named the Senator.

About 7:45 a.m., a 20-foot section of the treetop fell off, Seminole County Fire Rescue spokesman Steve Wright said. By 8:15 a.m., more of the tree had collapsed.

The tree, which was hollow, burned for several hours from the inside out — almost like a chimney, Wright said.

The tree was estimated to be 165 feet tall before a hurricane took off the top in 1925, according to research conducted by county historians.

Once the fire was out, about 20 to 25 feet of the tree was still standing, said Mike Martin of the Division of Forestry.

From Mother Nature Network:  "The Senator was believed to be one of the 10 oldest trees in the world and probably the oldest in the United States. It measured 17.5 feet in diameter and 425 inches in circumference, according to the Tampa Bay Times. It got its name from Florida state Sen. Moses Overstreet, who donated the acreage that formed Big Tree Park to Seminole County. The tree and the park received hundreds of thousands of visitors a year." 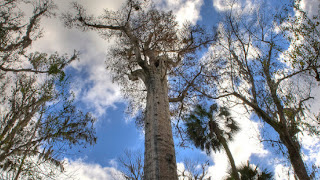 Following are excerpts of a eulogy for The Senator, from a blog, Travels with Tim:
Experts say The Senator was only a sprout when Stonehenge was being erected, iron was being created and China gave birth to one of the earliest civilizations with a recorded history. Only four other trees on earth besides The Senator were alive at that time. For those who care about such things, the loss of The Senator is devastating.
Cause of the fire is still being investigated. Theories include premeditated murder (arson), a lightning strike that occurred several weeks ago and–the most intriguing of all–spontaneous combustion.
The investigation was quickly taken over by the Division of Forestry whose investigator blamed lightning and apparently concluded that the greatest heat was in the crown of the tree. His theory was that the strike occurred several weeks ago and the tree has been quietly smoldering before breaking out into a full-blown blaze. 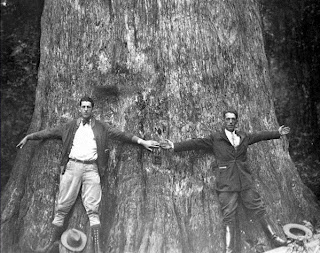 This would mean that for several weeks no visitor or anyone in the area would have noticed any smell of smoke, a questionable scenario.
The lightning protection company name is prominently displayed at the main overlook of The Senator.  Blaming a lightning strike as the cause leans towards libel since it implies (clearly names?) the company as being responsible for The Senator’s death. 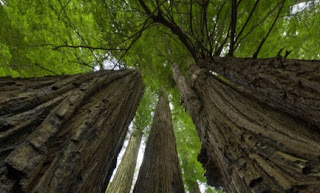 The spontaneous combustion theory theorizes that the few ancient limbs on the tree because were waving back and forth, creating friction, and thus the fire. Since the limbs were stubs and there was no great wind storm that night, an alien laser might make more sense.
Regardless of the cause, the fall of The Senator is a loss to everyone, anywhere, who cares about protecting the world’s most ancient nature.
Posted by Gail Zawacki at 9:25 AM