I was already preparing to go back to Zuccotti Square when our revolutionary email circle was alerted to an article in Gawker, with the above title, which referred to a facebook counter demonstration threatened for this afternoon, at Wall Street and Broad.  The comic possibilities were immediately apparent, and irresistible, so I hastily finished packing and headed for the city. 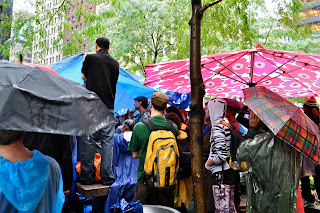 When I arrived, the protesters were having a meeting under a hand-held tarp, using the "human mike" system as no loudspeakers or bullhorns are allowed by the police.  You can watch this amazing effort on their livestream quite often, just click here.  (You can also, by the way, watch it without advertisements, since the advertisers withdrew due to "discomfort" with the content...so livestream is broadcasting it for free!  How's that for justice!?) 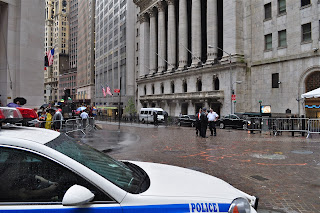 Anyway, I saw no evidence of a counter-demonstration at the designated hour, but the police presence is suffocating.  They have barricaded the area, and I think for every protester there is at least one officer, with gaggles of the ominous plastic zip-lock handcuffs dangling from their belts.  In that sense, OccupyWallStreet is quite a success.  They (can I say we?) have definitely disrupted business as usual. 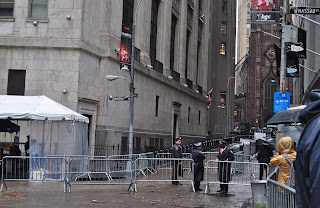 Police were arrayed on high, at the top of the steps when I arrived, filming and photographing.  Shortly before 4 however, they moved down to street level, and started telling anyone who stopped - tourists taking pictures - to keep moving. 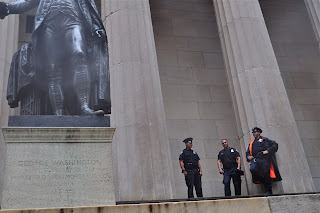 Either the police have too much time on their hands and are fiddling around on facebook, OR they're reading our emails, OR there is a rat in the bunch, because they KNEW something was planned. 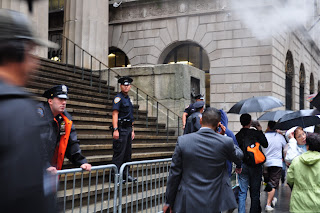 I went back to the park just in time to find a sign from the pile under a sheet of plastic that happens to match my sentiments exactly, and join in on the twice daily march past the Stock Market.  The expressions on the faces of people leaving work as we chanted ran the gamut from approval to quizzical to horror...to pure fear.  BANKS GOT BAILED OUT, WE GOT SOLD OUT! 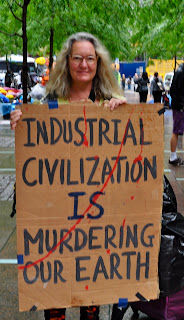 We did in fact have a little excitement regarding the Illiterati, but I have limited time to work on the computer so that's it for now.
Posted by Gail Zawacki at 6:42 PM