The Gallantry of A Futile Gesture

Irene is still making life miserable for those bullet dodgers who were targets of Nature's wrath this time.  I had thought Wit's End was unscathed but that's because I huddled in the house all the day after, avoiding the continuing turbulence.  Thus I didn't discover until the following brilliantly sunny morning that a large honey locust, one of a long row along the road, had fallen straight across the entry to the driveway, blocking access.  SPLAAAT! 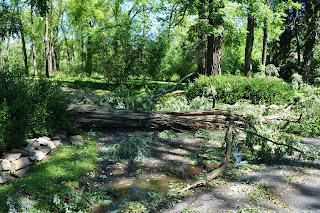 This discovery came amidst ongoing perplexity in the media as to why there was so much hysteria in advance of this storm when in fact it turned out - according to their rather obviously crestfallen announcements - that the winds were much less than expected and in fact shouldn't have caused widespread problems...but then again, there were huge numbers of trees down, and swathes of power customers are still without electricity for that reason. 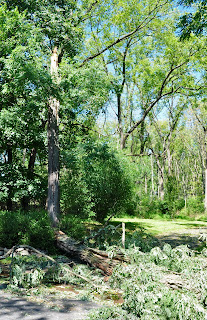 Anybody who has read the Basic Premise, linked to above, knows that the reason I write this blog is that I have come to believe that rising levels of background tropospheric ozone are killing trees, primarily by interfering with the ability of their leaves to photosynthesize.  That is why their leaves typically look like this maple, or worse: 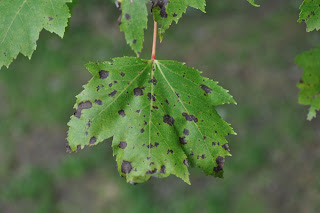 And that is why their interiors become weakened and then rot, more susceptible to insects, fungus and disease, causing them to fall over more frequently, like this one I saw in the aftermath of Irene. 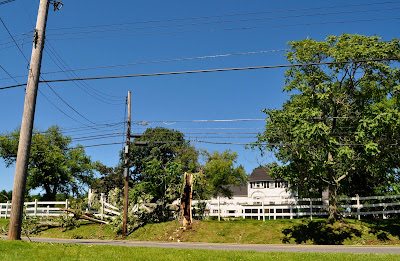 I did a little comparison with past hurricanes and not surprisingly found that despite less wind, significantly more damage from trees occurred with Irene than in has been usual.
This report, "Hurricane Irene Blamed for at least 40 Deaths," attributes 12 deaths directly to falling trees or branches - although that doesn't preclude that others might be proximately related - for instance, if someone is electrocuted by downed power lines, it isn't mentioned whether those lines were downed by a falling tree; similarly in a situation where a car accident from traffic lights not working was from lines broken by branches. 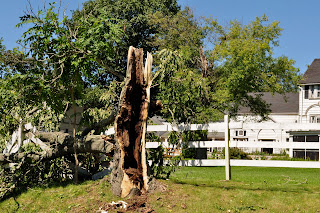 According to statistics at the Center for Disease Control, which monitors causes of deaths, out of 52 total deaths from Hurricane Floyd in South Carolina, not a single one resulted directly from a tree or branch.
Gloria on the other hand, did have a total of 8 dead from trees in September, 1985 - but also much higher winds, up to 115 miles per hour on Long Island. 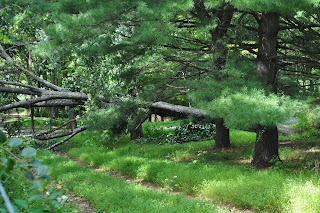 In this story, titled "Millions Wait for Power to Come Back On After Irene":
"...Gilbert, with Connecticut Power, said it took two weeks to restore power after Hurricane Gloria knocked out service to 477,000 customers in 1985.
"And this definitely blows those numbers away," she said." 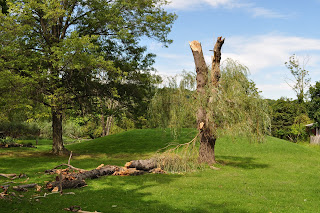 This is exactly the sort of trend to be expected when dying trees become dangerous even in ordinary storm winds. 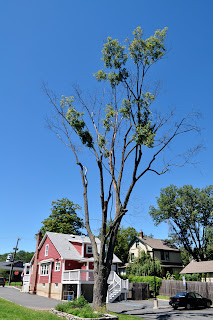 I went to lunch in this little restaurant with first daughter and said that it was odd this obviously dying tree was still standing and she pointed out rather acerbically that since it has hardly any leaves it offers little wind resistance.  This is true for many trees.  They are dying so fast there isn't enough money or crews to remove them, like this huge old birch that was also left standing. 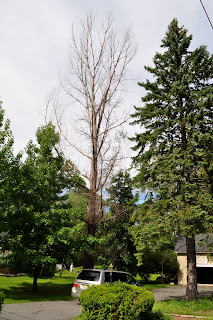 Here another view of a hillside, this one in Peapack, where a portion of trees are turning fall color in August. 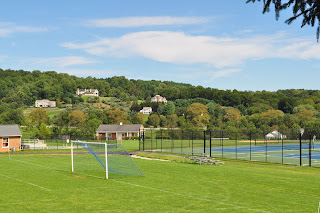 And this is the funniest scene I came across, a crushed Mercedes. 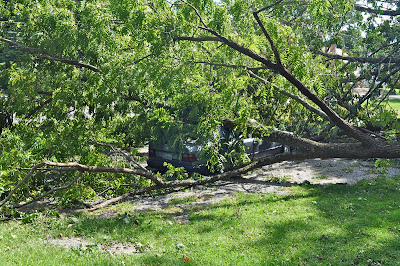 Moving on to Washington DC, where my fellow conspirators in crime snagged a choice parking spot under dying trees, next to a church where our arrest training was held on Tuesday night. 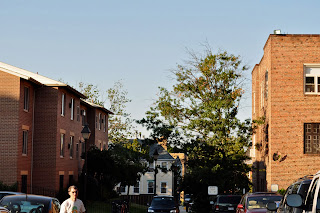 Dozens of earnest people from all over the country got to know each other as part of the orientation. 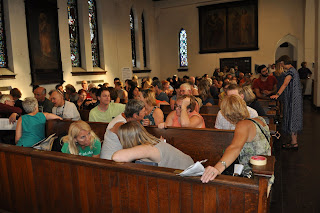 Our legal counsel worked in intent concentration through the hubbub of instructions, role playing, and dinner. 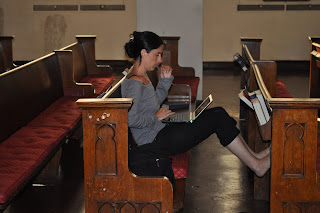 There is great consternation in the environmental community that the protests at the White House - hundreds of peaceful arrests in total, continuing day after day - is garnering almost no attention in the press.  This is compared in many dismayed quarters to the disproportionate coverage it is assumed that similar acts of civil disobedience would garner were it tea partiers instead of climate change activists who had organized such an unprecedented action - and despite the participation of James Hansen, head of NASA's Goddard Space Institute. 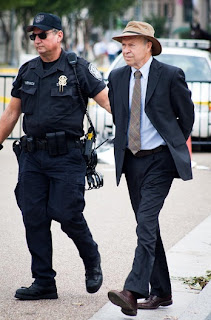 Even worse in my opinion is that since the arrests first began, the administration has now sent three very clear signals that the decision has been made to approve the pipeline (as if it were ever in any doubt).  First, Hillary Clinton's State Department released a statement saying that no significant negative environmental impacts are anticipated.  Next, the President's press secretary, when asked of Obama's reaction, said he hadn't even told him about the protests.  And the latest outrage is Secretary Chu's interview, in which he claims, again, that the environmental concerns are being addressed and oh, wouldn't it be nice to get our oil from Canada instead of unstable, unfriendly, far away nations? 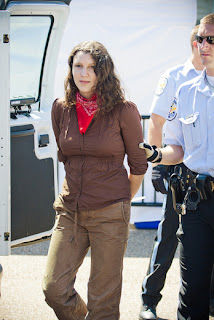 This young lady of tree-sitting fame, known as Squirrel, joined in with many fellow Appalachians who are  in revolt over the unimaginably horrific travesty that is mountain top removal. 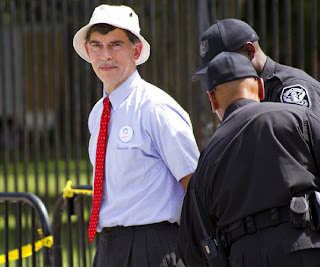 These are my fellow travelers, Roger and Susan Shamel, being arrested.  Their apprehensions were mirrored by most participants I spoke to, everyone of which struggled with the decision.  It isn't an easy or simple choice to surrender your body and your freedom to the mercy of strangers, even in as controlled setting as the Tar Sands Action. 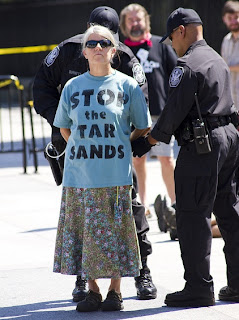 I want to express my admiration, respect and thanks to Bill McKibben and all the other organizers who have worked tirelessly to produce a smoothly executed and complicated feat, surely one of the most important acts of environmentalism you will never hear of. 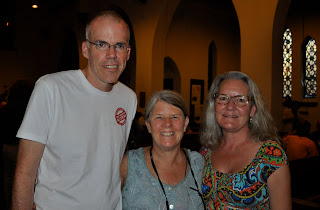 This pipeline will almost certainly be approved, as it appears our government has made the decision to, essentially, chop down the last tree on Earth, our big round Easter Island.  And so the question remains unresolved, what should good citizens do about it.  Asking nicely is a failed strategy.  I spoke to one charming young woman, Yiying, who is planning to be arrested today.  Unlike the usual group expressions of hope, solidarity, strength and so forth, she expressed as many did privately, a quieter desperation.
What I want to know is, Where's the Outrage?
Posted by Gail Zawacki at 8:20 AM