Yesterday I drove to Hoboken (*brave*) and then took the Path train to join the protest on the first day of Occupy Wall Street.  After walking several blocks in the wrong direction, with the help of the mounted police I finally found the gathering at Bowling Green.  Yes I wore my cupcake costume! 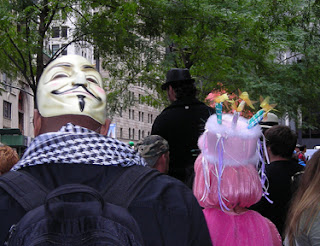 Lacy MacAuley, an activist with the Institute for Policy Studies, was speaking.  The acoustics weren't very good so it would be difficult to quote her exactly but she said something akin to: "...either we take this system down or Mother Nature will take it down!"...a sentiment with which I heartily agree.  You can follow her on twitter - she's quite a dynamo. 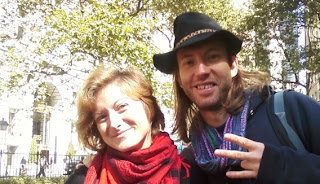 After that rally, the crowd began to march along the street, shouting out "Wall Street...Our Street!" 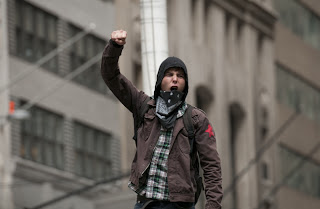 "They Got Bailed Out...We Got Sold Out!" 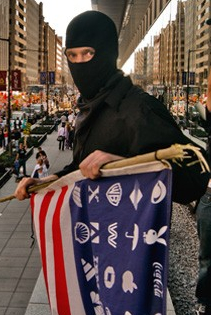 and the now-familiar "This is What Democracy Looks Like!" 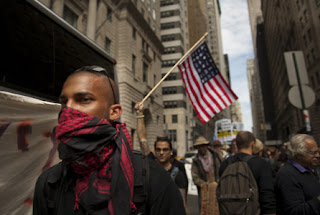 Anonymous was there, as well as a Wikileaks truck patrolling the vicinity.  Oh - and lots of police. 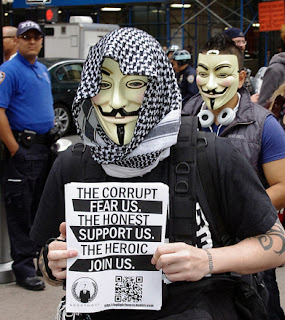 Somehow the docile procession was herded into a privately owned plaza, Zuccotti Park, where in adherence to a prior commitment to a "horizontal decision making structure", the participants formed discussion circles.  They took turns speaking about whatever was on their minds, including how to get back to the days of pre-agriculture.  The air smelled of marijuana and patchouli oil, and young girls handed out bouquets of flowers. 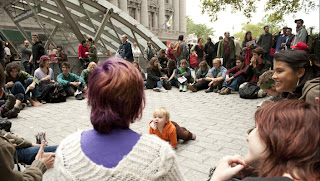 In spite of the focus of wrath on the obscene financial hijacking perpetrated by the banksters, and the not-incidental, growing disparity of income and wealth in America, it was gratifying to see that in fact there seems to be a distinct and increasing overlap between that theme and the concerns of the climate change/environmental movements.  The issues are inextricably connected and if there is ever to be an effective challenge to overturn the dark forces that are controlling our downward spiral to financial and ecological doom, it will require a unified opposition.  I don't know if this young lady went to the Tar Sands Action, where people were advised to write the number for legal services on their arms in case of arrest, but certainly others I spoke with had been. 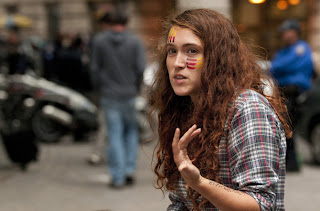 Members of Rain Forest Action scaled flagpoles to hoist a flag directing viewers to their "Dirty Money" website, which is really about coal...while veterans of the Tar Sands in Washington handed out fliers about the upcoming Moving Planet Rally on September 24. 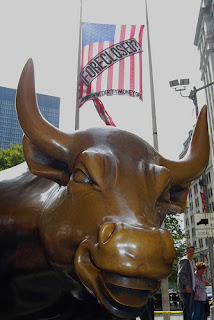 It was refreshing that I was not the only person who wanted to have some fun while shaking a proverbial fist at the greedy, evil corporate plutocracy hell bent on destroying not only the economy but causing mass extinctions from coral to butterflies. People were overwhelmingly complimentary...I lost count of how many told told me the cupcake is adorable, and wanted their picture taken with me (three who were having birthdays).  Roseanne Barr gave a feisty speech, proclaiming a new matriarchal society, and said she loved it - and so many people actually approached and asked for my handout for a change (and a few even seemed to be reading it) that I passed out all the leftovers from my ignominious expulsion from the Heartland Institute Conference last July. 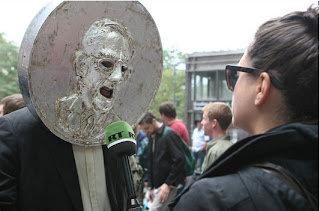 These are some of my fellows who were similarly theatrically inclined. 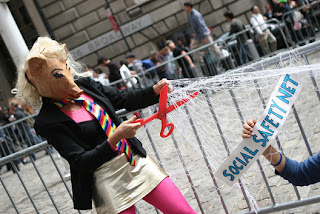 This menacing suited fellow with a rope around his neck wore black gloves and carried a briefcase. 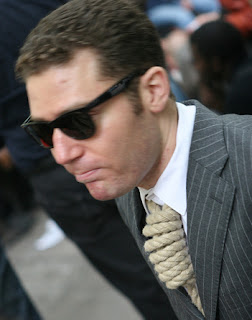 I left reluctantly at dusk.  Almost 300 hardy souls stayed the night, shivering no doubt in the wind.  Someone had donated a mountain of peanut butter jars. 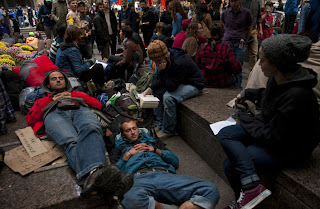 Today, I've been watching the live streaming video, which broadcast a prolonged debate first thing this morning, about whether to remove signs at the request of the mysterious entity known as "the property owner".  At first I was appalled they would even consider capitulating to this pseudo-benevolence - wimps! - but then one young lady took the mike and said, think of the trees, the signs are tearing at the them - we can take them down, carefully, and hold them up with our hands. 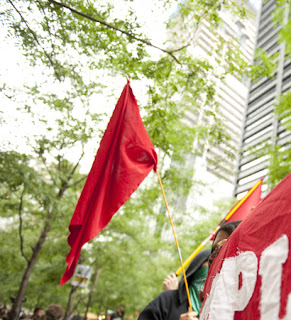 Ack!  Someone else...speaking for the trees.  I shouted at my laptop screen, wishing fervently I were still there.  Take care of the trees!  They are dying from ozone pollution!
It's doubtful that much about this will be seen on US teevee, so here is a report from Russia Today.
Photo credits here, here and here.
Posted by Gail Zawacki at 1:34 PM