After yesterday afternoon's misadventures (which I'll get to in a minute), I woke up this morning with a sense of foreboding and sure enough, I was not disappointed.  The news that Barack Obama ordered his own EPA to back down on tighter regulation of ozone rumbled through the protesters gathered in Lafayette Park, who had been chanting and singing Native American songs in support of today's batch of 160+ arrestees, prominent among them a contingent of First People through whose sovereign lands the proposed pipeline will illegally run.  All I want to know is, who's holding the gun to Obama's head (or maybe it's Michelle's)?  As one person in the crowd yelled furiously, he's already got one kid with asthma.  So he must be afraid of something worse than cancer.
Of course every environmentalist is indignantly threatening political retaliation.  Even before that news broke, Ralph Nader ambled casually into the park, at first unnoticed but shortly thereafter a media darling, swamped with bloggers and reporters.  "This," he said, "is a game changer", sweeping his arm to indicate the demonstration unfolding in front of the White House.  He announced with weary determination that indeed, he is working on an alternative ticket to challenge the President in the primary, to "hold his feet to the fire" - and expects to announce sometime next week who the challenger will be. 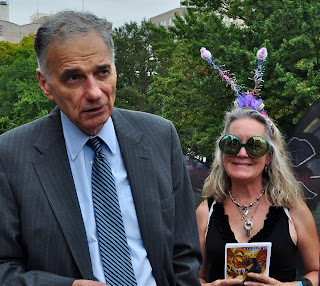 When asked what he thought the next step for the climate change protesters should be, he suggested we send a written invitation to Obama asking him to come out tomorrow when we have the final rally (and indeed Bill McKibben has since done so).  "If he can walk to the Chamber of Commerce like he did a few weeks ago with his security contingent, to appease their corporate concerns, he can come out and talk to you," he said.  But of course, that was before we heard about his complete and vile capitulation to industry over the ozone standards.

It's hard to evade the conclusion that the Tar Sands effort, to avert the XL pipeline, as all other past and future attempts, will not be compelling enough to dislodge our civilization's hurtling trajectory from its suicidal dash towards ecocide, chaperoned every step of the way by goons like the burly menace above, who has been surveying the opposition daily, from the Chamber of Commerce.  Of course I sort of knew that already, but nevertheless, since I was going to be in Washington anyway, I took it into my head to have a talk with Dr. Eva Pell, Under Secretary of Science at the Smithsonian Institute.  I made an appointment for 1 pm yesterday afternoon, at her offices in the historic Castle on the Mall, just a few bloody toe blisters away from the Tar Sands Action (ouch!).  Her previous career was built on many years of researching ozone's effects on vegetation. 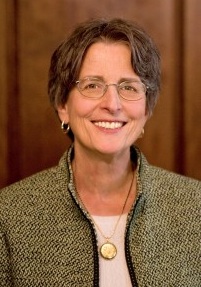 Along the way naturally I took photos of trees suffocating from air pollution, their branches spectacularly naked, the few remaining leaves shriveled and brown.  I had some wistful thought that perhaps Dr. Pell would be the scientist I have been seeking, one who isn't afraid to warn the world that the ecosystem is collapsing...and we are going to starve if we don't stop emitting toxic greenhouse gases, primarily reactive nitrogen that is the lurking precursor to ozone, in our insatiable desire for easy cheap energy. 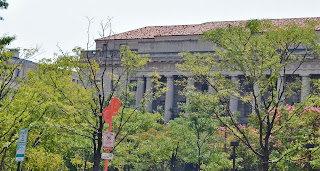 It didn't turn out so well.  I got the impression I managed to clumsily offend her from the outset, because after introducing myself I said that I had managed to find her at her new position at the Smithsonian from looking up her academic post at UPenn.  Little diamond daggers flashed from her eyes.  "I was NEVER at UPenn," she said in an icy voice - as though I had accused her of some heinous crime.  "Oh sorry," I amended, "I meant Penn State."  "Penn State," she agreed, still miffed and unmollified. 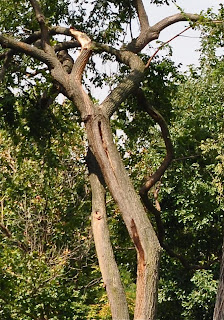 So with that sorry prelude I launched into my usual tirade about how all the trees are dying...and it must be from air pollution because no other explanation fits the empirical facts.  Her face was a perfect mask of veiled impatience as she politely allowed me to explain why I thought so, and then without a modicum of pause to actually think about what I had said, she launched into the standard catechism of orthodox excuses for trees to be imperiled - chief among them, insects, disease and fungus...notwithstanding the established research proving that plants weakened by air pollution are more vigorously attacked by such naturally occurring parasites, which I mentioned to no avail. 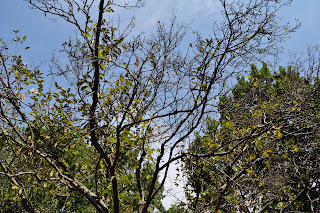 She did concede that one result of exposure to ozone is advanced aging - where, say, the leaves of a sycamore mature at 100 days instead of 120.  I didn't get a chance to ask her how "advanced aging" differs from "early dying". 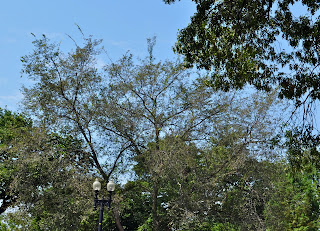 And then she mentioned that the Smithsonian has several research centers around the world that are detecting "shifts in biodiversity" which to my mind begs the question, aren't we really talking about some species GOING EXTINCT and being replaced by others - and of course, I also question how completely they are being replaced by others.  I see an awful lot of bare dirt these days even though I thought that the axiom, Nature abhors a Vacuum, was accurate. 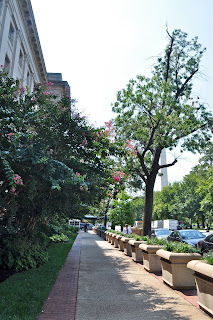 She noted that we have largely fixed the sulphur dioxide problem, and we can fix the other emissions with better coal plant scrubbers, motioning with her hands up and down as though she was rubbing a big power stack.  This runs counter to what I have read elsewhere, which is that the reason we were able to solve the SOx issue (including acid rain) is because, though expensive, it's relatively straightforward...but there is no such convenient technology to solve the NOx emissions - no solution other than switching to clean energy, and drastic conservation. 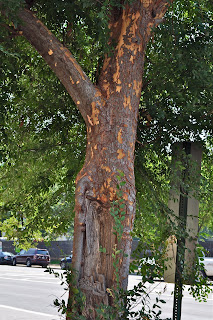 She asked me quizzically several times "Who are you?" and "Where are you from?"  It didn't occur to me until later that perhaps what she wanted to know was whether I had credentials, and with what organization or journal or university I was affiliated - and so I stupidly explained that I have a little (tiny) farm in New Jersey.  She wanted to know where in New Jersey and I tried to explain that Wit's End is located near an obscure village called Oldwick that is surrounded by horse country, and when she still wanted to know where exactly in the state, I said a bit north and west of Princeton - thinking everyone knows where Princeton is, right?  She replied with a frozen smile that she went to Rutgers at which point I really started floundering and wondered silently...is this a public university vs. Ivy League chip-on-the-shoulder sort of reaction? 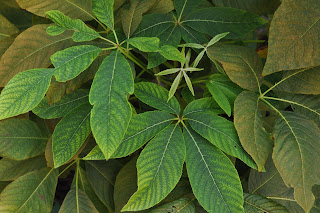 At that point I stood up and thanked her for her time.  As a last ditch plea I showed her some chlorotic leaves I had randomly picked from a bush on the walk mentioning that this sort of condition is now universal, and begged her to take an inventory as she goes about her routines in the city - but she insisted they were not exhibiting ozone damage but rather, nutrient deficiency from abiotic sources.  "I did spend a few years studying this so I think I might recognize the symptoms," she sniffed.

I knew the interview was over when she added with a pitying smile, "To say what the problem YOU are having with YOUR trees, I'd really have to see them."

This is always the final exit when all other avenues have expired.  It is MY problem, I have trees that are dying...no matter how I emphasize that ALL the trees EVERYWHERE are dying.  Which I guess is a polite way of saying, they think I am nuts. 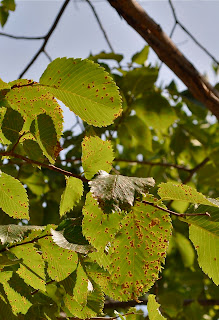 Altogether it was a dismal and discouraging experience, worse than when a climate activist is told by scientists, sorry NO! - there is no connection between all those tornadoes and global warming.  This is more like being told "What tornados?"  I suppose I should have learned better than to expect any scientist to risk their reputation with their colleagues - or even their position - by flagrantly warning what I so desperately want them to shout from the rooftops - if we don't stop burning fossil fuels and polluting the air, we face an existential threat.  First the trees, then starvation! 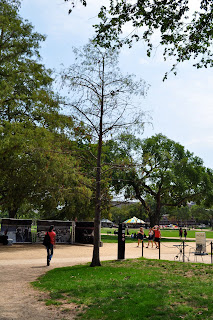 Dr. Pell spent her life studying trees, and for that painstaking scientific research I admire her.  But I am not convinced she loves them.  I do. 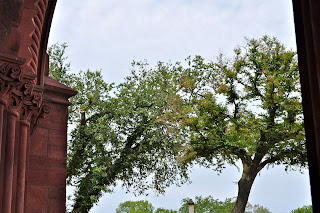 That is the view from the entry to Dr. Pell's offices at the Smithsonian Castle. 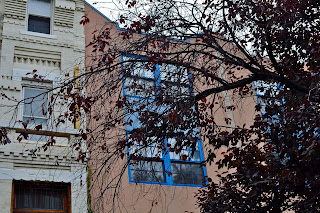 Mother Nature is most decidedly annoyed with her errant top predators who have run amuck. 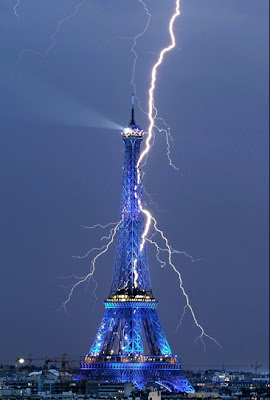 She will not easily forgive us for wantonly destroying her most beautiful and precious, intricately delicately balanced creations, which after all, took thousands and even millions of years to evolve to achieve their present imperiled glory. 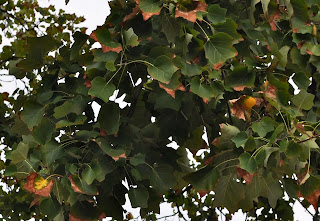 The calving ice such as the piece the size of four Manhattans that just broke off and melted from the Peterman Glacier, shocking veteran researchers, should be enough to alert us that climate change is proceeding far, far faster than the most dire predictions of the most pessimistic scientists.  And meanwhile two more violent storms threaten Wit's End and the entire Eastern US. 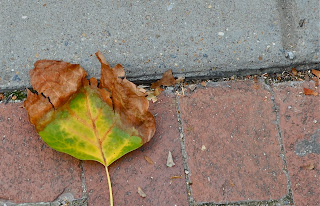