the subtle glory of a Nightingale

There is a story in the UK Telegraph that reports the nightingale population has been reduced by 91 percent over 40 years, raising the prospect of extinction.
When I was very young, I was fascinated by the entire canon of Hans Christian Anderson's fairy tales, which are deeply compelling parables with universal themes for people of any age. One of them, the story of the Emperor and his captured bird, was a particular favorite that I re-read many times. 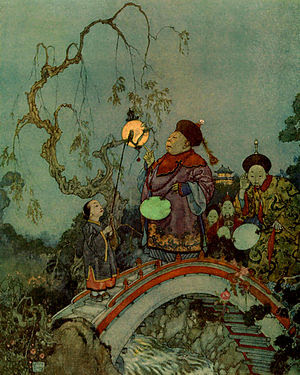 Also one unforgettable night, many years ago while in London, I was enthralled to hear a song of pure rapture and joy - a delectable liquid, molten sound of lush abandon.So, here is the best youtube I have found, which is still wholly inadequate in comparison to a living experience...but I think if you click, it's an enjoyable listen while following the rest of this post...

An anonymous comment on the last post shared a link to the state of Vermont's Forest Biology Lab report on the impaired health of their trees, which was blamed of course, on weather, insects, and fungal disease (anything other than human pollution) - to which I replied:

and earlier today added in a comment at Climate Progress:

"Because even the EPA is aware, as quoted in a draft report to them from the Integrated Nitrogen Committee: 'Impacts of reactive nitrogen on Terrestrial Ecosystems include...Ozone-induced predisposition of forest trees to damage by fungal diseases and insect pests'.
Translated, that means that atmospheric toxins from fuel emissions are the underlying cause of tree 'decline,' itself a forestry euphemism for 'gradual but inevitable, irreversible death'."

More pertinent, in reference to the aforementioned nightingale decline, is this activity today: In searching for an email address to write to Dr. William Schlesinger of the Cary Institute, who was quoted in the Scientific American article about the Nitrogen Committee report (last post), I came across this article he co-authored, about the effects of acid rain on calcium in the soils available for plant uptake, and the unimaginably hideous consequences for birds:

"In excess, the hydrogen ions that cause acidity also leach important nutrients, such as calcium and potassium, from the plants and soil. This can cause nutrient deficiencies that stunt forest growth. Birds may also suffer. In some areas, calcium loss is so severe that birds have a difficult time ingesting enough of this important mineral in their diet. As a result, they are unable to form eggshells during the spring nesting period."