What Snakes, Birds and Trees have in Common (hint: it's extinction) 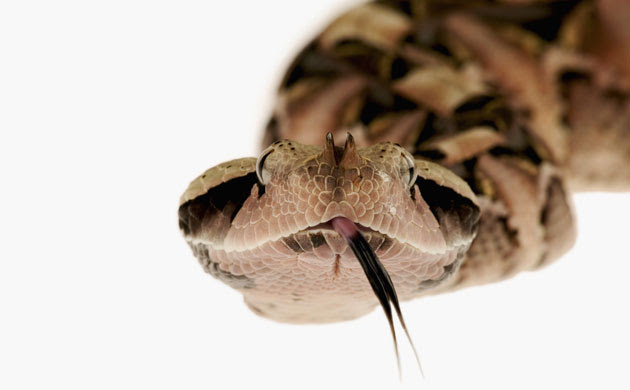 It is being reported that scientists have determined that the population of snakes is decreasing...but they can't say why. I decided to write to one of the journalists who authored an article about the research, because it seems to me that there are so many species in inexplicable decline - birds, bats, frogs, butterflies, bees and now snakes - that there might be an underlying, universal reason other than the individual diseases, habitat loss, pesticide exposure, and invasive competition that all are subject to. For one thing, these are only some creatures that have been studied - there are most certainly others that nobody has noticed. Is anyone counting chipmunks and mice? I have been noticing for some time that the size of birds is shrinking, and now it is confirmed! (paper found at the exhaustively compiled AGW Observer). I am not crazy after all! (One of the other papers listed said: "...does not exclude the possibility that other factors, such as a decrease in food availability, contributed to the decline in body mass.These declines may have serious implications for community structure and competition among bird species and may affect the survival of small passerines." 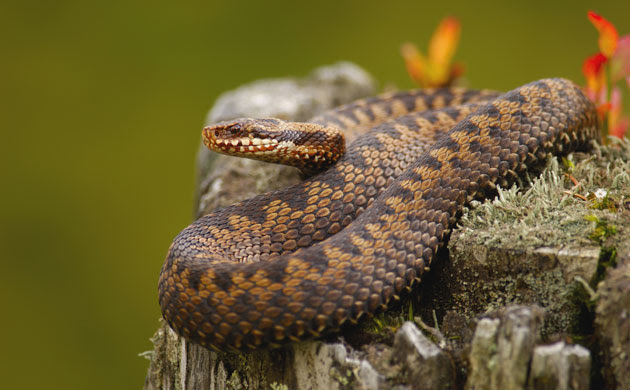 Dear Mr. Black,
I heard your story about declining snake populations on the radio this morning. As is the case with many other forms of life, from birds to bees to bats and frogs, researchers express puzzlement as to the cause. There are of course many pressures causing biodiversity loss, including habitat destruction and alien species and disease encroachment.
Unfortunately most researchers either ignore or are not aware that underlying the endangerment of animals is the decline of vegetation. Worldwide, the background level of tropospheric ozone produced from burning fuels is inexorably rising. It has long been established that ozone is toxic to both animal and plant life.
My particular interest has been focussed on trees, which are in the midst of a rapidly accelerating decline from cumulative, long-term exposure. More recently even annual plants have been exhibiting the symptoms of ozone poisoning. There is less for animals to eat - fewer seeds, nuts, berries and grains. This causes a cascading destructive ripple up the food chain.
This subject is well-understood and yet treated as taboo by foresters, botanists, and even environmental activists. I'm not sure why this should be so, unless the existential threat of acknowledging that we must stop burning fuel and switch to clean energy is too overwhelming to contemplate.
I have photographs and at the top a link to a page "Basic Premise" with a long list of scientific research at my blog, www.witsendnj.blogspot.com.
I am hopeful that people will become aware of the gravity of this situation before it is too late (if it isn't already!)
Sincerely,
Gail Zawacki
Oldwick, NJ
I believe that we will look back upon this time as the slow death of terrestrial biodiversity primarily because food supplies are dwindling, starting at the bottom of the food chain - with plants. I know the trees are dying from exposure to ozone - and the shrubs and broad-leaved plants and now the grasses. This has to translate into a shortage of seeds, nuts, berries, and grains that feed so many creatures, which makes them more scarce for predatory species. Many of the studies of animals with declining population factor in lost habitat and other influences, and still have no explanation for their disappearance.
Over the weekend many large trees blew over in Boston so I wrote another letter, this time to the reporter at the Boston Globe who quoted the weather service as claiming a wind "Macroburst" had knocked the trees down (see the post immediately prior to this one that incorporates "Ozone for Dummies" which has more detail about symptoms of ozone exposure - and thanks to Susan from GWEN for bringing this storm to my attention). 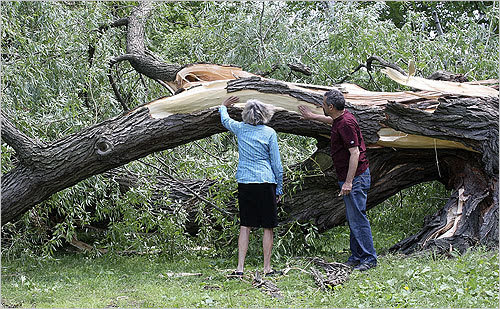