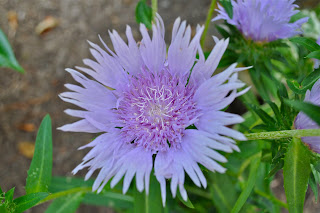 Yesterday when we were in a southerly direction we stopped for dinner with middle daughter Sophie, and Chuck. It's amazing luck that Chuck's car and house escaped serious damage from a storm this week, but still very sad to lose the aesthetic appeal and shade over his deck. 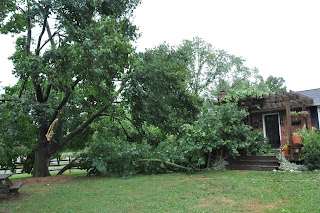 I had just come across this page at the membrane website, which has a couple of interesting links that are new to me. 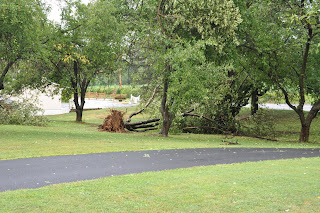 The first is a report from the year 2000, that advocated support for adding ethanol to gasoline and repeatedly asserts that adverse health impacts of ozone are "trivial" - but nevertheless reveals: 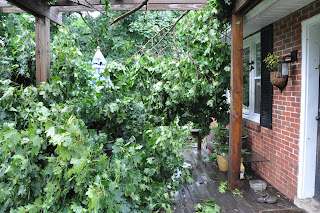 "To make the transition from MTBE to ethanol in the most rapid and least disruptive manner possible, ethanol blends could be allowed a volatility waiver. Many in the environmental community vigorously oppose this. They fear that increased hydrocarbon emissions lead to increased ozone levels and adverse public health impacts. Their position seems to be that the adverse impact of these increased emissions is so damaging that it outweighs the many undisputed environmental benefits of ethanol." 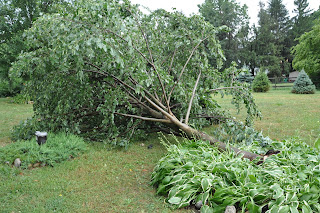 It appears that debate was quashed - and much basic research ceased - at the beginning of this century when the government mandated that ethanol be used (in a pretense of being cleaner)...while simultaneously underfunding the EPA as described in that NYTimes analysis today - rendering the government agency charged with defending the public safety from environmental threats wretchedly impotent as far as setting standards and regulating air pollution. 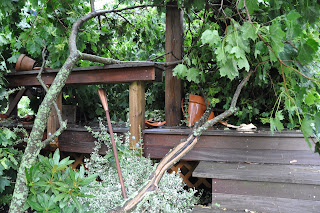 So naturally I wrote the Editor first thing, and complained that the effects of ethanol on vegetation are being overlooked at our peril. 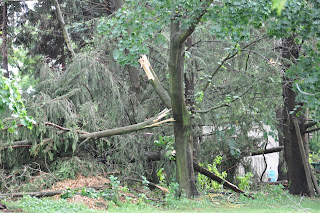 Go to Basic Premise for links to scientific research if you don't already know why!! No doubt the NYT, which subsists on fossil and biofuel industry advertising, won't be publishing that letter any time soon. (Prove me wrong, NYT!) 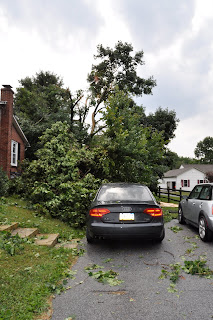 Sophie describes to big sister Alice the violent winds that knocked down the trees. 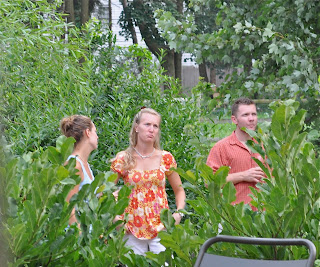 Earlier yesterday, at Significant Other's suggestion (itself a mind-boggling event worthy of deep contemplation) we went to Point Pleasant, 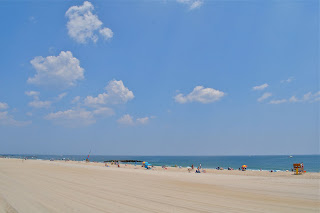 to join the nearest Hands Across the Sand event, in opposition of offshore oil drilling, which had been organized by this charming pair. 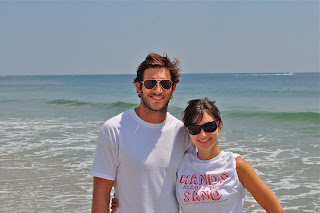 So we got to feel kind of useful, and had a mini-vacation day on the Jersey shore. 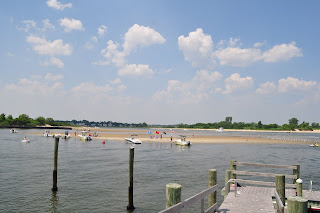 This was the relaxing view from our lunch table. 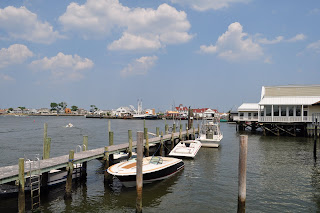 But the rest of what was to be seen was quite grim. 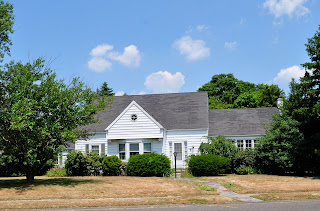 Grass is dying back much, much faster here than at home. It's not all this bad, but it's heading that way, and a very ominous portent of harvest, I fear. It's just a bit warmer there, and along the route to Delaware we took for dinner - which made me think of two things. Warmer temperatures = both faster evaporation of rainwater & and higher levels of ozone. 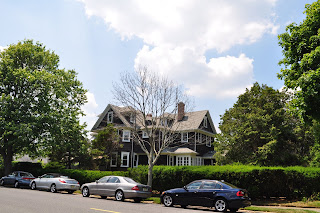 The trees in towns are in the expected bad condition. 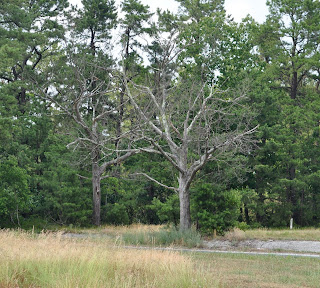 But there are so many completely dead trees lining Highway 70 it was overwhelming. I was in such shock I only took a few pictures. I am thinking I should go back with a video camera. 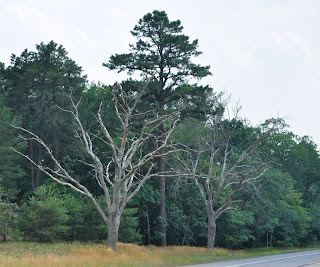 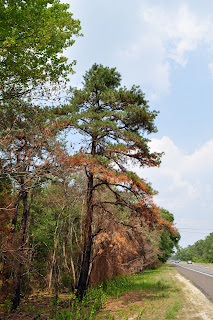 There is glaring evidence of recent wildfires. The obvious idiocy of building housing in woods prone to burn didn't deter our enterprising New Jersey developers! The acquisition program by government to prevent such sprawl has been a notable failure. 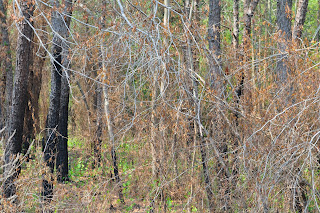 Of course now that you can add ozone damage to drier, acidified soils to a natural tendency to burn, on top of the scorching temperatures we are already experiencing... I would not want to be in charge of fire-fighting there this summer - of course, there is rampant, nitrogen-loving lichen. 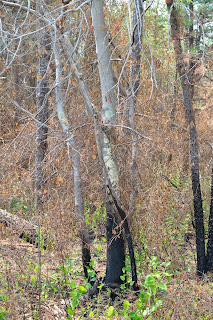 I have already mentioned the terrible observation that unlike last year, now even flowers themselves, not just their foliage, are stunted, deformed, thin and wilted. 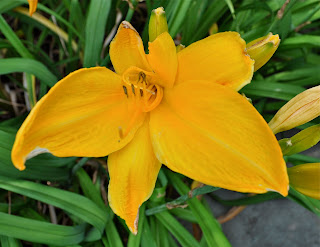 And I found that to be reflected in the gardens near the beach. 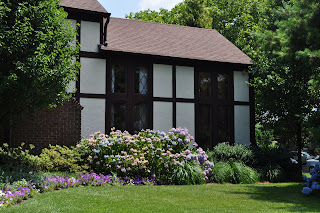 This is typical of hydrangeas in Point Pleasant as well as here at home. 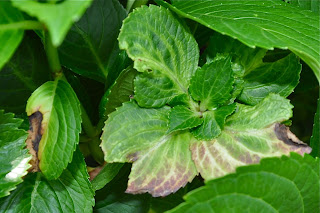 In addition to symptoms of external damage to normal leaves, ozone entering the plant causes genetic mutation, which could explain leaves and petals emerging misshapen. 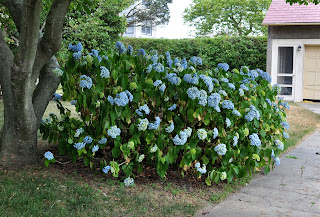 General decline and impacts on the cellular structure could both account for a depletion in nutritional value of plant products. 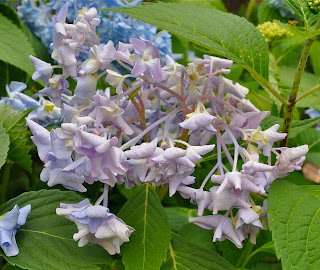 Next to the video I linked to earlier this morning about the terrible death of an infant due to a falling tree limb in Central Park, I saw this story on the Huffington Post about a young girl attacked by coyotes in Westchester. The local police postulated that the coyotes must be rabid, because that is aberrant behavior and otherwise inexplicable. 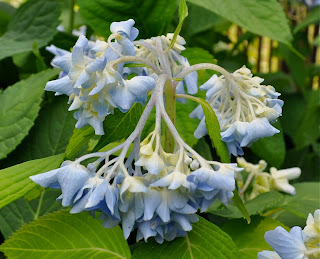 I don't want to get too carried away speculating that other peoples' personal tragedies have potential significance in the grander scheme of things - but I would like to point out that the bottom of the food chain is collapsing. 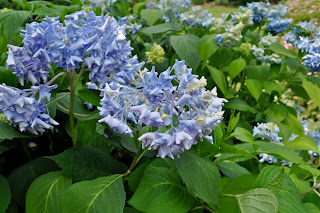 Certainly this chard does not possess all the vitamins and minerals it normally would. 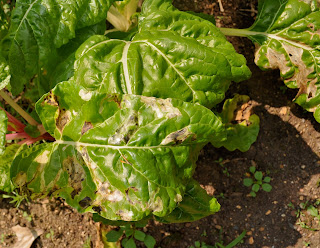 In addition to possessing lowered nutritional value, leaves, nuts, berries, fruits, and seeds are simply scarcer for wildlife to eat, and consequently the top predators have less to prey upon. It grieves me to be labeled an "alarmist" for expounding a logical and inevitable extrapolation. I question whether those coyote were sick, or perhaps just hungry. And I will not be surprised if such incidents increase in frequency in the future, with coyote and even bear...just as the number of people killed and injured by falling trees and branches is already indubitably mounting up. 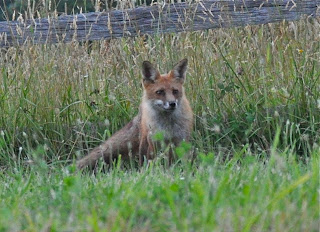 I was overjoyed Friday to get these photographs, the first decent ones I've had a chance to take, of a neighboring fox. I hope he can find food!!! 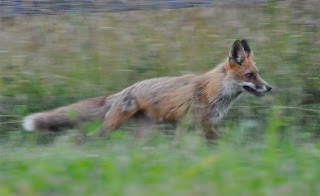 Update: Unbelievable, but I just checked DesdemonaDespair and read two (possibly) related stories:
1. lawns dying in Britain (blamed on drought, not ozone) and
2. tigers attacking people (blamed on "mystery disease" causing loss of ability to hunt prey, rather than lack of prey)
!!!!
Posted by Gail Zawacki at 11:51 AM