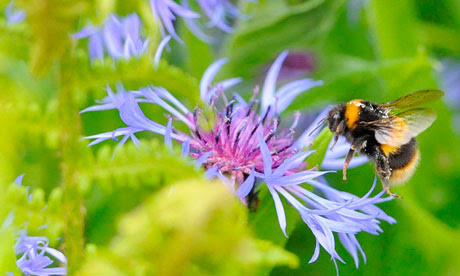 "Pollinators are also crucial for the quality of fruits and vegetables. Perfectly shaped strawberries, for example, are created only if every single ovary has been pollinated by an insect. And the number of seeds in a pumpkin depends on the number of species of insects that have pollinated the plants. "If you've got 10 pollinators, you'll get more seeds in the pumpkin than you would have got if you've just got one pollinator," said Giles Budge of the Food and Environment Research Agency. "It is important to have that diversity in a pollinating population."

According to the Centre for Ecology and Hydrology, three of the 25 British species of bumblebees are already extinct and half of the remainder have shown serious declines, often up to 70%, since around the 1970s. In addition, around 75% of all butterfly species in the UK have been shown to be in decline."

From this article in the UK Guardian.