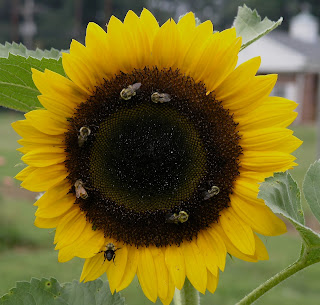 I have read a number of accounts of bee colony collapse but this article by Wayne Ellwood is the best.

"According to the International Bee Research Association, a third of our diet comes from flowering crops and honeybees are responsible for pollinating about 80 per cent of them. They are essential in the production of at least 90 commercially grown foods. Apples, pears, apricots, melons, broccoli, garlic, onions, peppers, tomatoes and coffee – they all rely on bees for pollination. Trying to put a dollar value on ‘pollination services’ is a bit like trying to put a price on fresh air or clean water. Pollinators are more important than that. Bee-pollinated forage and hay crops like alfalfa and clover are also used to feed the animals that supply meat, milk and cheese. It doesn’t matter whether you’re a vegetarian or a meat-eater. Bees put food on the table. A report by the National Research Council in Washington hit the nail on the head: ‘Pollinator decline is one form of global change that actually does have credible potential to alter the shape of the terrestrial world.’4

Pollinators, especially bees, are what pioneering environmentalist Rachel Carson called a keystone species, at the very centre of the entire food web. Remove the keystone and the whole edifice collapses."

"When California was wild, it was one sweet bee-garden throughout its entire length, north and south, and all the way across from the snowy Sierra to the ocean... The Great Central Plain, during the months of March, April and May was one smooth, continuous bed of honey-bloom, so marvellously rich that, in walking from one end of it to the other, a distance of more than 400 miles, your foot would press about a hundred flowers at every step. Mints, gilias, nemophilas, castilleias, and innumerable compositoe were so crowded together that, had 99 per cent of them been taken away, the plain would still have seemed to any but Californians extravagantly flowery. The radiant, honeyful corollas, touching and overlapping, and rising above one another, glowed in the living light like a sunset sky...1" 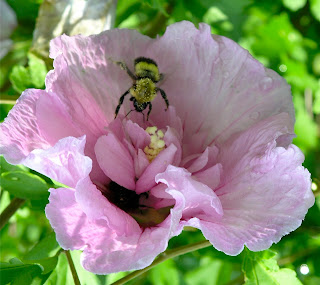 The latest culprit is reported to be cell phone radiation.
Posted by Gail Zawacki at 8:05 AM