I stumbled across an interview of the author David Edwards, published way back in the year 2000. He had some fascinating and prescient observations that have left me abashed and humbled, given that it was ten years ago that he was entirely cognizant of what I have only so recently and painfully become aware - it is well worth reading the entire article (written by Derrick Jensen) and perusing his ongoing expose, Medialens. I'm going to select some of my favorite passages (in italics) with photos I took, yesterday and today, of various sorts of leaves. They are all stippled, some of them astonishingly so - exactly as are those described by the Nashville TV station, only right here in New Jersey. I'm posting them because, having investigated the cause and sent some samples to a lab for testing, their report is due for imminent release (I have it on good authority!). *anticipation* *suspense* 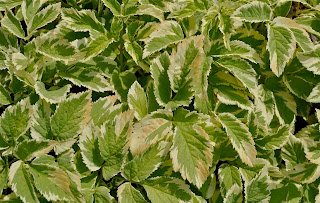 Snow On The Mountain has several interesting symptoms of ozone exposure - bronzing, stippling, and turning the opposite color of what it should be - a variegated green and white - to all green (with holes).
Jensen: You've said that there are five things everyone ought to know. What are they?

Edwards: The first is that the planet is dying. One way to chart the damage is to look at insurance figures. Between 1980 and 1989, the insurance industry paid out, on average, less than $2 billion a year for weather-related property damage. From 1990 to 1995, however, hurricanes, cyclones, and floods in Europe, Asia, and North America cost the industry an average of more than $30 billion a year. The Red Cross is warning that climate change is about to precipitate a century of natural disasters. We have already seen a number of "superdisasters" in Honduras, India, Venezuela, and Mozambique, all "clearly tainted by human actions," according to climatologists. 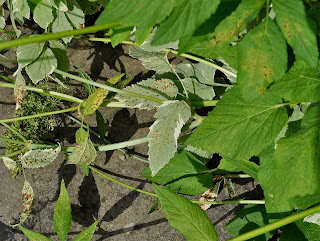 Global warming affects more than the weather. Last year, marine biologists estimated that between 70 and 90 percent of the coral reefs in the Indian Ocean have died due to global warming. Coral-reef ecosystems are home to one-fourth of all fish species. And they're just the first major victims of global warming. Others will soon follow. Scientists now predict that the polar bear will be extinct in the wild within twenty years. 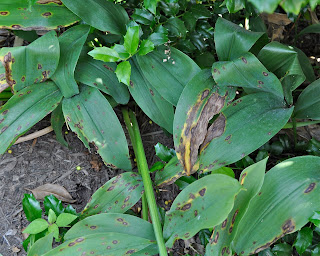 The leaves of Lily of the Valley, are burnt with holes and streaked with brown, dead tissue.
Now, many environmentally conscious people would argue that the scale of the environmental crises threatening us is being communicated. After all, most newspapers these days have environmental correspondents. But the level of coverage in no way matches the severity of the threat. Think for a moment about the media response to the supposed threat of the Soviet Union during the Cold War: Hollywood churned out pro-America films; novelists wrote thrillers pitting the "free world" against the "godless communists"; headlines decried the dangers of communism; and so on. By comparison, there's next to nothing being said or written about the threat of global warming. 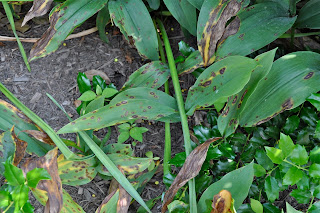 A favorite ground cover has the prominent veins associated with the inability to photosynthesize and produce chlorophyll, leading to thin foliage.
Jensen: I know what you mean. I like baseball, but it breaks my heart to see ten pages in the newspaper every day on sports and maybe three column inches a month devoted to the biodiversity crisis.

Edwards: This leads to the second thing that everyone should know, which is that huge numbers of intelligent, motivated people are working all-out to prevent action that could save the planet. No matter how clear the evidence or how stern the scientific warnings, time and again, effective action is obstructed. The Global Climate Coalition, the United States Chamber of Commerce, and the National Association of Manufacturers are all vigorously opposing even the trivial cuts in greenhouse-gas emissions proposed by the Kyoto Climate Treaty. The irresponsibility is breathtaking. 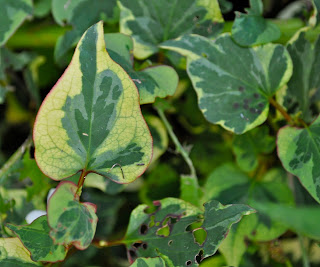 It surrounds the base of this delightful granite Japanese garden lantern (acquired at huge carbon cost, pre-enlightenment)
The so-called debate on global warming is a war between the biggest enterprise in human history-the worldwide coal-and-oil industry-and the planet's ability to sustain life. And our hearts and minds are battlefields in that war. The corporate press and corporate-financed politicians keep talking about global warming as if there's significant doubt about it, yet the "debate" pits perhaps half a dozen high-profile skeptics bankrolled by this trillion-dollar industry against the consensus of twenty-five hundred of the world's most qualified climatologists working as part of the Intergovernmental Panel on Climate Change. How is it that the opinions of these six-whose arguments are often shot full of illogical and absurd statements-carry the same weight as all that scientific evidence? 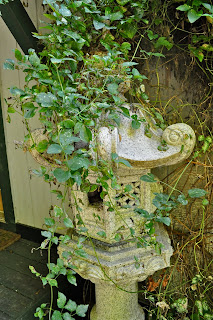 and has come to envelope the porch at Wit's End. The degree of stippling is amazing!
This brings us to the third thing I believe everyone should know, which is that the death of the planet is symptomatic of a deeper, institutionalized subordination of all life-including human life-to profit. Algeria is a typical example. It's been ruled by a military dictatorship since 1962. Elections were held in 1991, but the government scrapped them when it became clear a militant Islamic party would win, and since that time some eighty thousand people have died. In some cases, armed attackers have descended on defenseless villages at night to cut the throats of women and children. The violence has been characterized by psychotic frenzy, including the dismemberment of infants. It's not exactly clear who is doing all of it, although the government is heavily implicated. But one thing is for sure: the world has done nothing about it. 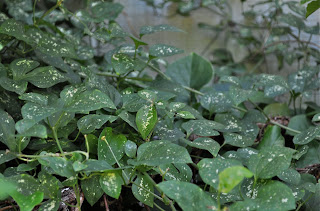 I just noticed it last night, looking out the kitchen window with the sunset lighting up the leaves.
Jensen: Why not?

Edwards: I can answer that question with one word: oil. Algeria has gas and oil deposits worth billions and supplies the gas for Madrid, Rome, and many other European cities. It has a $2.8 billion contract with British Petroleum. Because of this, no Western government wants to make trouble with Algeria. John Sweeney-just about the only British journalist who has written anything about it-called the eighty thousand deaths "Europe's gas bill." Instead of demanding an end to the slaughter, the European Union is giving Algerian generals $125 million for "restructuring and democratization." 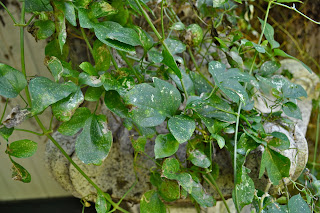 So this morning I went out to take pictures, and also ventured around to the other side of the wrap-around porch, where the Concord grape is languishing.
This story, of course, has been repeated any number of times: Guatemala, El Salvador, Brazil, Nicaragua, Nigeria, Russia, Indonesia, East Timor, Iraq, Vietnam-anywhere there are profits to be made. Yet few people in the media want to talk about this pattern in which the economic interests of the U.S. and Britain are synonymous with the systematic exploitation and impoverishment of Third World populations. It's the same with the environment. Although the planet is being demolished before our eyes, the media remain content to artificially isolate each new disaster, leaving us to try to complete the jigsaw puzzle. 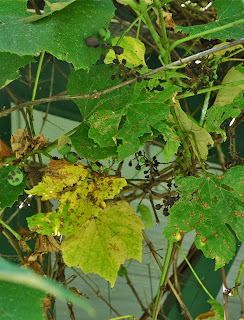 Not only are the leaves pockmarked and yellowing, but the fruit is shriveled.
The absence of discourse about these patterns leads us to the fourth point, which is that the economic and political forces that profit from destruction and atrocity also profit from the suppression of truth. It's the job of the corporate media and the politicians to prevent us from digging beneath the surface and uncovering the truth. 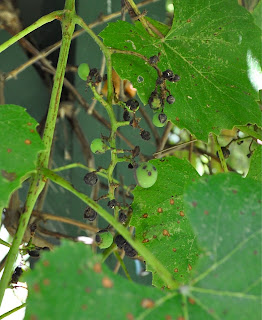 Dicentra is spectacularly blackened.
It's important to be clear, however, that our delusions are not just the result of some conspiracy on the part of a few business moguls. The real problem is much more structural and psychological. Modern thought control is primarily dependent not on crude, conscious planning, but on the human capacity for self-deception. One of the biggest obstacles to social change is the propaganda system working undetected inside our own heads-mine included. 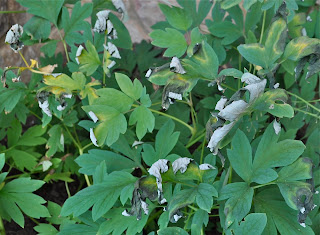 This comes back around to the last of the five things everyone should know, which is that, if the planet is being killed by institutionalized greed and the sacrifice of life for profit, then the solution is to undermine the illusion that greed is "normal" and even desirable. And one way to do this is through compassion. When we reinforce our capacity for compassion and love and concentrate on other people's needs, rather than on our own, we begin to weaken the psychological system that powers the selective inattention and self-deception we were talking about. 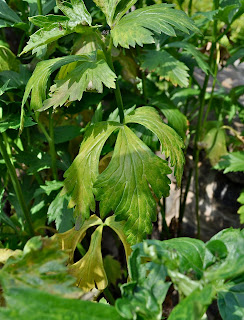 Delphinium hasn't even set buds yet but already the leaves are badly damaged.
...one motivated person can actually accomplish a disproportionately large amount of good. Selfish illusions are just lies based on nothing, and even one moment of honesty arising from the desire to relieve suffering can destroy vast numbers of illusions. If the first rule of a dysfunctional system is "Don't talk about it," then our primary goal should be to tell the truth, to be as honest as we can manage to be. 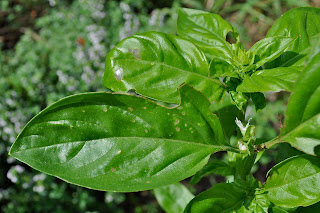 This basil, which was planted in soil about a month ago, has the identical spots.
When I read something truthful, something real, I breathe a deep sigh and say, "Fantastic-I wasn't mad or alone in thinking that, after all!" So often we are left to our own devices, struggling in the dark with this external and internal propaganda system. At that point, for someone to tell us the truth is a gift. In a world where people all around us are lying and confusing us, to be honest is a great kindness. 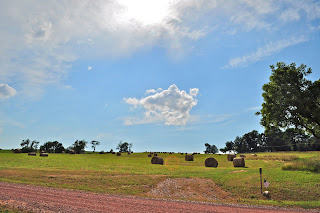 I am trying to find something lovely wherever I can manage. 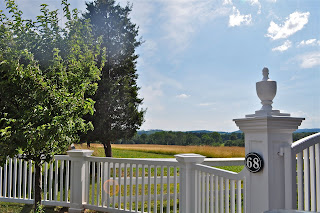 The large farm down the road from Wit's End has quite a view...I still don't know why the distant trees are so bare. 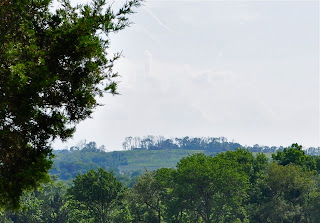 Today I was contacted by the organizer of the Hands Across the Sands event on Saturday. Here is one of the photographs she has posted on facebook of the group that assembled in Spring Lake to protest offshore drilling and promote clean energy. I am so delighted to see young people brave enough to face the future with activism!