With youngest daughter camping out at the Bonnaroo Concert in Tennessee, this story of sudden, fatal floods in Arkansas is worrisome. These insanely heavy precipitation events are predicted by climate change science, because warmer air holds more water vapor, and produces more intense storms. Recently there have been devastating deluges in many places, including all over the midwest, in Tennessee, and in New England, not to mention the UK, and Eastern Europe. These events, not to mention record-shattering blizzards, should be linked to our habit of burning fuels and raising average global temperatures! 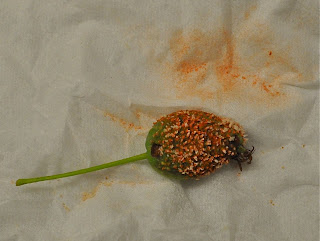 These little oddities I found with many others hanging on an ornamental pear. I guess the fruit, which is not considered edible for people although birds enjoy it, has been colonized by some fungus, which then deposited spores all over the tissue I wrapped it in until I had a chance to take the pictures. There are many strange and unprecedented things occurring in the natural world that I would like to explore and discuss, but I am traveling and have only intermittent access to the magical intertubes. 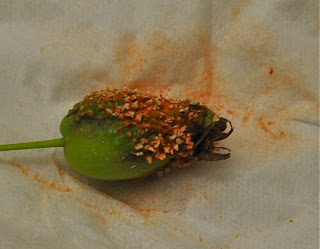 For now the two pictures following must stand in for all the other things I am seeing and thinking and reading about. The first is the staggering acceleration of vegetative damage, apparent in leaves and quite ominously, in lawns and fields of hay. Another is, how did we come to this degree of desperation - what folly for perhaps 3 centuries of hubris and greed has led us to disassociate our survival from the vibrancy of the natural world? And of course there is the question, once one has accepted the likely inevitability of vast numbers of extinctions, of how to respond to it. Along those lines is a quote found in the chapter, "Disconnection From Nature," (which is a very important topic), addressed in Clive Hamilton's "Requiem for a Species" which I have almost finished - and is a philosophical treatise that is essential reading for anyone struggling with the burden of knowing of our existential threats: 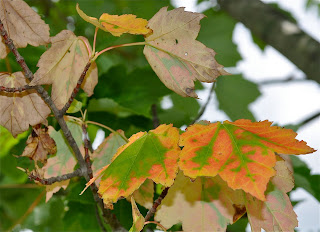 "William Derham, who in 1711 delivered the prestigious Boyle Lecture, put it more bluntly:
'We can, if need be, ransack the whole globe, penetrate into the bowels of the earth, descend to the bottom of the deep, travel to the farthest regions of this world, to acquire wealth, to increase our knowledge, or even only to please our eye and fancy.'" (P. 141) 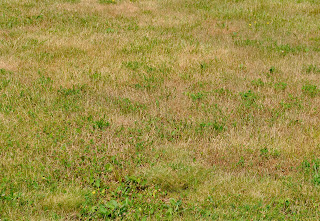 Here is a visceral description of the deluge alluded to at the top of this post:

Floodwaters that rose as swiftly as 8 feet an hour tore through a campground packed with vacationing families early Friday, carrying away tents and overturning RVs as campers slept. At least 16 people were killed, and dozens more missing and feared dead.
The raging torrent poured through the remote valley with such force that it peeled asphalt off roads and bark off trees.