Back to the Nitrogen!

Home in New Jersey from Costa Rica, it has taken a few days catch up. 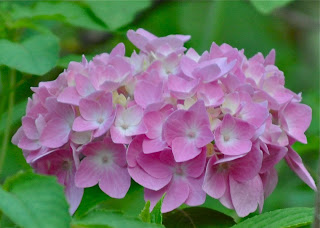 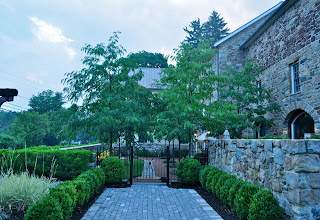 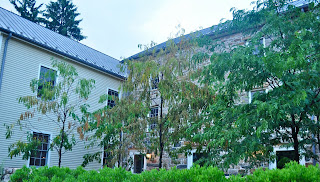 Now, still in June, they are skipping the yellow leaf stage and going straight into wilted, brown, dead. 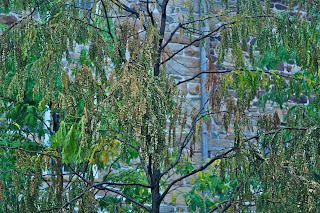 I don't know which ingredient in the toxic atmospheric cocktail we have created is the most prevalent agent causing trees to die. 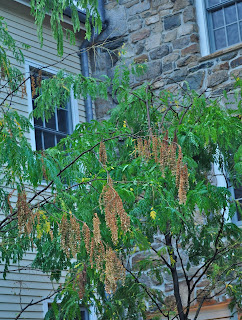 But here may be an important line of inquiry, one I have long suspected:

According to an article in Scientific American, it looks like the US Government is finally taking notice of the nitrogen cycle that has spun out of control! A quote from the report:

"In the U.S. there are neither comprehensive laws nor adequate monitoring devices for regulating atmospheric nitrogen emissions from livestock and farms. Europeans passed the Gothenburg Protocol to Abate Acidification, Eutrophication and Ground-Level Ozone in 1999, a pact signed by 49 countries, but the U.S. has dragged its feet. Schlesinger thinks that national arguments over climate change have allowed the U.S. to ignore the nitrogen problem, which he predicts will be the next big environmental issue. 'It's another example of humans upsetting global biogeochemical cycles with unintended consequences,' he says."
"It's clear that humans are adding nitrogen to Earth's surface. Researchers do not know yet where it all goes, 'but we do know that increasing concentrations of nitrogen in unexpected places will cause significant environmental damage that we will all learn to regret,' Schlesinger wrote in a 2009 report in Proceedings of the National Academy of Sciences."

There is now an "Integrated Nitrogen Committee" to advise the EPA on research and regulation policy (it remains to be seen if any action results) - following are some excerpts from the Introduction of their draft report:

"In general, the Committee finds that:

And, excerpts from p. 87, listing the following

4. Ozone-induced predisposition of forest trees to damage by fungal diseases and insect pests, most clearly established in the case of root disease and bark beetles in the pine forests of southern California.

6. Ozone induced direct injury to foliage, most clearly established in the case of “emergence tip burn” in eastern white pine.

7. Acidification induced decrease in frost hardiness of high-elevation conifer forests, most clearly established in the case of red spruce in the northeastern United States.

There are limits to how much plant growth can be increased by N fertilization. At some point, when the natural N deficiencies in an ecosystem are fully relieved, plant growth becomes limited by availability of other resources such as phosphorus, calcium, or water and the vegetation can no longer respond to further additions of Nr. In theory, when an ecosystem is fully Nr-saturated and its soils, plants, and microbes cannot use or retain any more, all new Nr deposits will be dispersed to streams, groundwater, and the atmosphere.

Nr saturation has a number of damaging consequences for the health and functioning of ecosystems. These impacts first became apparent in Europe almost three decades ago when scientists observed significant increases in nitrate concentrations in some lakes and streams and also extensive yellowing and loss of needles in spruce and other conifer forests subjected to heavy Nr deposition. In soils, most notably forest soils because of their natural low pH, as NH4+ builds up it is converted to nitrate by bacterial action, a process that releases hydrogen ions and contributes to soil acidification.

The buildup of NO3 ̄ enhances emissions of nitrous oxides from the soil and also encourages leaching of highly water-soluble NO3 ̄ into streams or groundwater. As negatively charged NO3 ̄ seeps away, positively charged alkaline minerals such as calcium, magnesium, and potassium are carried along. Thus, soil fertility is decreased by greatly accelerating the loss of calcium and other nutrients that are vital for plant growth. As calcium is depleted and the soil acidified, aluminum ions are mobilized, eventually reaching toxic concentrations that can damage tree roots or kill fish if the aluminum washes into streams (Vitousek et al., 1997).

Forests, grasslands, and wetlands vary substantially in their capacity to retain added nitrogen. Interacting factors that are known to affect this capacity include soil texture, degree of chemical weathering of soil, fire history, rate at which plant material accumulates, and past human land use. However, we still lack a fundamental understanding of how and why N-retention processes vary among ecosystems much less how they have changed and will change with time and climate change (Clark and Tilman, 2008).

An over-arching impact of excess Nr on unmanaged terrestrial ecosystems is biodiversity loss. In North America, dramatic reductions in biodiversity have been created by fertilization of grasslands in Minnesota and California. In England, N fertilizers applied to experimental grasslands have led to similarly increased dominance by a few N-responsive grasses and loss of many other plant species.

In formerly species-rich heathlands across Western Europe, Nr deposition has been blamed for great losses of biodiversity in recent decades, with shallow soils containing few alkaline minerals to buffer acidification (Vitousek et al., 1997; Bobbink et al., 2009). Losses of biodiversity driven by Nr deposition can in turn affect other ecological processes. Experiments in Minnesota grasslands showed that in ecosystems made species-poor by fertilization, plant productivity was much less stable in the face of a major drought. Even in non-drought years, the normal vagaries of climate produced much more year-to-year variation in the productivity of species-poor grassland plots than in more diverse plots (Vitousek et al., 1997)." 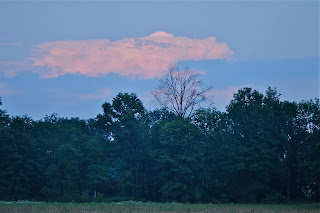 Going home late, in the dusk, I took this picture - even though it is so blurred, hey...it's the elusive Blue Heron! 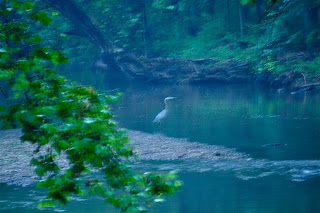 Thanks to DesdemonaDespair for posting the link.
And here (don't read it if you've already seen umpteen versions) is my latest letter - to the authors of the report that is the subject of this post:
Dear Drs. Doering, Aneja, Boyer, Cassman, Cowling, Dickerson, Kohn, Lighty, Mitsch, Moomaw, Mosier, Paerl, Galloway, Theis, and Armitage,
I am writing in reference to this article published in Scientific American about nitrogen. I am delighted to see that there is an Integrated Nitrogen Committee advising the EPA, because as you can see from this google search of my blog, I have become extremely concerned about the effects of atmospheric toxins on vegetation, in particular emissions of nitrous oxide.
I think you all should know that, outside of academic laboratories, SOMETHING is killing every species of trees - no matter what location or age - and, most recently, is visibly damaging annual crops, ornamentals in pots, and aquatic plants at a rapidly accelerating rate. I have seen the identical symptoms of injured foliage up and down the East Coast of the US, and just last week documented even more extreme plant loss in Costa Rica.
I suspect that nitrogen may be an important component in the toxic atmospheric synergy because 1. the levels have risen dramatically recently as fertilizer is used to raise crops for government-mandated additions of biofuel to gasoline; 2. the death of trees from ozone, although not unheard of for decades, is lately dramatically more widespread and fast; and 3. the decline of trees is being accompanied by a concurrent and unprecedented spread of particular varieties of lichen that are known to thrive in high levels of nitrogen.
I hope you will be willing to examine the empirical evidence I have been recording with photographs, and links to research on this topic at this blog, because we are running out of time to halt the carnage that is going on in fields, woods, and suburban landscapes. Even lawns that should still be emerald started turning brown this year, in the middle of June.
If we do not determine the major contributor to vegetative damage imminent, massive crop failures will lead to famine even in the developed countries. Already farmers such as these as reported on Memphis tv are in a panic - they have no idea that their crops exhibit the classic marks of ozone exposure - stippling, brown streaking, leading to leaf drop.
Scientists and researchers have a critical role - and a unique obligation - to determine the causes of ecosystem collapse and then take every opportunity to inform the public about the existential threat posed by fuel emissions and profligate use of nitrogen. If it IS primarily nitrogen - or a mix of nitrogen and biofuel emissions - it should be possible to quickly reverse the process before we destroy the bottom of our food chain. Then maybe we will have a little breathing space to tackle climate change and ocean acidification. Please treat disruption of nitrogen distribution as the emergency it has become!
Any comments or questions are welcome. Click here for a link to my WWF Climate Witness profile for personal background.
Respectfully,
Gail Zawacki
Oldwick, NJ
Posted by Gail Zawacki at 4:11 PM