This morning I heard a great rushing sound and ran to the door to see if perhaps some enormous truck was hurtling down the drive, or a helicopter landing on my roof. 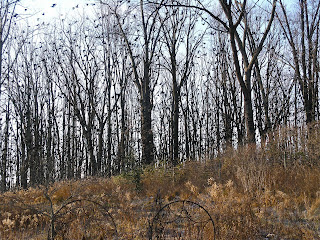 Instead I was greeted by a scene right out of Hitchcock. The Birds. 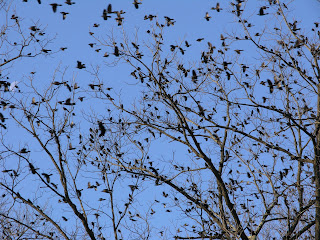 Wave after wave of them flew tumultuously through the trees. 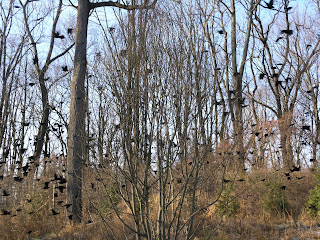 I think they are starlings - clever, invasive species, decimating native birds as though they haven't got enough to contend with from pollution and climate change already. I fear there are very few left, and like the lichen and the jellyfish this part of the ecosystem will inherit a world dominated by harsh predatory, metallic black starlings. Welcome your new ornithological overlords! 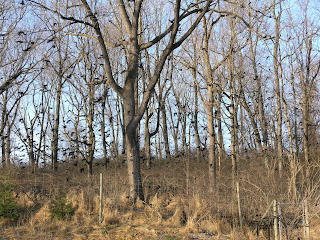 From an article linked to earlier today found at Science Daily, I have discovered the website of the International Nitrogen Initiative, where this information and much more is to be found. Excerpts follow, and most noteworthy, this is a relatively recent concentration of nitrogen in the atmosphere, which increases ozone. And it hasn't been on the radar of most climate change science.

There are two major problems with nitrogen: some regions of the world do not have enough reactive nitrogen to sustain human life, resulting in hunger and malnutrition, while other regions have too much nitrogen (due mainly to the burning of fossil fuel and to the inefficient incorporation of nitrogen into food products) resulting in a large number of major human health and ecological effects. The rate of change of the problem is tremendous, probably greater than that for any other major ecological problem. For example, half of the synthetic nitrogen fertilizer ever used on Earth has been used in just the last 15 to 20 years. Opportunities to reduce these problems are plentiful. A prerequisite to reducing these problems is the development of a sound scientific base on which to begin to discuss policy options.

As nitrogen moves along its biogeochemical pathway, the same atom can contribute to many different negative impacts in sequence: as NOx it can increase ozone concentration in the atmosphere, decrease atmospheric visibility, and increase acidity of precipitation; following deposition it can increase soil acidity, decrease biodiversity, lead to coastal eutrophication, and then emitted back to the atmosphere as nitrous oxide it can increase greenhouse warming, and decrease stratospheric ozone. Nitrogen can be transported to any part of the Earth system, no matter where it was introduced. This sequence of effects has been termed the nitrogen cascade.