Several years ago I put up a fence to prevent the deer from eating everything in my garden. This baby slipped in somehow last summer and has been hanging around ever since. Yesterday she stood still and stared at me, waiting, as though she is hungry. I used to think of the deer as vermin, because their population was out of control. But now I grieve for them. I took a picture, and then left out food near the barn, before I even read this. 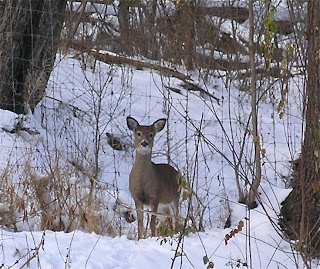 When I looked above her - dang, there was yet another tree with its bark hanging off. If you're new to this blog and have no idea what I'm talking about, click here first. 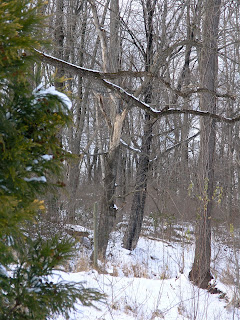 After that I took a little detour from my usual route, down a quiet dirt road, one of the few unpaved remaining in this area. 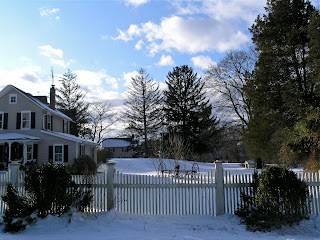 The snow and sky were a rare and stunning sight, but the pine trees...not so much, they are all in various stages of thinning. 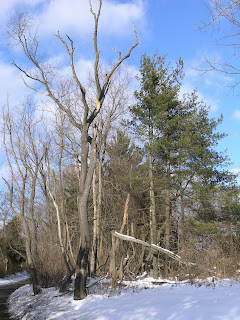 This is another location, like along Black River Road, where it is plain to see that palatial homes which were once discretely sequestered behind healthy stands of trees and underbrush are now visible from the public byways. 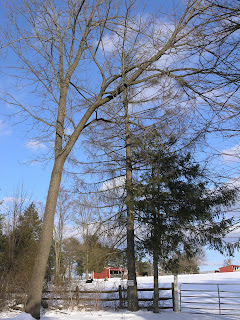 The pine in the center has no needles left at all. 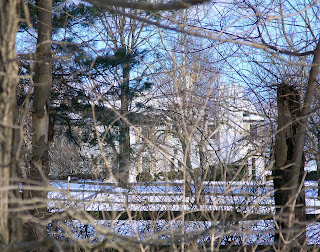 The owner of this formerly invisible home is on the Forbes list of billionaires. 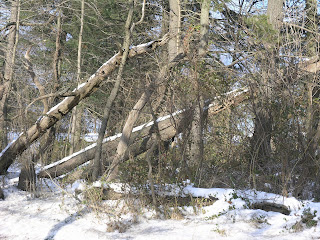 But the trees in his hedgerow are falling like dominoes, I suppose high walls will be the next recourse. 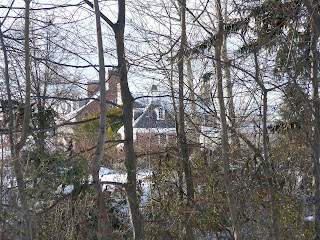 Here's another beautiful, formerly private home. Many of these trees are actually pines - but without their needles, and teeming crowded understory, the house is visible. Soon the handsome large conservatory on the right will be clearer to view. 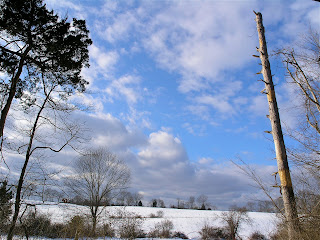 Many pines like the one on the right are well beyond thin. 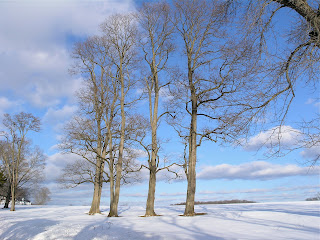 Here's the approach to yet another magnificent home. This enchanting estate belongs to the heirs to the oldest tobacco company fortune in the United States. 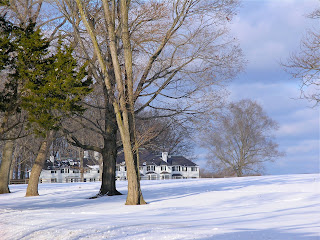 Shortly beyond it, I came upon the former dairy farm which is now the headquarters of the Upper Raritan Watershed Association. Their mission, according to their website, is "...to ensure the protection of the natural resources of the Upper Raritan Watershed through education, advocacy, land preservation and stewardship."
In light of that, particularly the "advocacy" part, I wrote some time ago first to staff, and then to members of the Board of Directors, asking them what URWA is prepared to do about the fact that the vegetation in the watershed they are pledged to protect is dying off with mind-numbing rapidity. Well, I got no answer from any of them and so I figured, things must be just dandy over there. But oops I discovered, not exactly. 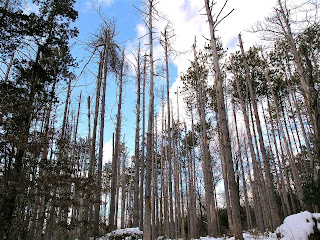 It looks more like they are guardians of a tree cemetery than a nature preserve. 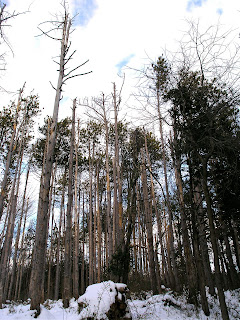 You have to wonder what they are thinking when they look at their own headquarters, never mind the rest of the watershed. 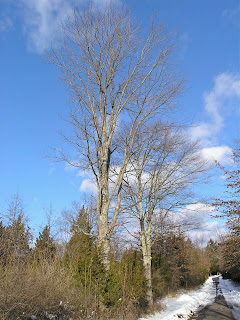 Their trees are festering with lichens just like everywhere else. 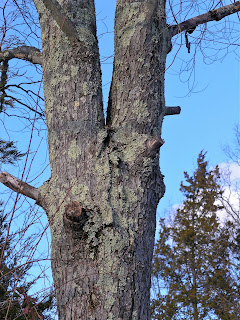 And where the coverage is heaviest, the bark is splitting and branches are broken. 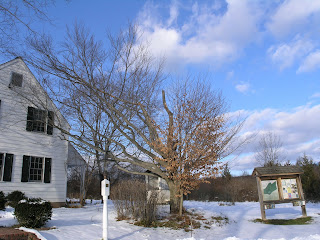 In front of their office building a magnolia has only half its crown left. 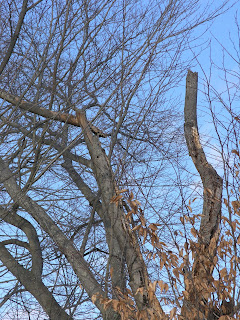 And what is still there, is rotting. 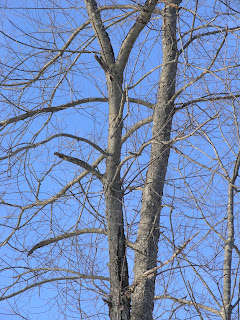 The tree next to it is breaking apart also. 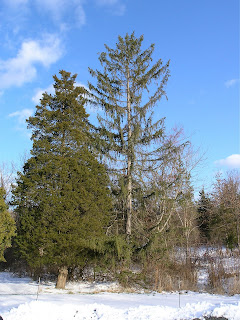 At the side of the parking lot, this pine tree is on its way to oblivion. 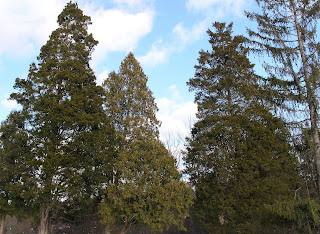 And the cedars adjacent to it are thinning and turning yellow. 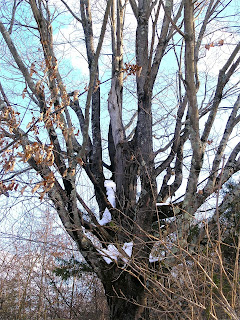 Here's one of the larger trees that remain, a maple with it's bark turning black, and peeling away from the limbs. 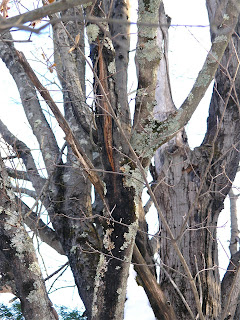 Here are views of the crown, note the dry rot on the right, the fresh splits on the closest branch, 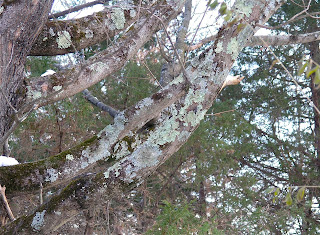 and of course our spectacular lichen. 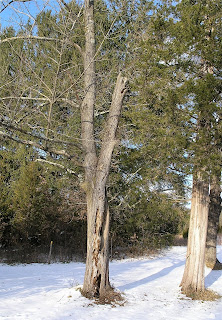 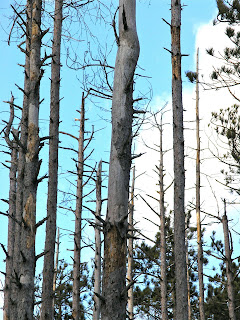 I have been writing to many people - scientists, government agencies, publications, and environmental groups. I wrote to members of my own township government to ask what we as a community should do to save our ecosystem, and not one of them answered either. 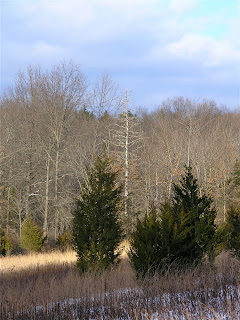 Sights like this white pine trunk in the center, which hasn't got a single needle on its branches, are making me feel fierce and furious about our so-called leaders. I'm referring to people who have declared their commitment to serve their community, either as paid staff or volunteers or elected officials, and yet the most important challenge we face to the very existence of our civilized society, they prefer to ignore. Instead of protecting our precious habitat they instead are presiding over its destruction. 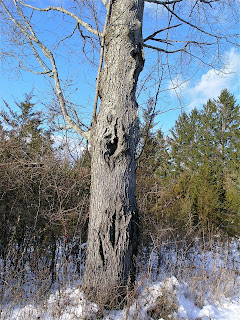 This tree looks like the apple tree in the Wizard of Oz, the angry one that talks and started throwing fruit. If this one could talk, it would say in very rude language that the directors and staff of URWA, and the Tewksbury Township committee members, and the entire US and state level Environmental Prostitution Agencies and the Department of Environmental Prostitution and the liars at the Department of Agriculture should either start doing their jobs or resign in disgrace. 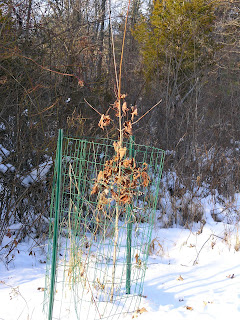 Oh but what will they do? Why, they'll plant baby trees like this maple. Notice it still has leaves clinging to the branches. That's because in the autumn, leaves don't simply fall off. There is a process where the tree actually pushes them off, and that takes energy. This sapling didn't have the energy, and it's not going to leaf out next spring. 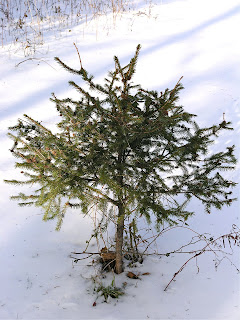 And this baby pine is a perfect example of what conifers do when they sense their own demise - they put all their energy into producing cones. Tragic, isn't it? Like a teenager becoming pregnant because she sees no other future for herself. 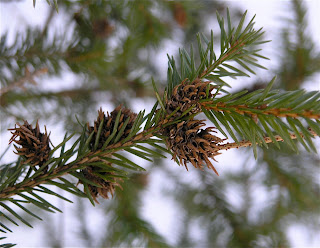