I said, "Let's splurge on a luxurious night in Manhattan for Christmas!" The first thing I saw was this giant crane, those are actual people standing at the railing. Luckily it didn't fall on us. 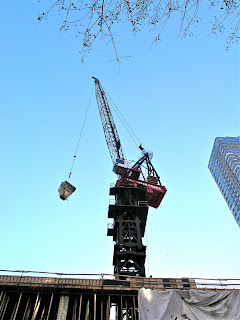 Significant Other is a genius. It was his idea to stay at the Algonquin Hotel, which is of course where my favorite snark artist, Dorothy Parker, reigned supreme at the Round Table. 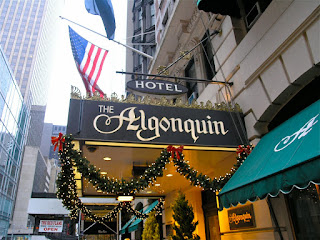 I don't get into the city very often, and I've never stepped inside to see the famous mural of brilliant writers in the lobby. 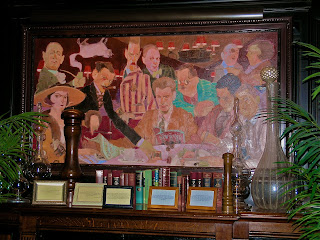 Now you know this is a cool place when you see the sort of clientele they attract. This is Zeke. 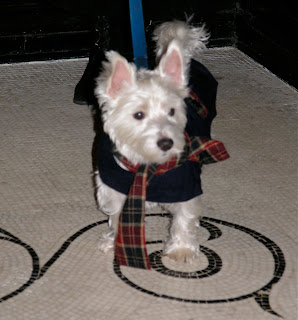 They also have a prize-winning, resident demon kitteh, Matilda, who sits stubbornly on the luggage carts. 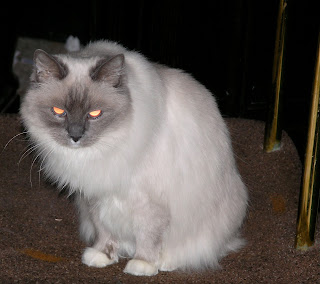 The wallpaper in the hallways has cartoons from the New Yorker. 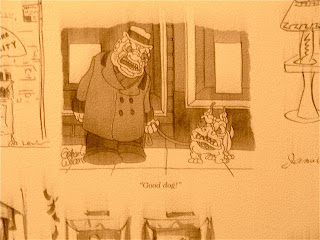 And the door of every guest room has a quote. 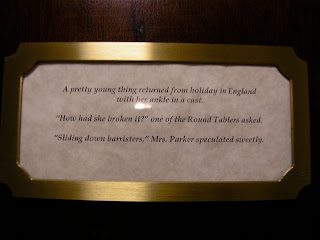 This is funny because Clare Booth Luce lived at LuShan, a castle not far from Wit's End. 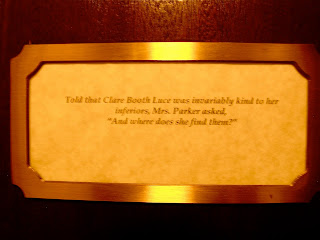 This is included especially for the Constant Weader at RealityChex:

Dorothy was refreshingly raunchy at every opportunity. 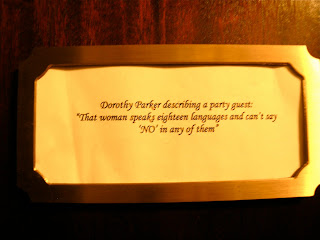 In that spirit I put on my sparkly shoes and we took a cab to Lupa for La Viglia - the traditional Christmas Eve feast of Seven Fishes. 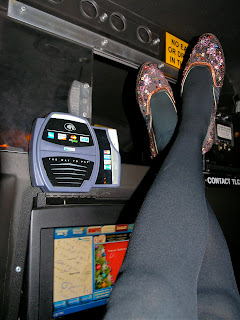 It was unbelievably delicious! It is easy to understand how people (those who can afford it) who live in this neighborhood and eat regularly at restaurants like this haven't the least notion of how we are exploiting our environment in a completely unsustainable way. There is so much culinary munificence, such bountiful excess. Or, if they do have a hint, why would they want to acknowledge they might ever lose such luxuries as ingredients shipped half way around the world, and a large class of people willing to prepare and serve them in delectable combinations? 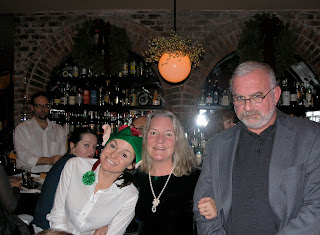 This sort of morbid musing was eased with the arrival of the second course - Polpo, Crispy Octopus with Farro and Salsa Verdi which, in addition to being utterly scrumptious, almost certainly constitutes my second sighting of the FSM! This holy visitation made the indulgence spiritual, and sublime. 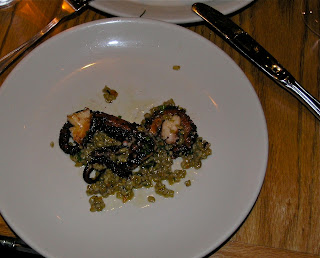 Here's the menu, for aspiring cooks: 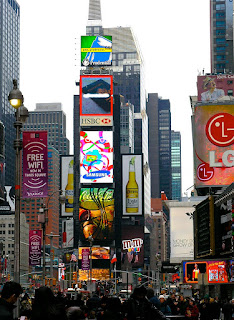 Christmas Day was overcast and drizzly. We wandered through Times Square, and found ourselves at the Bryant Park annual flea market. It makes for wonderful window shopping, because the vendors feature exquisite handmade crafts of very high quality, and most of them aren't even particularly expensive. 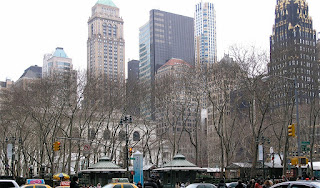 A pigeon huddled against the chill at the top of this lamppost. 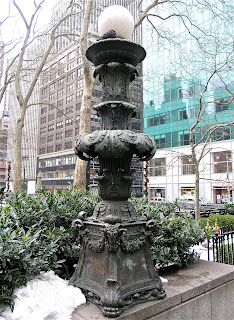 And three sparrows shivered in a conifer. 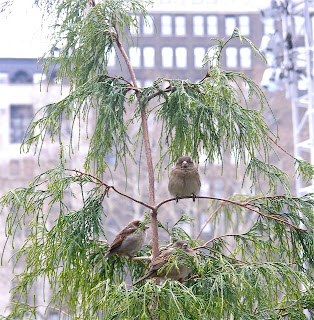 Here are some colorful stone bead necklaces from Tibet, 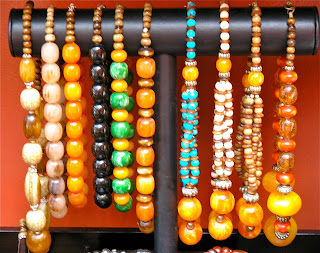 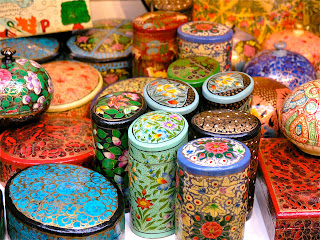 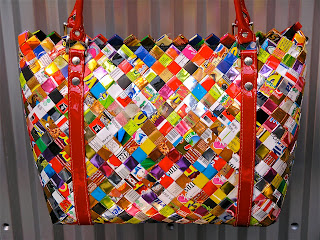 There are all sorts of fun collectibles as well. 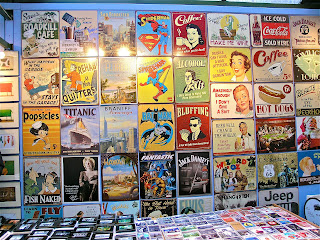 After a bit my toes were freezing, 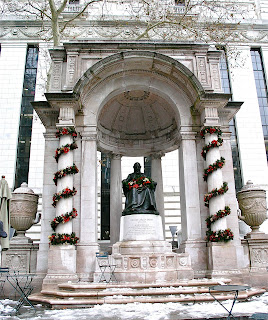 which if not cured, was considerably improved by hot Italian chocolate that is sumptuously, decadently rich. 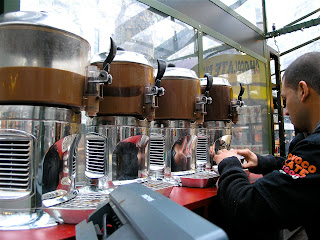 The park has a free skating rink. 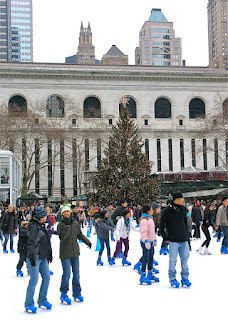 At the far end a large Christmas tree is prominent. There's a lady in a black coat in the lower left, for scale. 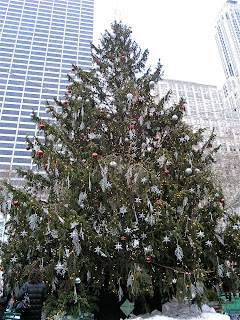 I have to say that even as prepared as I am for this sort of thing, I was shocked at how miserable this tree looked. It was patchy and thin and its dessicated branches hung listlessly straight down. 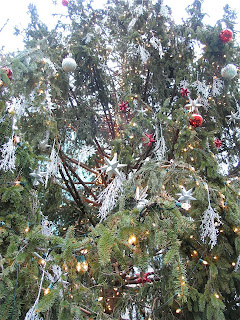 You could see it was losing needles, they had fallen on the snow. 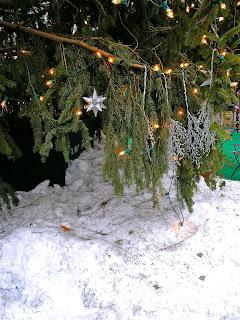 Back to the Algonquin, for dinner and music in the Oak Room, where Andrea Marcovicci sang a special homage to songwriter Johnny Mercer, including the early "Out of Breath (and scared to Death of You)" which I quite liked, and the more standard Skylark and Autumn Leaves. It was all splendid and delightful! 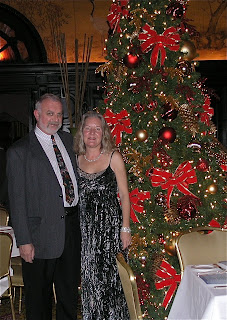 Somehow, looking for lyrics I found this holiday classic, but here is the original version - it had been amended because it was deemed too depressing:

No good times like the olden days, happy golden days of yore,
Faithful friends who were dear to us, will be near to us no more.

But at least we all will be together, if the Fates allow,
From now on we'll have to muddle through somehow.
So have yourself a merry little Christmas now."

With the exception of a couple of world wars, the developed west for the last century has been living profligately, at the pinnacle of unfettered consumption, without the slightest regard for the cost future generations must pay for our frenetic heedless plundering. We have been using every resource and reproducing as fast as we can, and tossing the toxic waste aside to be cleaned up another day, by somebody else. When you consider the mind-boggling amounts of money that go to military endeavors, switching to clean energy should be a bargain in comparison. 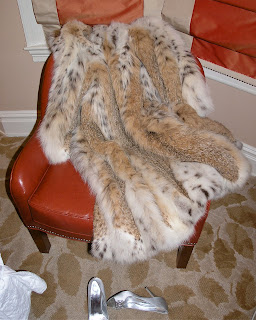 I love this lynx coat. I bought it years ago at a second-hand clothing store in Philadelphia. German-made and in perfect condition, it is unimaginably warm and light. Sometimes when I wear this coat, small children I have never seen before run up to me and wrap their arms around my legs. It is that irresistibly soft.
So many stories and songs for children are about animals. Think of the Pooh stories with Piglet and Owl that made Tonstant Weader fwow up, and every Disney movie since Bambi. The animals are going extinct, and all the children in the future will know of them will be a few surviving perhaps in zoos, and pictures. Pets will become a luxury, and then nonexistent as food supplies dwindle.
On to a Happy New Year!
Posted by Gail Zawacki at 5:48 PM