Here's a little red finch, perched outside my kitchen window this morning. I was advised many years ago by a Japanese lady that this variety of tree, with red branches and pale green foliage, was the only maple she would consider planting in the garden; the kind with red leaves was just too vulgar! It took some searching to find it as instructed, and since I planted it outside the back door, it has gone from three feet to about fifteen. 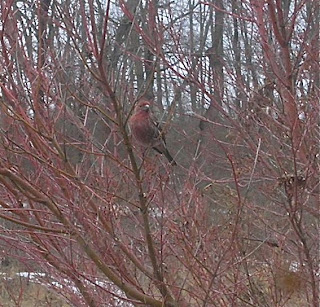 The other night over dinner I was asked by a friend why I bother to blog about dying trees, and climate change, when there is nothing I can do about either one. He suggested I would be better off applying my efforts where they might have some impact.
I replied that, first of all, blogging about dying trees and climate change doesn't mean I do it to the exclusion of all else.
Then I posed this question: if I were alive in 1929, and I knew that the Nazis were planning the Holocaust, and also knew that there was really nothing I could do to prevent it, what should I have done? Gone shopping?
Should Miep Gies have hid Anne Frank for two years even though ultimately she perished in a concentration camp?
To me, the answer is obvious. In the end, it is a moral choice. You do the right thing, regardless of the outcome. I have always liked to think I wouldn't have been one of the ignorers in 1929, but there's no way to know for certain.
For anybody who hasn't been following the conversation in the comments at climateprogress.org about the methane release, it provides an on-going, riveting glimpse into the rawest reactions of those who are among the most informed about amplifying feedbacks - and it's pretty scary. The thread is developing into a rich source of excellent links.
Posted by Gail Zawacki at 10:00 AM