At last, I am liberated. I have found the website of the Anti-Arboreal Association, and have realized that trees are evil. I no longer must wage my lonely crusade to save them from toxic greenhouse gas emissions! Here is one of many representative excerpts of wisdom from the AAA I could have copied:

"To set the record straight, there is no Y2K problem. There is, however, a T2K problem. By T2K I mean one thing: Trees 2 Kill. The problem lies in the numbers of these sick perverted beings.

Let’s lay down the logic blanket for the world to sit upon.

1. Trees have inhabited and festered upon this planet for millenia.

2. Humankind has dwelled upon this earth for millenia.

3. Trees have integrated themselves into humankind’s existence in a way in which no other being has. They have hooked and baited us with their “paper” and their “lumber” and their “oxygen” and sickest of all, their “shade.” These trees have ingrained themselves so deeply within our lives that many find the idea of a life free of the shackles of treevery “crazy.”

4. With the advance of science and intellect, humankind has begun to slowly ween itself from the barked teat and transition towards a digital, technology-based, paperless world. You can imagine the threat this poses to an established ruling class. The very realities they held as certain come crumbling down. There is only one choice of action.

5. The rooted ones have waged an all out war against technology. Think for a minute. Who will benefit the most from a backlash against technology? If all our digital systems come tumbling down, how will we record our information? Hemp? Papyrus? I think not. That’s like giving a lemur a Nobel prize for good thinkin’. Ain’t gonna happen. By effectively disabling our newfound freedom at its base, the trees can guarantee a renewed blind commitment from humanity.

So how does one solve the T2K problem? Does humanity stand a fighting chance? The answer is simple. 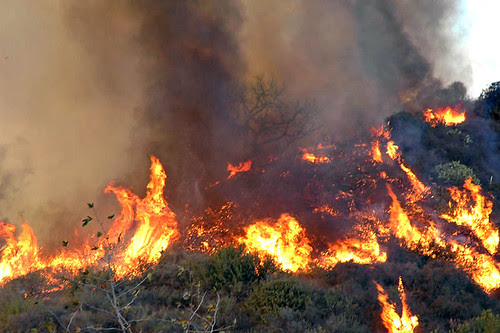 See what I mean? Brilliant!

Now most interestingly, a link on that website leads to an article in the UK guardian, which states:

"The chance of a tree killing a person in Britain is infinitesimal. There are barely half a dozen deaths a year attributed to trees, usually in cars driving into fallen ones. For a tree to topple on to a person, the odds are about 25m to one."

Since it's on a blog, it MUST be true! So how to explain last night's deaths?

"One person was killed and three others were injured in Westport, Conn., after a tree fell on a car Saturday night during the storm, police said.

Police in the New York City suburb of Teaneck were investigating whether two people found dead Saturday night were killed by a falling tree. The tree took down power lines as it fell. Chief Robert Wilson told The Record of Bergen County that police believe the two were walking on the sidewalk."

from this yahoo news story.

Update: another victim according to yahoo...

"On Long Island, Suffolk County police were investigating the death of a woman who was hit by a tree that fell on her Saturday night as she was leaving a family party in Bay Shore. Julia Hughes, 73, was pronounced dead at a hospital."

Add to this, within the last year (that I know of) a woman driving on Route 22, a whole family on the Garden State Parkway, a pedestrian in Central Park about a month ago, a jogger in Philadelphia last summer, all killed by trees falling unexpectedly (none of these in windy weather).

How does that fit into the odds?