I believe it is possible to extrapolate the trajectory of social collapse from the pace of ecological collapse. 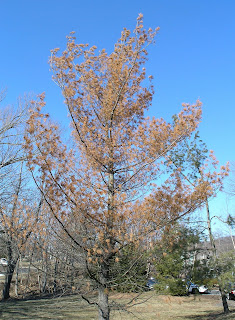 We simply can't continue to exist as we have without the benefits of the environment we evolved in. 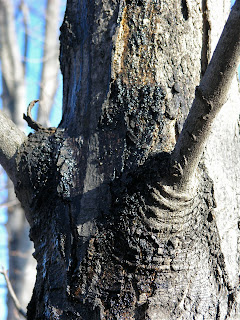 The dead pines and bleeding trees are stark warnings that we have pushed the biosphere over the limits of endurance. 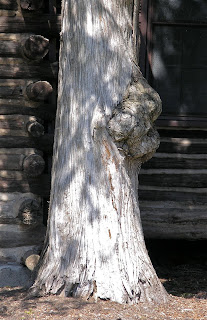 Lethal cankers and damaged foliage are likewise messages from organisms that have no other way to speak. 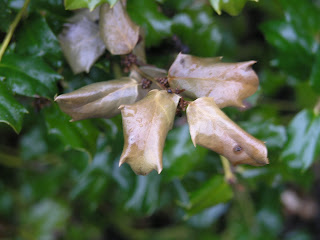 So many trees are losing bark in what is becoming ever more luridly, achingly brilliant. 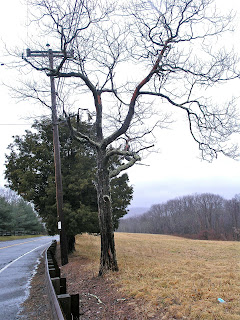 It is painful to look at the same way it would hurt to behold a horrible injury on a person. 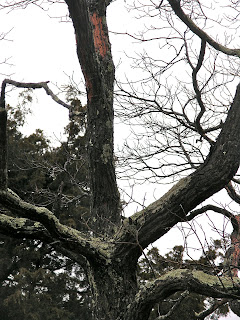 Today is very rainy and so it was hard to get a picture showing just how vivid the gashes in the branches and trunks are becoming. 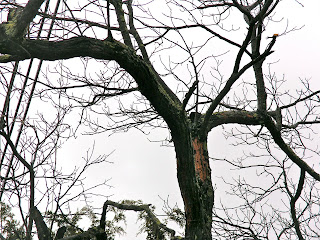 When I first passed this tree I thought it must have been painted with a neon color for some reason, and I turned around to go back and take a closer look. 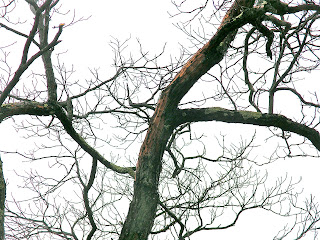 As this advances people will have to take notice. 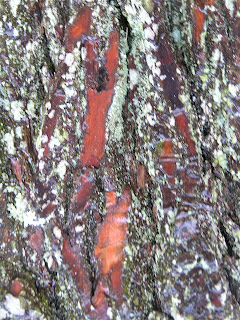 When they do I expect some weeping, wailing, and gnashing of teeth. 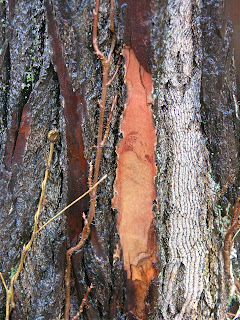 The implications of tree extinctions do not portend well for the future. This last BALDing (Bark Atrophy Lichen Decline) example is from a flowering pear in a garden. 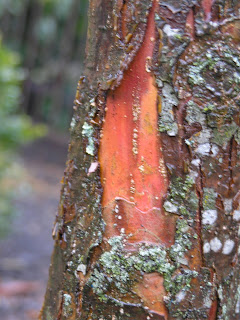 I have been thinking very hard about collapse having browsed through the last link I posted, to a discussion on ecoshock radio. It was a really shattering experience particularly because just after, Wit's End lost power for several hours and I realized how woefully unprepared I am to live without it for even a few hours, let alone days, or weeks. Which is ludicrous considering I KNOW that trees will be crashing into power lines in unprecedented numbers.
Further, it would be very imprudent to not expect society to break down fairly soon, once the general population realizes that, for instance, we are going to experience crop failures and severe food shortages - not just in Vietnam where drought is ruining the rice harvest, or Syria, or for sea lions, but for people, right here in the USofA.
People whose ideology won't allow them to concede that humans have been living unsustainably, and that we should have reined in the population explosion, and that we have been exploiting and destroying the very environment we need to exist, are going to go totally bonkers rather than admit any culpability.
Case in point, this deranged jackass who left two comments, one furiously after the other, at the forum on climate change I posted at the coffeepartyusa website...and please before reading first swallow whatever it is you are drinking or chewing so you don't choke once you start laughing uncontrollably! (With classic denier vehemence, it's in all caps, because why not!)

COFFEE PARTY IS FULL OF IDIOTS.

IDIOTS. WHO THE HELL ARE THESE YOUNG PEOPLE JOINING THIS DAMN PARTY? GET THE FUCK OUT OF HERE YOU DONT KNOW WHAT THE HELL YOU'RE TALKING ABOUT. I DONT THINK ANYTHING HAS EVER PISSED ME OFF MORE THAN YOUNG PEOPLE RUINING OUR COUNTRY BY VOTING FOR SOME HALF N HALF COLORED SOCIALIST. YOU OBVIOUSLY DIDNT KNOW WHAT THE HELL YOU WERE VOTING FOR, SO STAY AT YOUR HOUSE AND PLEASE DONT FUCK ANYTHING ELSE UP. DO SOME RESEARCH OR SOMETHING, YOU'RE JOINING SOME MOVEMENT YOU KNOW ABSOLUTELY NOTHING ABOUT.

YOU GUYS ARE IDIOTS

YOU IDIOTS NEED TO CONCENTRATE ON SOMETHING THAT IS WORTH YOUR TIME. CLIMATE CHANGE IS AN AL GORE MONEYFUND. WAKE THE HELL UP PEOPLE, THE SCIENTIST THAT ORIGINALLY CAME UP WITH THE GLOBAL WARMING THEORY, NOW SAYS IT WAS COMPLETE BULLSHIT AND THE WORLD HAS BEEN DOING THIS OFF AND ON FOREVER. WAKE THE FUCK UP YOU IDIOTS. DO SOMETHING CONSTRUCTIVE. THIS STUPID COFFEE PARTY SHIT, JUST A BUNCH OF DEMOCRATS THAT ARE EMBARRASSED TO BE DEMOCRATS ANYMORE BECAUSE THEIR PRESIDENT IS A FUCKING SOCIALIST LOSER. YOU GO ON WITH THE GREEN JOB BULLSHIT- EVERY GREEN JOB YOU MAKE ITS GONNA TAKE AWAY 2 REGULAR JOBS SO WAY TO GO. EVERYONE ONE OF MY PROFESSORS AT YALE THINK THIS IS ABSOLUTELY RIDICULOUS YOU PEOPLE NEED TO GET A LIFE. COFFEE MOVEMENT? HOW STUPID ARE YOU? AND ALL YOU YOUNG PEOPLE THAT HELPED RUIN OUR COUNTRY BY VOTING FOR OBAMA WITHOUT KNOWING ANYTHING ABOUT HIM, JUST BECAUSE THE IDIOT SAID WE NEED TO CHANGE YOU JUMP HIS DICK. COME ON. STAY AWAY FROM THE POLLS IF YOU'RE UNDER 21 I SAY. YOU PEOPLE DID NOTHING BUT HELP RUIN OUR COUNTRY. YOU DON'T KNOW ANYTHING ABOUT WHAT YOU VOTE FOR. IDIOTS DIDNT KNOW ABOUT HEALTH CARE WHEN YOU WERE VOTING FOR HIM MOST LIKELY. NOW LOOK AT THE MESS YOU MADE. JESUS CHRIST YOUNG PEOPLE SHOULD NOT BE ALLOWED TO VOTE, THAT OR THEY SHOULD HAVE TO PROVE THEY KNOW WHAT THE HELL THEY ARE VOTING FOR. SCREW THE REPUBLICANS TOO. YOU PEOPLE NEED TO GET A LIFE.