Last week I went from Bernardsville to Morristown and was shocked, shocked to see the massive clearing of very large trees by the power company - but I didn't have time to photograph them. 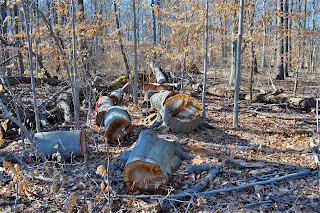 No doubt the mess would have been cleaned up before I passed by again today, but for the storm damage and ongoing power outages from this past weekend - about which Mayor Bloomberg told the AP, "Thousands of trees fell in New York City alone." I pulled over and snapped these in a walk of about 500' - I could have wandered for miles taking more and more pictures - but it's an unpleasantly busy road and I had other things to do - besides, what's the point? 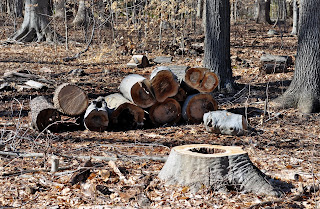 JCP&L is usually more circumspect to dispose of the corpses before many people get a chance to witness them and wonder what the hell is going on. I called them a while ago to get information about their tree-cutting policy. 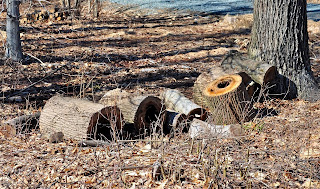 On this webpage is a description of the vegetation control program that was revised by the Board of Public Utilities in response to a massive power outage caused by a falling tree. They have full-time foresters as consultants but they're not allowed to talk to members of the public, and I could get no information from the representative who talks to the media about how much material they remove, and how it compares over time. He sent me some bullshit brochure in the mail. 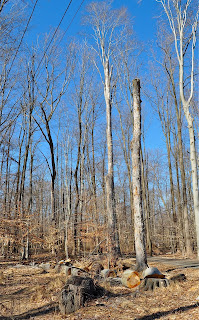 It's quite apparent that all of these trees have one or more problems related to exposure to toxins in the atmosphere. 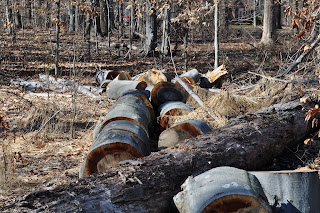 All of them have rot in their trunks. 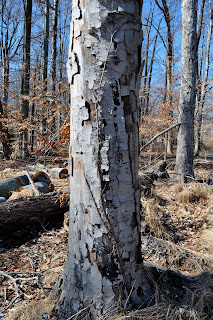 And quite a few have the BALDing syndrome (Bark Atrophy Lichen Decline). 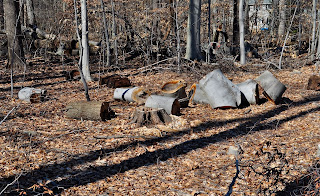 There is an enormous pile of toppled trees in the background, above. 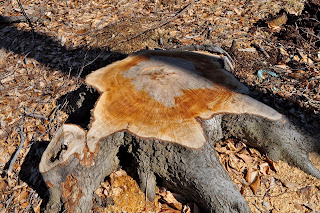 It's clear that all of the species of mixed hardwoods present are equally affected - because they all need to photosynthesize, and that is what ozone prevents the foliage from doing. 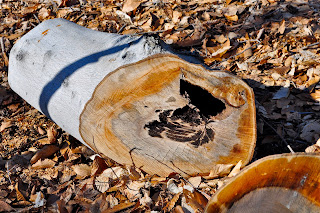 Also perfectly obvious is that trees of all ages are equally affected. 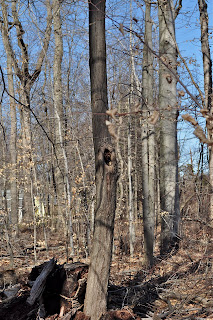 Climate Progress has a story of keen interest to me, about research detecting a global decline in forests (finally!) which the authors attributed to climate-change induced drought and warming. 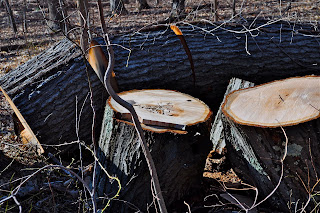 The lead author of this study is a Forestry Department employee who inspired an earlier witsend post, "Scientists are Egomaniacal Douchebags." I realize now why he refused to entertain any idea about the potential role of ozone or ethanol emissions in tree damage - he had a major paper coming out with a bunch of co-authors, and was wedded to their theory. 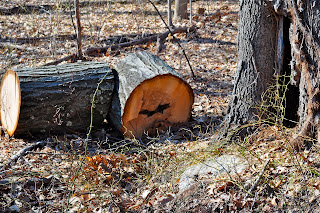 It's ironic because from the time I first realized all the trees are dying (summer of 2008) until last summer when the foliage of trees and plants that couldn't possibly be suffering from any lack of water (aquatic and potted and irrigated plants) exhibited the same symptoms as trees in forests, I too believed that climate change drought was the most likely cause. 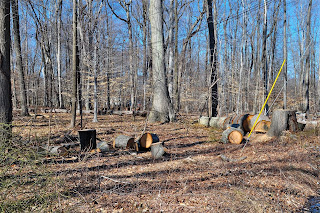 I admit, I actually felt sort of offended when some others first suggested ordinary, dirty pollution might be to blame. It was only very reluctantly that I concluded it has to be direct toxic effects that are the most urgent threat to trees - and to sources of food. 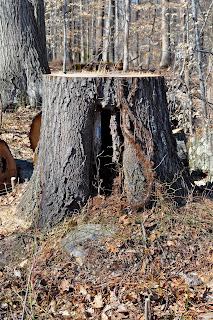 Thus I was interested to see today that I am not the only person who detects a (pointless) schism between "environmentalists" and CO2-obsessed climate change scientists:
What follows is a comment on this story (a heartbreaker) by George Monbiot about the loss of biodiversity:

Biodiversity? No one cares. I've been trying to raise awareness where I work for 5 years (in a very prestigious educational institution cough cough that cannot be named) and no one there wants to listen. Everyone's obsessed with carbon (which of course is important) but they don't understand the role biodiversity has in our survival at all, and the relation to our consumption rates. I really don't think there's any hope anymore for us (all greened out). Sorry. 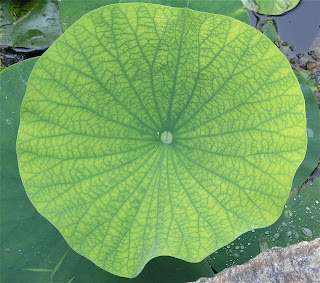 Here is the nexus of my mental transformation. The lotus leaf in July 2009 (which by the end of the summer was nothing but a brown web) exhibits the same loss of pigment from chlorophyll, and prominent veins that are symptoms of exposure to ozone, as the (abnormally small) maple leaf. 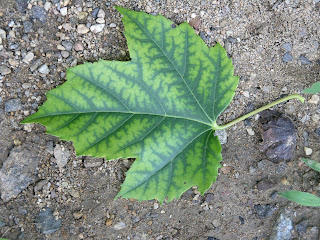