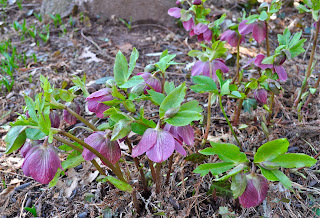 The signs of spring should be accompanied by exhilaration and joy. 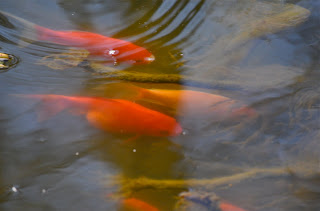 But quite frankly, the unnatural warmth is frightening. 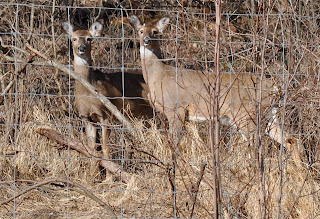 Early flowers such as the hellebores and snowdrops are to be expected and welcomed. 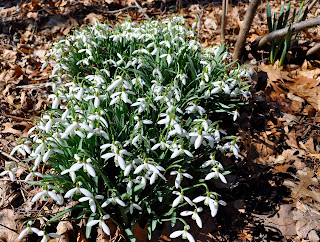 I think there must have once been a house on the parcel near the village, because there are so many clumps of snowdrops scattered under the trees. 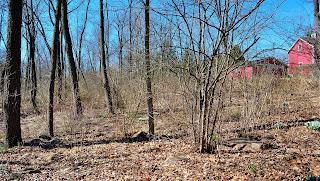 Skunk cabbage is emerging in wet places, such as along this little brook. 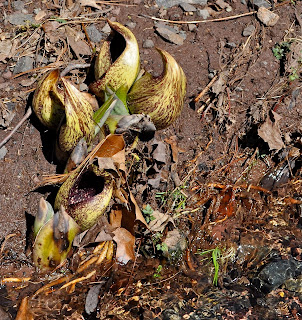 As the season is unfolding, two disturbing trends are already apparent. 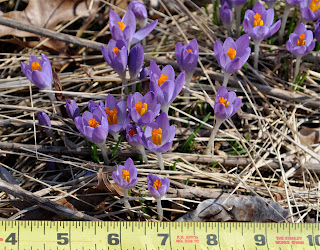 One as I mentioned earlier is that snowdrops and crocus are much smaller than normal. 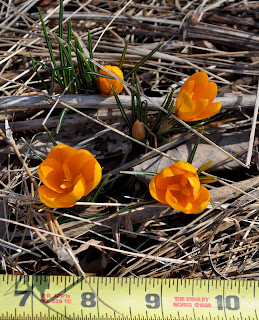 It's too soon to tell if the same will hold true for tulips or daffodils. 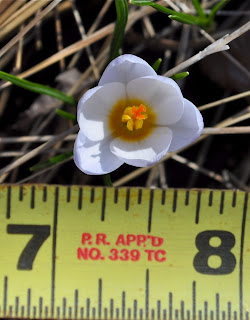 The other bizarre trend is for blooming out of order. 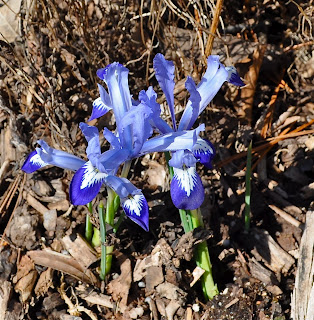 Mid-march is WAY too early for iris! 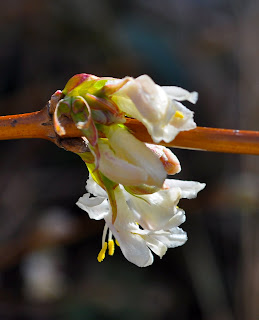 My exotic Chinese witchhazel was budding out weeks ahead of schedule, and has now fully opened in the warmth and makes the air at Wit's End smell divine. The early-blooming ornamental weeping peach is ready to burst open as well, I can't wait! I planted it about five years ago, a tiny stick back then. 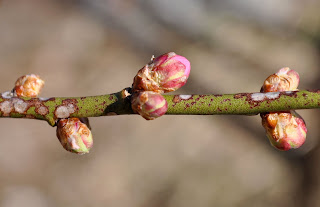 For a number of years now, I have been complaining, without realizing the significance, that spring has been just about eradicated. We catapult directly from winter to summer with barely a pause. Considering the current unseasonably warm weather and beating sun I am dreading a brutally hot and dry summer punctuated by extremely violent storms. 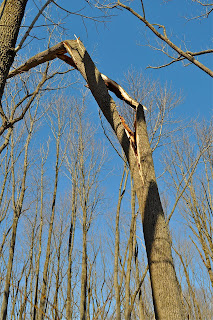 There is no question that our release of greenhouse gases has warmed the earth, made the weather go berserk, and is killing the trees. Climate Progress has a fun list of freak weather occurring around the globe. 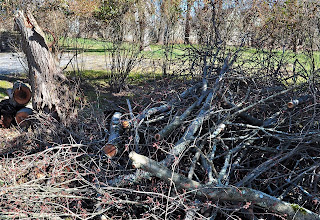 This tree was budding out and then just fell down. 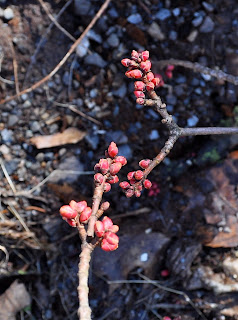 The interior was rotted. 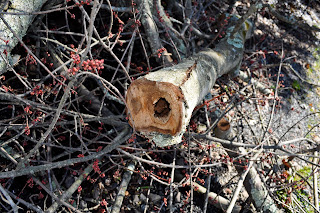 The lichens are getting not just more widely disbursed but thicker. 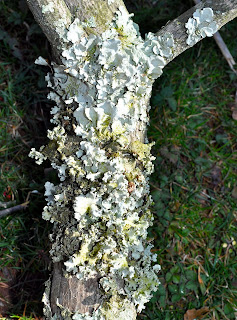 Here's the trunk - it may have been an apple tree - if so it was budding out before any others, perhaps in a desperate attempt to reproduce before collapsing. 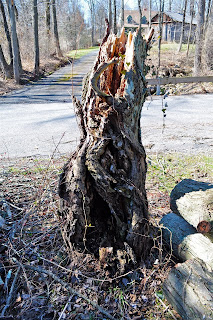 I realized today that my subliminal impression that the dawn redwoods look odd was correct. They are festooned with fringes of tiny seeds. Normally they just have bare branches, and blend in with the other deciduous trees after they drop their needles in the fall. 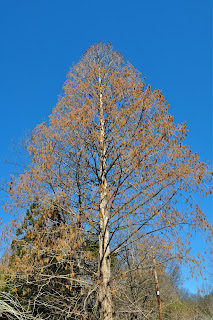 The base of this huge specimen is showing signs of rot. 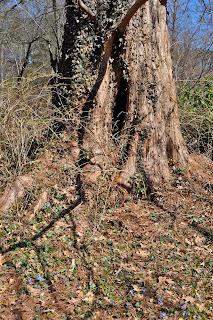 The ground below is sprinkled with scilla. 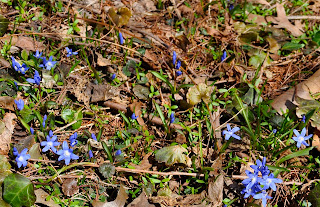 This tree is covered in ivy that has turned an unpleasant color. 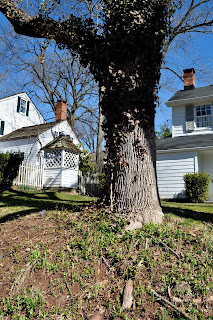 Everywhere the amount of earth that is bare mud is unusual. Much of the vinca groundcover is just missing. 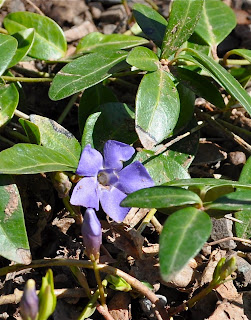 There are fallen ivy leaves scattered on the ground. 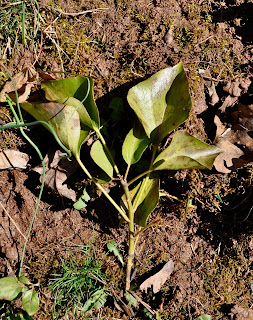 It took me until the summer of 2008 - almost two years ago - to understand how seriously and permanently humans have despoiled the earth. Others I have since met have been cursed with this knowledge for far longer, as these two poems published over ten years ago, posted at the coffee party website, attest in poignant verse:
Static

There is a lot of static on the air waves.
Turn the dial, it's all hiss and then some garble.
We're in some minor kind of heat wave,
that's all that you can hear among the babble.
Ninety-three degrees up at the airport.
Four days within September, two broken records.
Some kid shut up his school by making threats;
a house a-fire, another woman dead;
the papers pages filled with theives and liars.
The truth among the news you barely see
consumed by all the senseless tragedy.
Over forty island nations going under -
very very slowly slipping under -
by the melting of the icecaps, and rising of the sea.

Warmth, morning's early promise, no avail,
cold damp descends in darkness on the land.
The flaming trees too quickly stripped by gales
that leave the branches hung like barren hands.

Morning after morning, the sky seems mourning.
It weeps it's little bitter acid tears.
The heedless hands of men have wrought this burning
bitter rain, without a care, concern, or fear.

Beware, this is Nature's silent warning:
a greater madness man is spawning.

these poems were published in the Vermont Times, November 24, 1999 and were written by the author of this blog.

Now for today's exploration into the bewildering realm of atmospheric chemistry (thanks to a tip from RPauli!):
The giddy self-congratulation by politicians and environmentalists who claimed to have solved the ozone hole in the stratosphere by replacing CFCs with HCFCs always struck me as premature and is now, many years later, being tempered by this study which demonstrates how HCFC's can turn into oxalic acid - a "corrosive ingredient" - once released into the high atmosphere.
Gee, I wonder what that is doing when it falls back to land? And I love love the way the article ends - saying the researchers believe their model can help "determine whether replacements for the replacements are as eco-friendly as they appear before manufacturers spend billions of dollars in marketing them" and neglected to mention and kill every tree on the planet.
Wikipedia says: "Oxalic acid is also an important reagent in lanthanide chemistry" under the heading "Extractive Metallurgy" so maybe, it is having some effect on all those heavy metals like mercury? It also says, "It forms an acid chloride called oxalyl chloride" and now, where did we just see something or other about the surprising appearance of chlorine? oh yeah, here! And then, it says it can be manufactured using ethylene glycol. Oh, does that have anything to do with ethanol emissions? I don't have a clue, and I bet, neither does anybody else. It's a wild, wild mix of chemicals in our atmosphere, and nobody understands what is developing up there, or how caustic it might to be foliage, soil, water, or lungs.
No wonder this is the response I got to my latest letter to a researcher of the chlorine reference linked to above:
Dear Gail, thanks for your interest in this research. My expertise is in atmospheric chemistry and not in impact on vegetation but I would be very surprised if the kind of chemistry that Thornton et al have discovered could have led to rapid increases in ozone and decline in tree health over just a few years. What might have happened is that a decline in air quality over the last decades has affected the vegetation to a point where the self-defense of trees/vegetation has been severely hampered, leading to a greater vulnerability to natural pests, which could then have led to the rapid decline that you observed. But again: this is not my field and you should probably ask this question to a biologist. With regard to air quality changes, have a look at the webpage of the AIRMAP program which doesn't cover New Jersey, but states to the north: http://airmap.unh.edu/ Maybe you find more information there. Best regards, Roland von Glasow
And here is my answer:
It was very kind of you to reply.
Unfortunately, it appears most biologists do not give a second thought to the atmosphere, they mostly take it for granted. It is quite likely that chlorine is not the culprit in the decline I am observing, on the other hand, it's not primarily due to long-term, cumulative ozone exposure leading to increased vulnerability to insects or disease (although that is of course happening), because that does not account for foliar damage in annual potted plants, both indoors and out, which really only just started last summer.
Something unprecedented is going on in the atmosphere. It's too bad atmospheric experts aren't conferring with biologists, because it is in that intersection that the answer is to be found.
Hopefully before complete agricultural collapse.
Regards,
Gail
Posted by Gail Zawacki at 11:30 PM